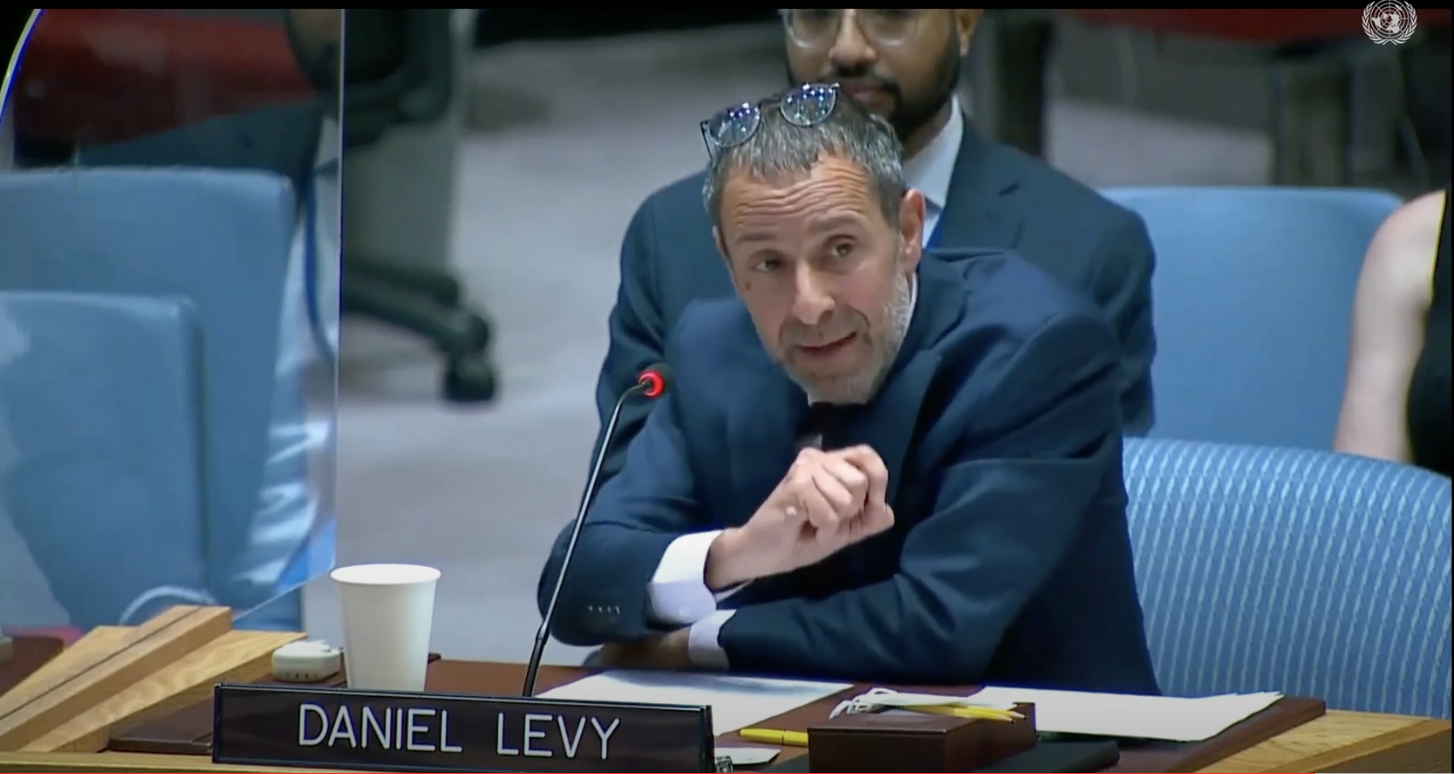 Meeting of the United Nations Security Council, Thursday, August 25, 2022
“The Situation in the Middle East Including the Palestinian Question”

I would like to thank the Council and the Chinese presidency in particular for allowing me to share some thoughts with you today. The events of earlier this month covered in detail by Special Envoy Wennesland are as concerning as they are predictable. To be very clear, Israelis deserve security; Palestinians deserve security.

Mr President, month in and month out the Council meets to repeat its familiar condemnations, formulas and slogans. I want to use this opportunity to rethink and re-appraise some assumptions and beliefs that may inadvertently contribute to the intractability in Israel-Palestine—to consider afresh, reasons why this conflict remains so prone to stalemate and human suffering.

I suggest to do this through 5 concepts that may assist us in such an endeavour:

First, Justice: The permanent dispossession and denial of the most basic rights and freedoms to the Palestinian people will never be a recipe for achieving sustainable security: this, the illegal blockade of Gaza and the unlawful occupation, represents forms of structural violence and collective punishment that we cannot ignore.

While the need for a political horizon is acknowledged, the dimensions of that horizon shrink and shrivel, becoming ever less ambitious.

There can be no effective or prolonged approach to Gaza in isolation—it is part of broader Israeli-Palestinian realities—in terms of security, the separation policy and closure. And crucially, there is a need to respect international law across the board—whether in state responses to armed threats or partisan resistance against state occupation.

Also in this context, there is a need for Palestinian political renewal, internal reconciliation and overcoming of divisions as well as an international need to engage all relevant actors without applying unrealistic and selective preconditions.

Second, Equilibrium: Any attempt to resume negotiations between the parties without addressing power asymmetries is a hollow and redundant exercise. As Comfort Ero, president of Crisis Group—with whom my organization the U.S./Middle East Project cooperates extensively—noted to this Council recently— “the structural power imbalance between an occupying state and an occupied people must be acknowledged.” A focus on relations of power rather than both sides-ism offers a path to clarity of thinking and policy.

As an example, attempts at economic confidence building measures are consistently too little, too late, and too ephemeral when attempted under conditions of a permanent, relentless and expanding matrix of occupation. This defies principles of harmony and reciprocity.

Especially with global resources stretched thin, the Palestinian economic predicament must be understood primarily as a function of politically imposed obstacles—on movement, borders, access to land, confiscations, demolitions and ever-expanding settlements—rather than an absence of charity. Economic palliatives under occupation deepen dependence and enmity.

We have heard the briefing of UNRWA Commissioner General Lazzarini. There must be an
economic commitment to a predictably resourced UNRWA capable of delivering services, not only a security necessity but also a political commitment to the Palestinian refugees who continue to be denied a solution.

Third, Accountability: I have previously highlighted to this Council two core problems; a legitimacy deficit in Palestinian politics and an accountability deficit viz Israel’s policies. It is Israel’s actions as the powerful occupying party that pre-eminently determine the direction of travel of this conflict.

Profound shifts are occurring as a result of the unwillingness to hold Israel to account not least on settlements.

Recent months have witnessed a disturbing intensification of that trend as Israel has targeted those least able to protect themselves and those most in the frontline bearing witness to violations of international law.

Following the shock expressed by Secretary General Guterres over the number of Palestinian children killed and maimed by Israeli forces last year, we have continued to see the same trend and suffering among the very young in Gaza this month.

We have witnessed the killing of those who report on and expose these crimes, Shireen Abu Akleh, being the latest journalist to pay with her life. And now the assault on those who document abuses and defend human rights, as well as community service providers, with Israel’s actions against six prominent Palestinian civil society organizations.

Following a terror designation having been made against the six NGOs by the Israeli authorities, a number of countries went on record that compelling evidence had not been forthcoming. Now in the past week, the offices of these organizations have been raided and shuttered and their workers interrogated.

A response limited to expressions of condemnation is too easily dismissed. This is impunity on steroids, it encourages more of the same or worse.

There should be practical consequences at a multilateral and bilateral level. We already have a hollowed out Palestinian polity and economy; this is now an attempt to emaciate Palestinian civil society.

Fourth, Context: It is no exaggeration to characterize the current global disorder as a world in metamorphosis—dangerously combustible while potentially rewarding if we can be innovative while realistic.

In this respect, the Abraham Accords can be many things, but they cannot be a substitute or distraction from securing peace and the rights of Palestinians. If not properly managed, normalisation risks further nurturing a misplaced Israeli sense that the Palestinians can be ignored and marginalised.

It is also the case that international law and principles purported to be universal cannot be asserted only when it is convenient and then set aside when friends or allies appear in the role of perpetrator. Our world is too transparent, these things are noticed.

Fifth and finally, Architecture: I would suggest that contrary to a prevailing perception of stuckness and stalemate, in actual fact, Israelis and Palestinians are passing through a quite profound transition.

Let me close by briefly explaining why.

Talk of the eclipse of a two-state option is neither alarmist nor farfetched, rather, it is a sober and probably behind-the-curve rendering of the lived reality. I would say that for Israel itself, the absence of an off-ramp on this journey toward a new paradigm should be cause for concern—placing in jeopardy that country’s future.

Neither Palestinians nor Israelis will disappear and finding a just way to live together has never been more urgent.

This profound shift will, over time, likely take every state represented here out of their comfort zone.

We know of certain developments that can at the same time be both politically uncomfortable and politically salient. The increasingly weighty body of scholarly, legal and public opinion that has designated Israel to be perpetrating apartheid in the territories under its control is just such a development.

This is what the failure to generate accountability and to achieve two states looks like.

As uncomfortable as it is for some, I urge his chamber not to underestimate the longer-term significance and traction of what is happening. At the Human Rights Council meetings in Geneva this March, states speaking on behalf of the African group, the Arab group and the OIC group, all referenced this apartheid situation.

It will come as little surprise if this echoes and resonates in parts of the world that have experienced apartheid and settler colonialism and have gone through decolonisation. It is a paradigm that will also bring the discrimination faced by Palestinian citizens of Israel into sharper relief.

It must be a wakeup call.

75 years ago, this United Nations offered partition as the political paradigm for the Holy Land. Today that land is de facto united under one dominion.

Absent unprecedentedly far-reaching action to make good on partition, your successors in this chamber will come to debate the challenge of achieving equality under a reality of non-partition.

Mr. President, if the Council seriously considers these five principles and their implications, we may find a way out of the repetitive impasse—the familiar condemnations, formulas and slogans—and perhaps usher in a new opening and path to justice and equilibrium for Palestinians and Israelis.

Daniel Levy is president of the US/Middle East Project (USMEP) and a member of the European Council on Foreign Relations (ECFR). He was an advisor to Israeli Prime Minister Ehud Barak, an Israeli official for Israel/Palestine talks under Barak and Itzhak Rabin, and a founder of J Street.