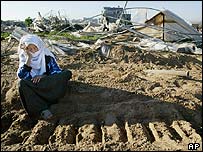 Thousands of Palestinians have had homes and livelihoods demolished.

The company supplies armoured bulldozers to the Israeli army that are used to demolish Palestinian homes.

Human rights official Jean Ziegler expressed “deep concern” over the sales, in a letter to Caterpillar.

The company says it shares world concern over the Middle East but it cannot police the use of its equipment.

Human rights groups estimate that around 3,000 Palestinian homes have been demolished since 2000.

Israel says the demolitions are necessary on security grounds.

Mr Ziegler is the UN High Commissioner on Human Rights’ Special Rapporteur on the right to food.

In his letter, he described destruction by the bulldozers of “agricultural farms, greenhouses and ancient olive groves”. 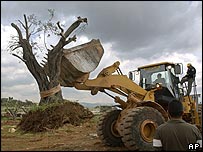 Caterpillar says it is not its job to police use of its equipment.

Caterpillar’s actions in supplying the D-9 and D-10 bulldozers mean they may be complicit in violating the right to food, Mr Ziegler said.

Over 50% of Palestinians are already largely dependent on food aid.

Human lives had also been lost during the demolitions, Ziegler wrote, including that of American peace activist Rachel Corrie.

In an April report on Palestinian home demolitions, they called on Caterpillar to “guarantee that its bulldozers are not used to commit human rights violations”.

In a statement on its website, Caterpillar says it “shares the world’s concern over unrest in the Middle East and certainly have compassion for all those affected by political strife”.

Nevertheless, it has “neither the legal right nor the means to police individual use of its equipment,” the statement says.

Campaigners have claimed that this is a direct contravention of the company’s own corporate responsibility policy.

The policy states: “Caterpillar is committed to enabling positive and responsible growth around the world, and we believe in the value of social and environmental responsibility.”

The company reported profits of over $1 billion last year.