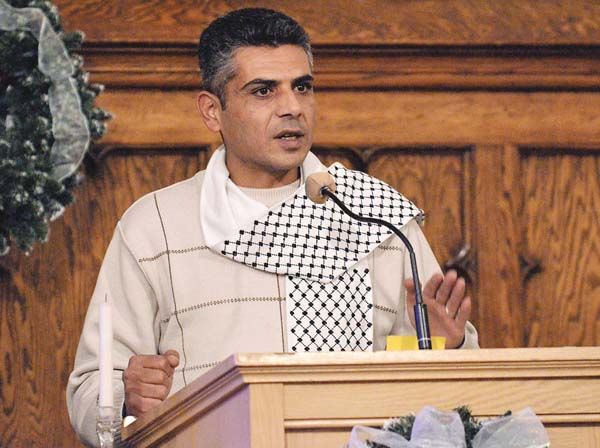 On Sunday afternoon, December 16, citizens of the Madison area were fortunate to hear a presentation by Iyad Burnat, a Palestinian farmer and leader in non-violent protests currently on a four-month speaking tour of the United States. About 60 people gathered at Memorial United Church of Christ in Fitchburg to view photos and videos and to listen to stories of successful organizing of grassroots non-violent protests against Israeli occupation in a West Bank farming village called Bil’in.

Since the 1967 war, Israel has illegally occupied and expanded its military presence in the Palestinian West Bank, Gaza, and East Jerusalem in defiance of UN Security Council resolution 242 and many others which demand “withdrawal of Israeli armed forces from territories occupied in the (1967) conflict.” It has placed nearly 500,000 illegal Israeli Jewish settlers on Palestinian land in direct violation of international law.

In 2003, Israel began building a hugely controversial “separation wall” primarily on the Palestinian side of the “green line” between the West Bank and Israel proper. Burnat reported that the wall, which is 8 meters high in some places, has taken over half of Bil’in’s farm land.  It was in opposition to this wall that Bil’in citizens began their weekly marches to the fenced area.  Since 2005, Bil’in farmers have been joined by Israeli and International peace activists and protests have spread to about 20 other villages in the West Bank.

The videos showed creative methods used by from 200 to 4000 demonstrators every Friday and the violent response from Israeli soldiers. Demonstrators repeatedly endured injuries from tear gas rockets, chemical infused water, and rubber-coated metal bullets.  Burnat reported 40 deaths and 1,300 injured among all the villages. He argued that the goal of Israel’s separation wall is not security but the confiscation of Palestinian land for Israeli settlers, the theft of Palestinian water to supply them, and to put more Palestinians in prison.

In a soft-spoken voice, Burnat explained that the “olive tree is the life of farmers in this area.”  He showed videos of demonstrators chaining themselves to olive trees and of the burning and bulldozing of olive groves, noting sadly that many Palestinian farmers who used to sell olive oil now have to purchase it.  As a result, over 60 percent of Palestinians are unemployed in Bil’in.

Burnat graphically described the hardship of Palestinian farmers and their families under the Israeli occupation: diminished farm land due to the separation wall, Jewish-only roads and settlements; lack of freedom of movement due to checkpoints and roadblocks; running water limited to one day per week or less; and nighttime curfews and raids that especially terrorize village children.  He observed that the Israeli settlement enterprise has now made it impossible for an Israel-Palestine two-state solution for peace in the region.

Burnat was asked how the Palestinians can maintain their commitment to non-violent protests in the midst of a very militarized Israeli opposition. Burnat said he finds hope from the solidarity with the other Palestinian villages, the support of the people who join from outside, and his firm belief that they will succeed in ending the occupation.  He cited the success of Martin Luther King, Nelson Mandela, and Mahatma Gandhi in ending oppression.

Burnat was also asked if he was troubled by the violent means used by others such as rockets shot out of Gaza. Burnat observed that Hamas is always blamed for violence when, in fact, the Israeli government wants to provoke such violence, such as when Israel recently assassinated the Hamas representative who was involved in peace negotiation talks. He asked the audience to remember that Hamas has been in existence for 25 years whereas the violent Israeli occupation of Palestine is 65 years old. He noted that in Bil’in, Israel has even sent “special forces” disguised as Palestinians to throw stones in order to justify the violent response from the Israeli soldiers.

Burnat holds on to the hope that through non-violent grassroots movements, unity among Palestinians, and pressure from the international community Israel can be forced to end its siege and occupation of Palestine. Burnat also stated that the only chance for permanent peace is through a one-state solution with equal rights for all where “we can all live together.”  He invited people to Bil’in as “all the families will welcome you,” reporting the Palestinians are not against Jewish people, only against the illegal occupation.

When asked what Americans can do to support the Palestinian people, Burnat pointed out that Palestinians view the United States as part of the occupation, not just helping the occupation. He noted that most of the weapons used against the Bil’in villagers are made in the USA. He asked for Americans to divest their support for companies that financially benefit from occupation.  Without the billions of dollars and support from America, Burnat said, Israel would not be able to continue with its oppressive policies.