A Call to the Environmental Justice Movement 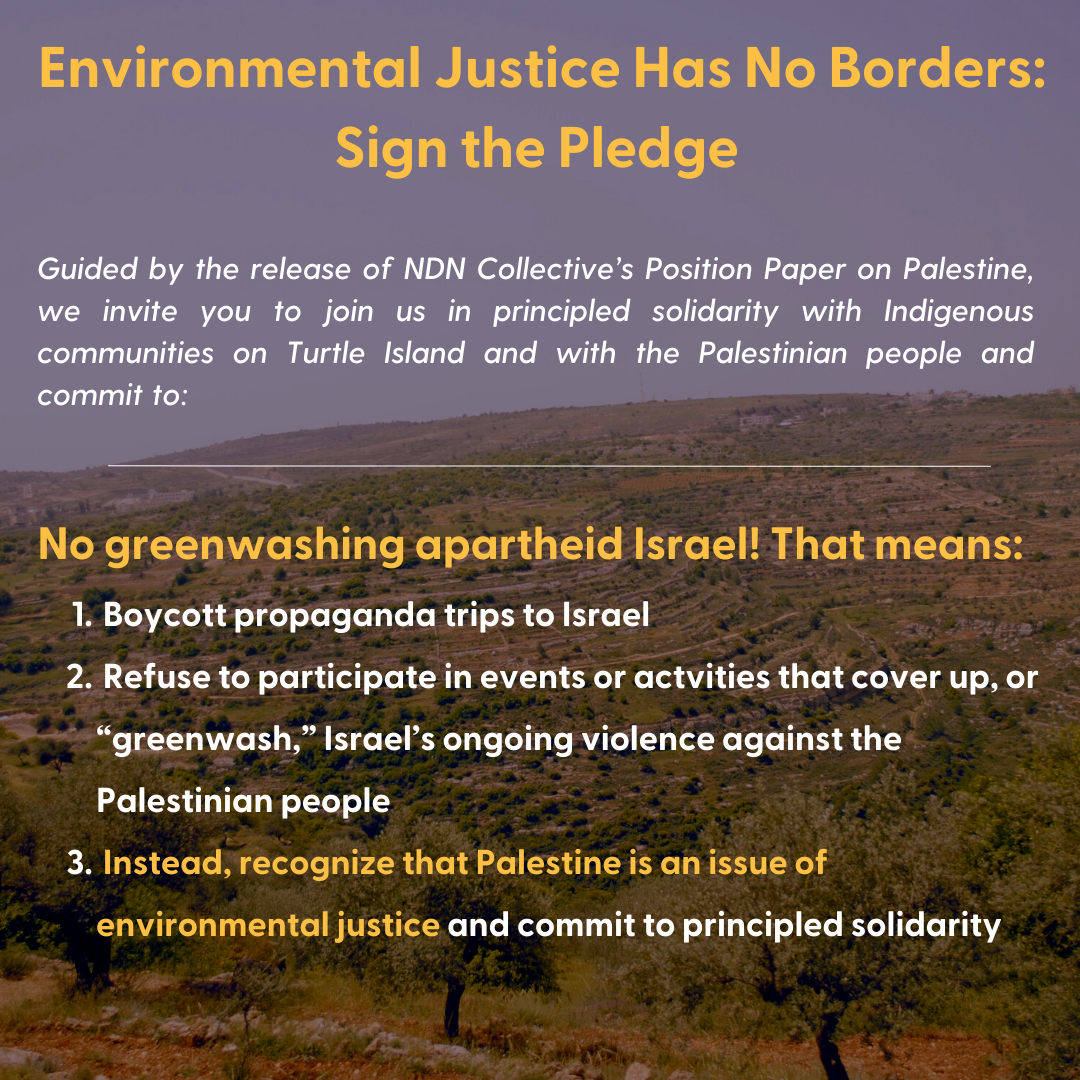 Israel violently forces Indigenous Palestinians out of their homes and off their land, and harms the environment in the process. Join us in supporting Palestinian freedom and environmental justice by signing and sharing the Environmental Justice Has No Borders Pledge. Together, we can center Indigenous rights and oppose Israel’s settler colonialism.

Guided by the release of NDN Collective’s Position Paper on Palestine (https://ndncollective.org/right-of-return-is-landback/), we invite organizations and individuals to join us in principled solidarity with Indigenous communities on Turtle Island and with the Palestinian people and commit to:

No greenwashing apartheid Israel! That means:
1. Boycott propaganda trips to Israel
2. Refuse to participate in events or actvities that cover up, or “greenwash,” Israel’s ongoing violence against the Palestinian people
3. Instead, recognize that Palestine is an issue of environmental justice and commit to principled solidarity

WHY PLEDGE TO UPHOLD ENVIRONMENTAL JUSTICE ACROSS BORDERS?

The fight for environmental justice has no borders. Ensuring the survival of land and people anywhere requires that we oppose settler-colonialism, militarism, land theft, and environmental destruction everywhere.

This pledge is being released on Land Day, a day marking Palestinian protest against violent Israeli removal from their lands, and comes in the aftermath of an incident that highlighted the dangerous persistence of support for colonialism in the environmental justice movement. Recently, the Sierra Club canceled its March trips to Israel. That was the right thing to do: propaganda trips to Israel are harmful to Palestinians and the land they live on, and help cover up Israel’s oppression of Palestinians. But after facing backlash, The Sierra Club, an organization with a history of violence toward Indigenous communities in the U.S., backtracked on its commitment to cancel its trips. The Sierra Club’s reversal is an insult to Indigenous communities everywhere.

Conservation trips to apartheid Israel help the Israeli government cover up, or greenwash, the injustices of the Nakba and Israel’s ongoing oppression of Palestinians.

The Israeli government claims to be environmentally friendly but in reality, Israel is stealing Palestinian land and destroying the Palestinian environment. Indigenous Palestinians have cultivated and cared for the land for centuries and their call for solidarity should be respected. Just two examples of Israel’s impact on the environment:

1. Forests: Israel has uprooted over 800,000 native olive trees owned by Palestinians and planted forests where nearly 9 in 10 of the trees planted are invasive species that harm the land and the people. Israel’s planting of non-native trees has resulted in rapid desertification.
2. Water: In 1967, Israel took control over Palestine’s water resources and continues to restrict Palestinians’ access to water. Israel sinks wells and taps springs, forcing Palestinians to buy back their own water. This is harmful to Palestinian farmers and all Palestinians.

As a coalition of racial and social justice organizers, we call on the Sierra Club to uphold its basic responsibility to stop harming Indigenous struggles and drop these greenwashing trips. We invite other environmental justice and conservation organizations to be guided by NDN Collective’s new Position Paper on Palestine (https://ndncollective.org/right-of-return-is-landback/), and sign our Environmental Justice Has No Borders pledge. The pledge asks organizations and individuals in the environmental justice movement to center Indigenous rights by heeding the Palestinian people’s call for boycott, divestment, and sanctions (BDS) of apartheid Israel, including ceasing “greenwashing” activities and propaganda trips.

This is a moment of deeper reckoning for the conservation and environmental justice movements writ large: Indigenous peoples know intimately the violence of dispossession, displacement, and settler-colonialism, and most organizations remain complicit in this violence. Our collective call-out of Sierra Club only highlighted the need for justice that was long past due: Environmental, climate, and Indigenous justice all necessarily require divestment from the U.S. military, the single largest consumer of fossil fuels globally that enforces the occupation of Indigenous sovereign lands, from Turtle Island to Palestine. Repairing harm to Indigenous communities starts with actively resisting settler colonialism through concrete commitments to resist militarism, including refusing to participate in the propaganda that props up these policies.

Colonization and erasure of Indigenous people is never green—it's deadly to people and the planet.