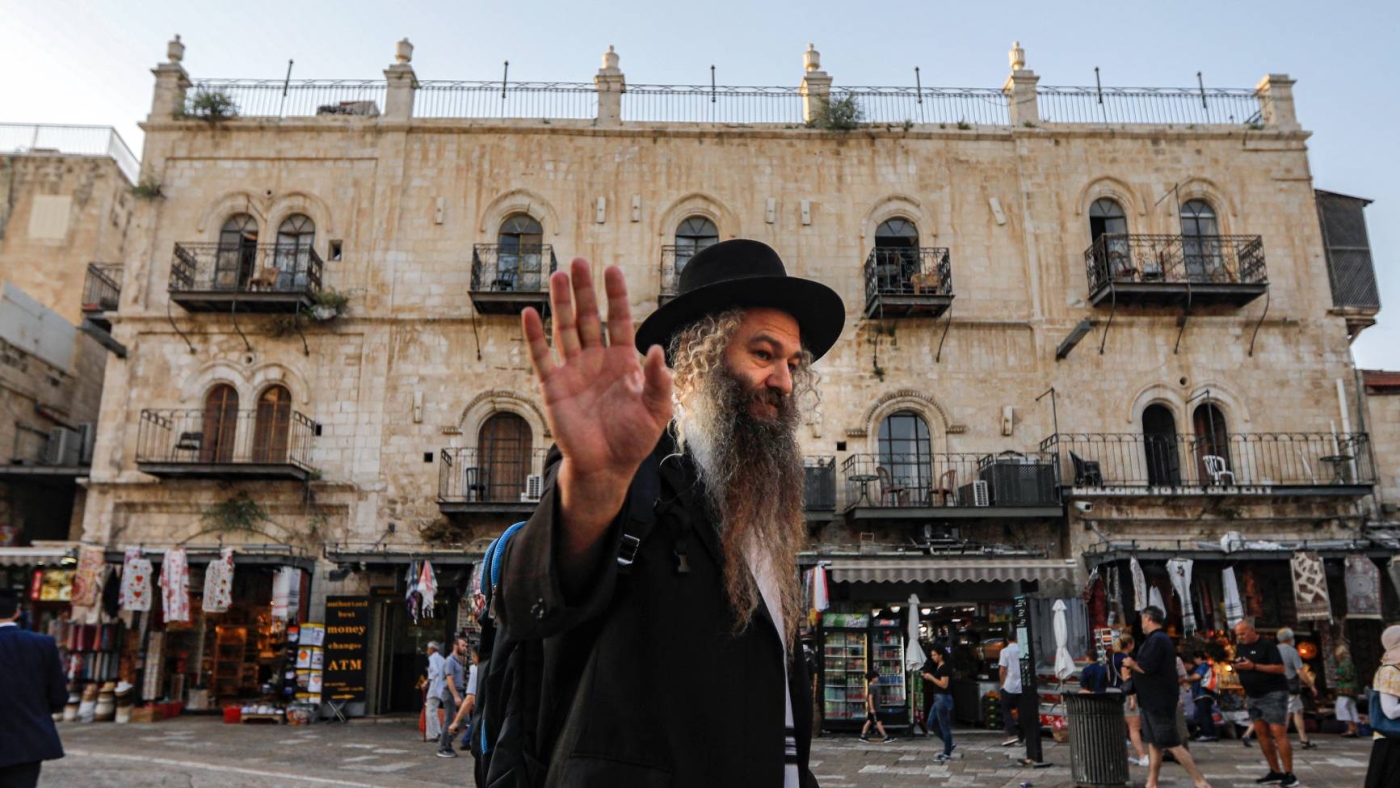 An Orthodox Jewish man raises his hand as he walks past the Petra hostel in the Old City of Jerusalem near the Jaffa Gate, 11 June 2019 (AFP)

Israeli police and settlers have taken control part of the historic Petra hotel, the subject of a years-long legal challenge between the Greek Orthodox Patriarch and settler group Ateret Cohanim, in the Old City of occupied East Jerusalem.

On Sunday evening, dozens of Israeli policemen and members of Ateret Cohanim moved into the first floor of the hotel, near Jerusalem’s Jaffa Gate.

‘The settlers’ intrusion came without any right and without any legal justification. We are the owners of the right to protect the hotel, which will remain an Arab property’ — Basma Qirresh, owner

The area is part of the Christian quarter in Jerusalem and is located strategically near the western walls of the city, which is thriving with tourists and pilgrims visiting the Church of the Holy Sepulchre.

Petra has been the subject of an 18-year legal battle between the Greek Orthodox Patriarchate and Ateret Cohanim, a powerful and active settler group that pushes for increased Jewish presence in East Jerusalem neighbourhoods.

In 2004, Ateret Cohanim bought the leases to Petra’s first floor and two other properties owned by the patriarchate in the Old City through three foreign private companies.

The patriarchate controls the top floor of the Petra which it leases to the Qirresh Palestinian family.

The buildings are highly sought after due to their strategic position in both the Christian and Muslim quarters of the Old City.

Some Palestinians gathered outside the hotel and performed the evening prayer in protest.

The Qirresh family, who rent the building from the patriarchate and run the hotel, said that the Israeli police and settlers were trespassing on their property.

A settler attacked Medhat Deeba, a lawyer for the family, with pepper spray. Deeba was later detained for questioning for six hours.

Deeba told local media that “the settlers stormed the hotel by force without any decision enabling them to do so. The case has been in the courts for 20 years to protect the property from danger.”

He was in the area with lawyer Maher Hanna to provide legal advice to the Qirresh family. Israeli police installed a gate on Sunday between Petra and the adjacent Little Petra hotel.

Ateret Cohanim has filed another lawsuit to evict the Qirresh family from the entire building. The American Road: A bypass for Israeli settlers, a
nightmare for Palestinians

Deeba told Wafa that the Israeli eviction order, which was carried out on Sunday evening, does not name the Qirresh family.

Basma Qirresh, a member of the family, told Wafa: “The settlers’ intrusion came without any right and without any legal justification. We are the owners of the right to protect the hotel, which will remain an Arab property, and we will not allow settlers to seize it.”

The hotel lies in the east of Jerusalem’s Old City, which was occupied by Israel in 1967. Israeli settlement in East Jerusalem, which the Palestinians see as the capital for a future state, is illegal under international law.

The revelation of the patriarchate’s deals with Ateret Cohanim in 2005 prompted anger and protests among the church’s Palestinian community.

With the patriarchate mired in controversy and allegations of bribery and fraud, Patriarch Irenaios was dismissed and replaced with Theophilos III that same year.