Widely regarded as the most blessed time of the year, Palestinian families in Gaza wait all year for the olive harvest season. 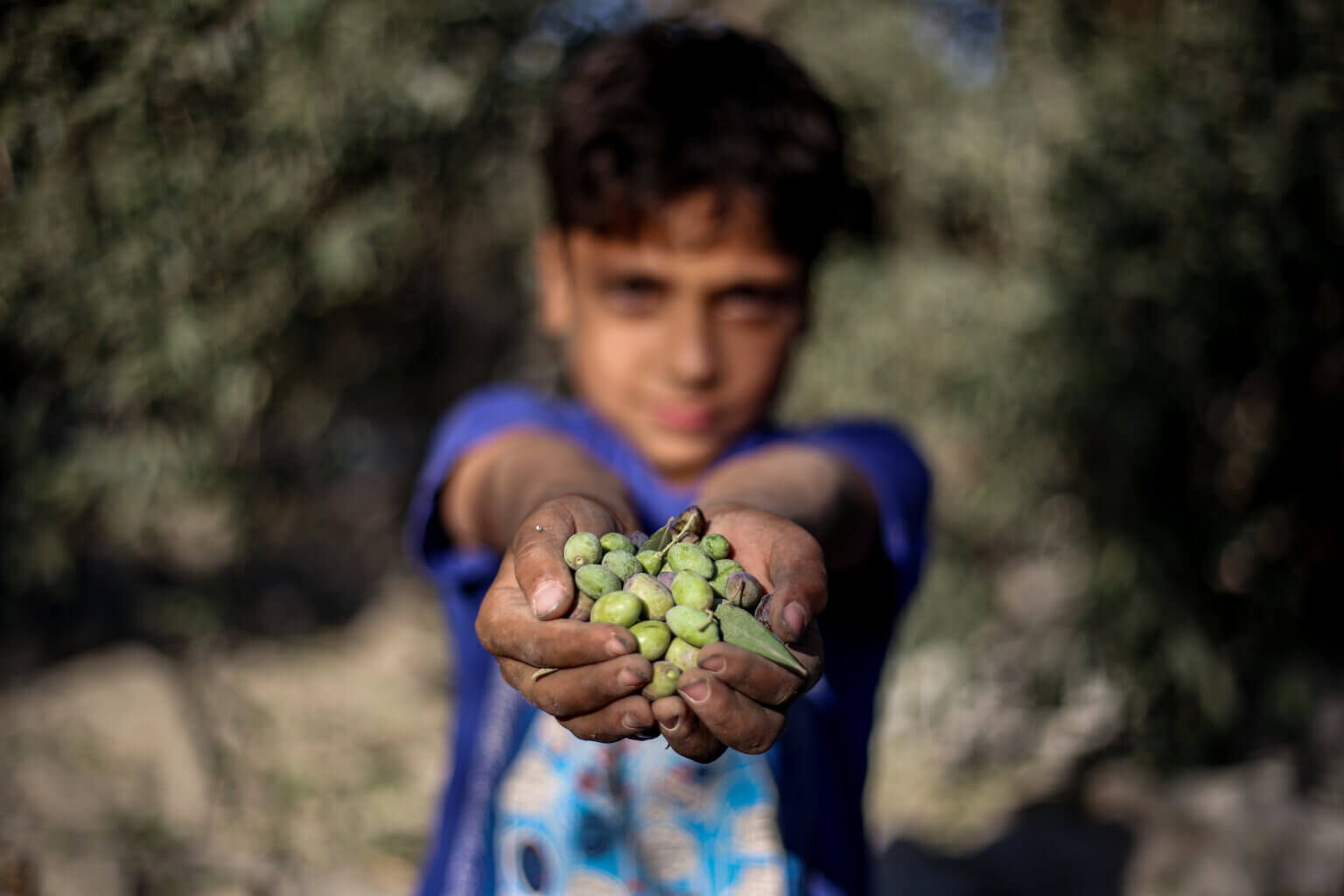 A Boy in the Shahin Family Helps His Family Pick Olives During the Olive Harvest Season in Gaza, October 2022. (Photo: Mohammed Salem)

The Shahin family sits happily in a circle in their home, located in the Shuja’iyya neighborhood east of Gaza City. The house is warm and lively, and the smell of the meal inside the oven fills the whole room. Everyone can barely contain their excitement at tasting the season’s new olive oil. On the menu is musakhan, a traditional Palestinian dish utilizing the freshly harvested olive oil to make a layered dish of taboon bread, onions cooked in copious olive oil and sumac, and often topped with chicken.

Widely regarded as the most blessed time of the year, Palestinian families in Gaza wait all year for the olive harvest season. Starting in October, families prepare harvest tools, mats, plastic rolls, high ladders, and pails, venturing out in the early morning to visit their lands, finally able to pick the olives after an entire year tending to the trees.

Everyone in the Shahin family participates in the harvest, considered the most important season of the year. They spend weeks on end together, enjoying the olives, and the resulting fresh and thick green oil, as an accompaniment to their meals. “When I dip the first piece of bread into the oil we made, I feel all the effort we put into harvesting melting away,” Amr Shahin, 13, says from his family farm.

He is part of a group of teenagers participating in the harvest. As they continue to pick up olives from the ground, Hassan, 12, points his finger to his cousin Mahmoud, a year older.

“Take Mahmoud for instance,” says Hassan. “If he doesn’t have olive oil for a week, he will die!” They all snicker, coming down from their ladders to participate in the interview.

The olives go through a short process to be ready for consumption, either as pickled olives or as fresh-pressed oil. The family all joins together under the tree to carry out a designated task within the division of labor necessary for olive picking.

Picking as a family tradition

The Shahin family owns eleven acres of land, home to three hundred olive trees. They work daily, from afternoon to sunset, taking advantage of the presence of the young boys after they get off from school to climb up the tall ladders and pick the olives from the top of the trees.

Their mothers wait for them to get back from school. They have their lunch at home quickly, then get to work. Mothers sit under the tree while the boys are up on the ladders, picking the olives and letting them fall down amid their mothers and sisters, who pick it up and separate the olives, dividing the green and black olives into separate bags. After harvesting, the olives are taken home in plastic bags. The family sells a few bags to their neighbors when they get back home.

The fastest way to prepare the olives for eating is to smash them with the flat side of a rock, without breaking the pits. Then the olives are mixed with salt and red pepper, and stored in containers for a week. After the curing period, the olives are ready.

And when the family judges the quantity it harvests to be enough, they send it over for pressing.

Extracting the oil from the olives is a long process, entailing taking the olives through several stages in the ancient olive press factories in the Gaza Strip.

Located among the farms east of al-Shuja’iyya, the Kishko Olive Press receives hundreds of people, who bring olives from their land in plump bags.

“This year the olive harvest is good, and when trees hold an extra amount of olives, the oil extracted becomes less than usual,” Salah Kishko, the owner of the press, tells Mondoweiss.

According to Kishko, this year a gallon of olive oil — containing sixteen liters — would require over 150 kg worth of olives. During the previous season, it would only require 120 kg. The amount varies each year, says Kishko, depending on the season’s prevailing climate. The amount of olives that his press goes through daily numbers over three hundred tons, which explains the good season.

The first step of this process is dumping the olives into a steam machine, in which the olives are moved through a tiny steel conveyor belt to be cleaned as the steam drags the tree leaves and other impurities.

The olives are cleaned and washed by water, and then transferred to another machine for mashing. The olives then are pressed, turning the olive into wet mush.

This renders the green olives soft and ready for oil extraction. At the end of the machine, two young boys received the olive paste mixed with the pits on a canvas, who transfer it to the pressure machine.

Dozens of burlap sacks loaded with the smashed olives are lined up between the jaws of the press. The pressing continues for over an hour, during which time the pure oil leaks into a metal basin and then into a filter tube. When the pressing ends, the cores remain inside the ceramic circles, while the pure oil goes to purification.

In the last stage of this process, the pressed oil is fed into the purification machine, splitting the unclear oil into a long pipe, while the clear oil is refined by water. The pipe carrying the oil has two faucets, one for impurities, and the other for the clear olive oil.

At this stage, people fill the fresh oil into gallon containers and take them home, to distribute among their family members or take to market to sell.

The oil is now ready, not only for consumption in the typical seasonal meals, but also for daily use, like in manakish za’atar pastries, musakhan, or just on the side, dipped with bread.

From farm to table

The olives and the olive oil are essential components of any Palestinian table. Palestinians in Gaza believe that as long as a family has olive oil at home, they will never go hungry.

Another important part of the season, especially for those who buy oil on the market, is the search for the best olive oil. If you have a neighbor who owns land with olive trees, you would usually ask them to keep you a tank — usually enough to last a family for a year.

And as the new oil flows in, people start to find ways to use up the leftover oil for last year. Weeks before the harvest season, most families start to use up their stores, using the old oil in several cooked meals.

The rest of the family helps out, preparing one of the best breakfasts you can have — zaatar manakeesh with fresh olive oil. The smaller children are already seated, anxiously anticipating the food.

The wild thyme and oil mixture is spread across the flattened dough, which is then placed in the oven for fifteen minutes, until it comes out bubbling and green.

“Oil, olives, and thyme have been produced by this land for thousands of years,” says Samera. “Palestinians understood their land and used its bounties for their survival.”

And they continue to use it to this day.

Nidaa, Samera’s daughter, is 28 years old and has a family of her own. She happily prepares Friday lunch for them, which usually includes chicken or meat. With the olive season, most families tend to make Musakhan, which as a dish makes heavy use of olive oil.

Nidaa’s family gathers ahead of lunch, while she prepares the meal.

Musakhan, perhaps the quintessential Palestinian dish, consists mainly of chicken, onions, and Taboon bread. A kind of rough flatbread, the “taboon” loaf is derived from the traditional oven of the same name, when the dough is laid over hot rocks inside the taboon, leading to the flatbread’s characteristic dimples and uneven pockets — ideal for catching and soaking up the season’s olive oil.

After the bread is made, Nidaa chops up a hefty amount of onions, and mixes them with a large quantity of olive oil and sumac. Marinated chicken bakes in the oven, with the oil and onions underneath it, catching the chicken juices that mix with the copious amounts of oil.

Once the chicken is cooked and the oil-and-onion mixture underneath is tender, it’s time for assembly.

The taboon bread is covered — in fact, soaked — with the onion, sumac, and olive oil. Once they’re all assembled, the flatbreads are layered on top of each other, and then finally topped with the roasted chicken. When they pick up the bread, it is dripping in oil.

After a heavy lunch, dinner is comparatively light, but no less replete with the season’s olive oil. Nidaa’s family gets ready for dinner at a leisurely pace, cutting vegetables for a light salad — fattoush.

It is a favorite meal for the elderly in Palestine, as it is soft and smooth. Small diced pieces of crisped bread are added to oven-roasted eggplants, fresh tomatoes, onions, cucumbers, and green pepper, seasoned with salt and dressed generously in olive oil.

This meal can be head for breakfast or dinner, and is served alongside the prepared olives.

The Palestinian relationship with olive trees has been millenia in the making. Palestinians in Gaza consider the olive as their symbol and their most prized property.

Reflecting on how vital olive trees are for Palestinian survival, Amr Shahin said: “When we feel hungry, we eat the olive. When we get tired, we rest in the shade under the trees. And when we are cold in winter, we use the wood for warmth.”

Tareq S. Hajjaj
Tareq S. Hajjaj is the Mondoweiss Gaza Correspondent, and a member of Palestinian Writers Union. He studied English Literature at Al-Azhar university in Gaza. He started his career in journalism in 2015 working as news writer/translator at the local newspaper Donia al-Watan. He has reported for Elbadi, Middle East Eye, and Al Monitor. Follow him on Twitter at @Tareqshajjaj.