As the UN’s day of solidarity with Palestinians nears, Gazans have restored a hesitant bustle 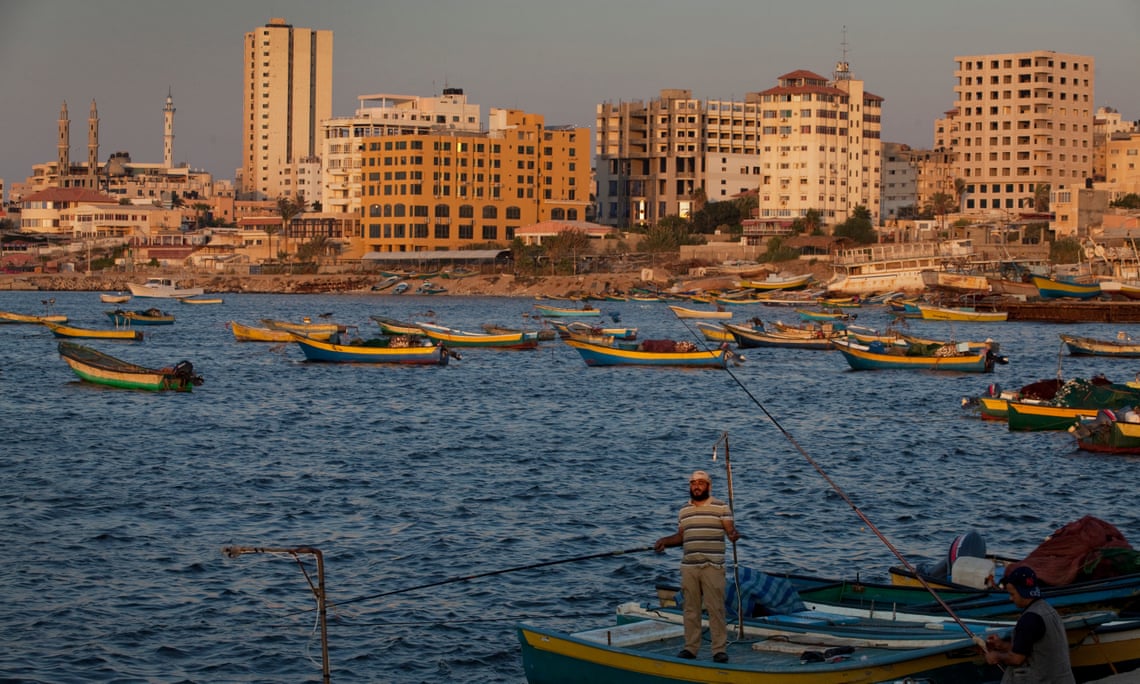 Fishermen off the coast of Gaza City, which is home to a 5,000-year-old port. (David Levene, The Guardian)

Today Medinat Ghazzah, or Gaza City, is running on empty – and yet still going. Gaza City, the Gaza Strip’s principal urban centre, carries various scars of war. Since 2006, Gaza has endured one civil war between Palestinians, three wars between the ruling Hamas militant group and Israel, a decade of Hamas’ repressive rule, and a crushing blockade by neighbouring Israel and Egypt – all of which have crippled the economy and turned the tiny territory into a site of humanitarian crisis.

Gaza City’s dusty buildings and bumpy roads, many still damaged or half-rebuilt from the last war, are at times reminiscent of facades found in Egypt and the Palestinian West Bank. But it is the crushing monotony and suffocating limits of life that define the city for residents who have walked the same streets for a decade without a chance of getting out. Still, the city carries on, with coffee shops, traffic, clothes stores, restaurants and even a new upscale mall offering diversions for those who can afford them. 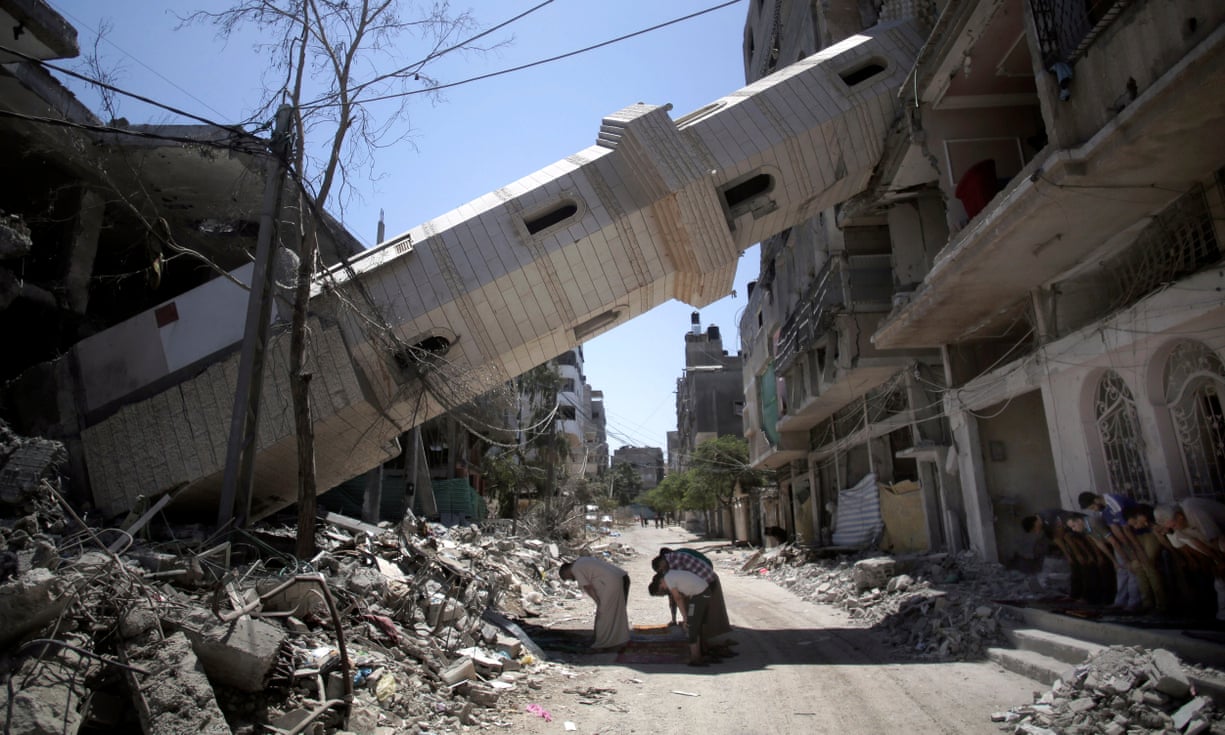 Palestinians attend Friday noon prayer beneath the fallen minaret during the 2014 war.

The city’s framework, like the rest of Gaza, is innately tied up with politics. Gaza was once part of Britain’s Mandate Palestine. Then came Egyptian occupation in 1948, followed by Israeli in 1967. Now, for the last decade, Hamas, which the European Union has designated as terrorist group, has ruled the tiny territory while Israel controls most borders.

This month – on 29 November – brings the United Nations international day of solidarity with Palestinians. Gazans, however, don’t see much of the international community these days. That’s in part because Israel strictly limits entry to the Gaza Strip, with mainly journalists (Israelis and Palestinians excluded) and aid and development workers allowed through. Even then, UN bodies and NGOs working in Gaza constrain much of the movement of their foreign staff due to security protocols. Along Gaza City’s highly polluted coast are two expensive hotels that are considered the “safe zone” where aid workers and many journalists stay. 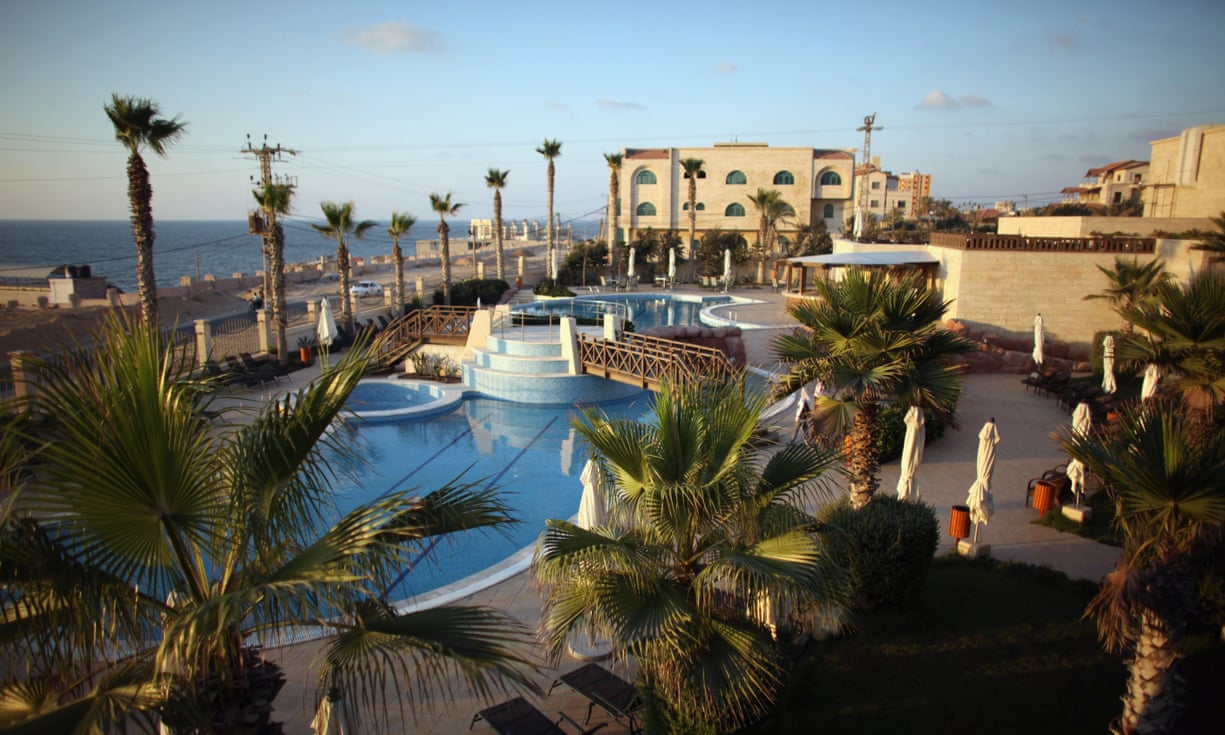 Facing an ineffective and corrupt government, the UN and NGOs have stepped in. Gazans are grateful – but know they can do better and mistrust the politics that dictates where funds are directed. Around much of Gaza are signs thanking Egypt, Qatar, Saudi Arabia, and United Arab Emirates for funding reconstruction projects. But the Arab countries have pledged far more for reconstruction than they’ve actually delivered, while many Gazans feel acutely abandoned by the Arab states and international community, and know new buildings still go first to those with Hamas connections.

40 – rank of Gaza city in 2014 list of most densely populated cities worldwide. At the time, the population of Gaza City and surrounding area was estimated at 750,000.

360 – square kilometers covered by the Gaza Strip, about the size of Detroit.

80 – percentage of families in Gaza who receive some sort of aid.

3 – number of hours of electricity generated by Gaza’s only working electricity plant at a severe low point this summer. For the last few years Gaza has averaged around at most eight hours a day of electricity.

Gaza City, famed for its port, is more than 5,000 years old. Over centuries various empires between the Nile River and Middle East – Philistines, Egyptians, Assyrians, Persians, Alexander the Great, Romans, Byzantines, Moguls, Ottomans, among others – ruled Gaza, as Jean-Pierre Filiu documents in Gaza: A History. Gaza’s status as a key trading and transit place shaped its unique culinary traditions, melding flavours like hot pepper and dill. Today Gazan culture and society has expanded to incorporate the Palestinian refugees who fled to here during the 1948 Arab-Israeli war. 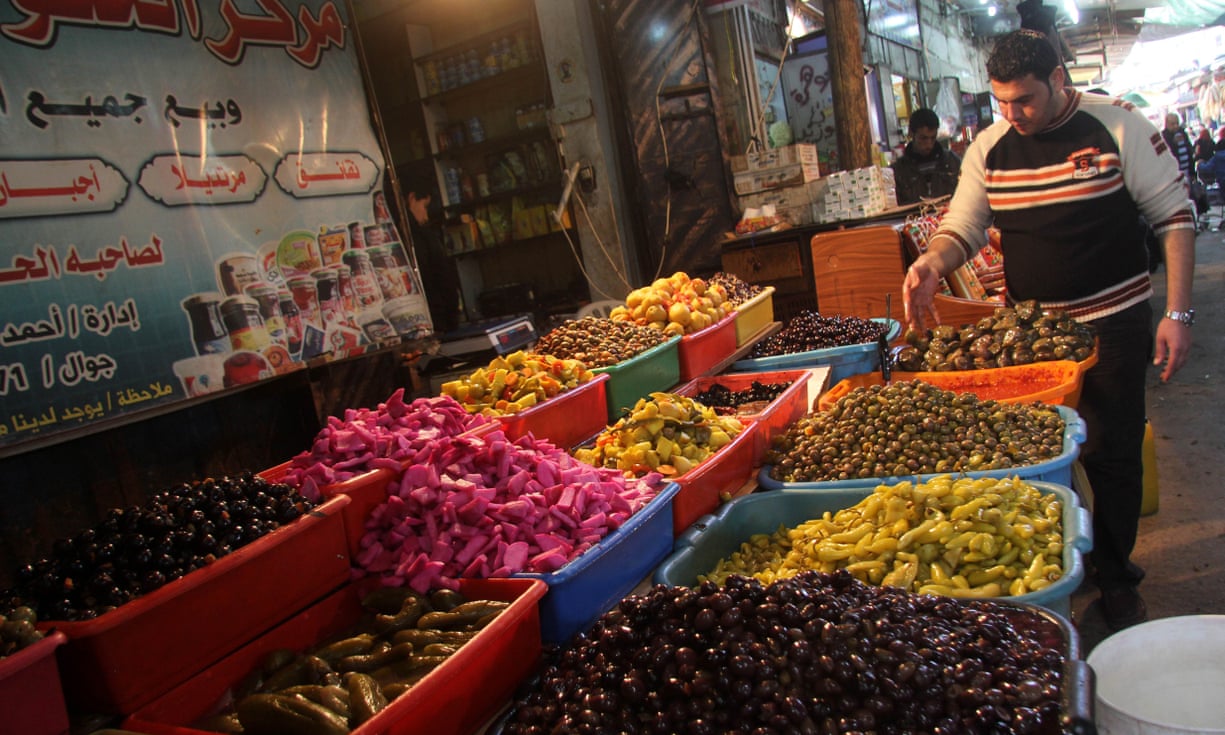 City in sound and vision

Each of Gaza City’s 10 neighbourhoods have their own rhythm and reputation. There’s the Remal neighbourhood, the city’s nicest, where many of the fancy shops and NGOs are based. Along the main drag, Omar Mukhtar Street, cars honk and shouting street vendors sell all kinds of wares. Along the way are various historical landmarks: the Square of Unknown Soldiers, Gaza’s largest open space, filled with music and light-up cars for kids to ride at night; Saraya Square, an old prison where political rallies are now held; cinemas that have been closed by Hamas; and the city’s public park, teeming with children. Keep going and there’s the old city, with the traditional Al-Zawiya market, one of the oldest in the Gaza Strip and filled with everything from spices to shoe shiners, and the Great Mosque of Gaza, the largest and oldest in Gaza and originally a Byzantine-era church. To Gaza City’s east is the Shejayia neighbourhood, a dense network of cement houses and narrow side streets that was heavily bombed during the 2014 war, and has the reputation as housing its toughest people. On Gaza City’s Mediterranean side is Al-Shati, known as the beach refugee camp. Here the sounds and rhythm of the sea mix with the honking of horns and occasional wafts of sewage as Gaza City brings the sweet and sour all at once.

How liveable is Gaza City?

For many residents, to remain living in Gaza is a point of national pride. But after a decade of war, siege, and Hamas rule, just about everyone wants out – even if only temporarily. The generation born since the siege have mostly never left Gaza; the older generation have memories of what came before, when Israelis came to the city’s markets and Gazans worked in restaurants and construction in Ashkelon and Tel Aviv. Now unemployment in Gaza is among the highest in the world, electricity and clean running water are in dire shortage, and the young generation is well educated with no place to go.

Most people get around by foot, shared taxi or car – the former growing more common towards the end of the month, as salaries are stretched thin. The city has no formal public transport. Instead, regular cars roam around looking for riders heading in the same direction, each ride costing the customer one or two shekels (about the price of a falafel sandwich) depending on the distance – and the driver’s mood. Inside the shared taxi, there are informal rules governing how males and females should interact. 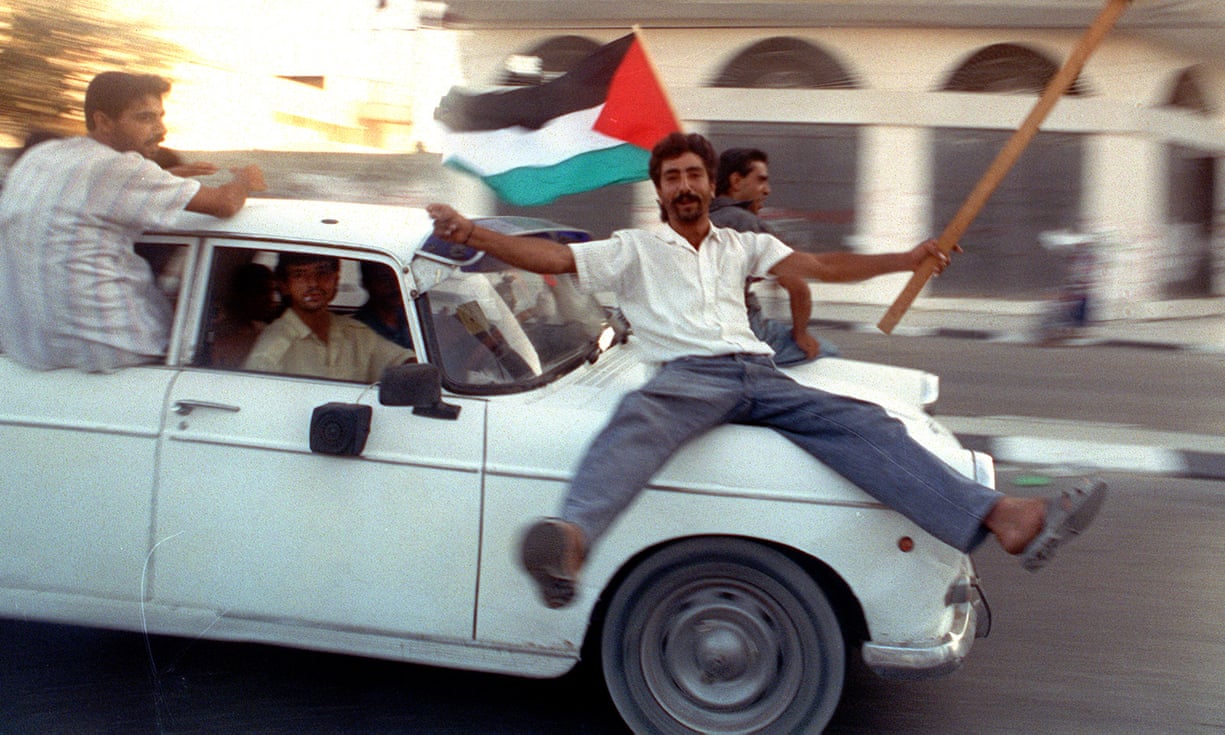 There used to be buses and microbuses serving Gaza City. Now they are mainly reserved for students to get to school or for travel between Gaza City and other areas. There are a few hubs around the city to catch cars going to the rest of Gaza. Companies sometimes provide transportation for employees, as does the government. Gas is expensive due to import restrictions (Gazans say the gas from Israel is better than Egypt’s watered-down offerings). For a more secure, albeit expensive ride there are private taxi companies.

What’s next for the city?

It has been three years since the last war between Hamas and Israel and for many in Gaza the dream of what’s next is the same as it ever was: reconstruction and employment. Huge swaths of the territory’s infrastructure, including 171,000 homes, were damaged or destroyed during the 2014 war. The city centre is now hesitantly bustling during the day , and a little brighter than other areas at night when the sun sets and electricity-starved Gaza largely goes dark. Many structures remain partially finished as people can only sporadically afford building materials.

These days, the streets convey a sense of hesitant hope tempered by fatigue. Last month, Hamas and its rival, the Fatah-dominated Palestinian Authority based in the West Bank, signed a unity deal intended to end the territorial dispute that began when Hamas evicted Fatah from Gaza in 2007. Reconciliation has eased some imports, hindered some of Hamas’ much-resented taxes and provided more work for Fatah employees in Gaza. But people in Gaza have heard these promises before and then repeatedly seen them fail. In Gaza City, the centre of economic activity, people say there’ll believe this time is different when there’s work and opportunities again. For now, it’s still the same suffocation.

Gaza may be physically and politically isolated, but many Palestinians in Gaza have turned to Instagram to get their version of their city and lives out. For slices of life you can check out some of Gaza’s most popular instagrammers such as Fatma Mosabah and Ensaf Habib , or the photojournalist Wissam Nassar.