This morning at 9:50 am, women representing 13 countries spanning five continents began their journey on Zaytouna-Oliva to the shores of Gaza, which has been under blockade since 2007. On board are a Nobel Peace Laureate, three parliamentarians, a decorated US diplomat, journalists, an Olympic athlete, and a physician. A list of the women with their background can be found here. 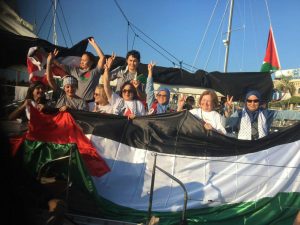 When asked why they are going, the women gave a variety of responses. Mairead Maguire, Nobel Peace Laureate from Ireland, notes that “they say that ‘silence is golden’, but regarding the plight of Palestinians in Gaza the silence of the world, especially concerning their little children, shows a lack of moral and ethical leadership from the international community. Why has it lasted so long?”

For two of the women, their countries’ own historical struggles for human rights played an important role in their decision to join the Women’s Boat to Gaza. Leigh-Ann Naidoo, an Olympic volleyball player from South Africa, feels that “South Africans understand the importance of international solidarity in fighting regimes that practice segregation.” Marama Davidson, a Maori Member of Parliament from New Zealand, carries with her a strong personal connection to Palestinian women in Gaza. “As an indigenous woman myself, I want to stand alongside the women of Gaza and to draw attention to the ongoing humanitarian crisis there.”

The Amal-Hope II has been making final preparations to sail and is scheduled to depart from Messina soon. Both boats are expected to arrive in Gaza in early October.

Yudit Ilany, an Israeli participant who has sailed with the Zaytouna-Oliva since Barcelona, said “The blockade of Gaza is a crime against humanity being committed in my name, and it is my duty to protest it in any way possible.”