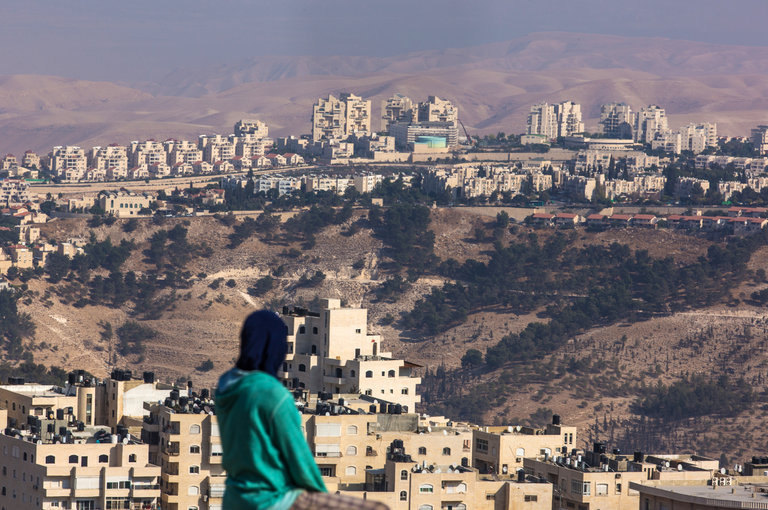 One of the largest Israeli settlements on the West Bank, Maale Adumim, rising in the distance over the Palestinian village of Zaim (Rina Castelnuovo for The New York Times)

TEL AVIV — There is agreement on very little in the fractious Holy Land, but on one issue there is near unanimity these days: A two-state resolution of the Israeli-Palestinian conflict is more distant than ever, so unimaginable that it appears little more than an illusion sustained by lazy thinking, interest in the status quo or plain exhaustion.

From Tel Aviv to Ramallah in the West Bank, from the largely Arab city of Nazareth to Jerusalem, I found virtually nobody on either side prepared to offer anything but a negative assessment of the two-state idea. Diagnoses ranged from moribund to clinically dead. Next year it will be a half-century since the Israeli occupation of the West Bank began. More than 370,000 settlers now live there, excluding in East Jerusalem, up from about 249,000 in 2005. The incorporation of all the biblical Land of Israel has advanced too far, for too long, to be reversed now.

Greater Israel is what Israelis know; the smaller Israel west of the Green Line that emerged from the 1947-49 war of independence is a fading memory. The right-wing government of Prime Minister Benjamin Netanyahu, with its contempt for Palestinians and dissenting voices in general, prefers things that way, as the steady expansion of settlements demonstrates. The Palestinian Authority in the West Bank, headed by President Mahmoud Abbas, has lost the legitimacy, the cohesion and the will to do much about it. The cancellation of municipal elections in the West Bank and Gaza that had been set for this month was another sign of paralyzing Palestinian infighting.

“Two states are not achievable in the foreseeable future,” the former Palestinian prime minister, Salam Fayyad, told me. “It has become a process about a process, and not real.”

The Obama administration has reached a point of acute exasperation. The Israeli announcement this month of a new West Bank settlement was the final straw, coming just weeks after the United States concluded a $38 billion, 10-year military aid deal. Israel’s explanation that the settlement was a “satellite” of another did not wash; its actions were viewed as egregious. Seldom has Moshe Dayan’s old dictum — “Our American friends offer us money, arms and advice. We take the money, we take the arms, and we decline the advice” — been more vividly illustrated. Yet it’s uncertain if the United States is prepared to calibrate its ironclad support in order to pressure Israel into change.

Within Israel, where Netanyahu has now amassed more than a decade in power, the political and cultural drift is toward ever more assertive and intolerant nationalism. Criticism is increasingly equated with treason. Groups like B’Tselem, which focuses on allegations of human rights violations against Palestinians in Israeli-occupied territories, are under withering attack. The Messianic religious Zionism that holds all the West Bank to be Israel’s by biblical decree is ascendant. The left is in feeble disarray.

It is sobering to note that Netanyahu probably represents the more moderate wing of his government. The most credible challenge to him may eventually come from his own spot on the political spectrum, the center-right, in the form of the telegenic Yair Lapid, who told me that Netanyahu “won’t merit even a page in Israeli history books.” Lapid believes he can conjure up some two-state magic, but he began his first political campaign in the large settlement of Ariel, and the notion that he can reverse the settler movement seems far-fetched.

I drove down to Ramallah, through a clogged checkpoint, always a startling transition from the efficient developed-world hum of Israel to the dust and haphazardness of the West Bank. On the way, I stopped to see Walid Batrawi, the director of BBC Media Action, a charity that mentors journalists and promotes an independent press. He was despondent, describing a “lack of confidence and faith in anything.” Palestinian statehood was “more distant than ever.” Abbas was distracted, he suggested, embroiled in the conflicts of his Fatah party, worried about Hamas, providing no direction. “Something has been lost,” he said. “A special feeling of patriotism, of belonging, is vanishing.”

In Ramallah, I heard similar sentiments, talk of a more individualistic Palestinian society, with less sense of community, where people were focused on taking care of themselves and doing the best they could with the current situation. Two states had become a bad joke. Young people had more faith in nonviolent resistance leading eventually to equal rights within a single state than in yet another aborted international peace initiative or aborted uprising.

Palestinians — whether in Israel proper, where the 1.5 million Arab citizens make up about 17 percent of a population of 8.5 million, or in the West Bank, where they number about 2.6 million — are tired of the humiliations, big and small, that Israel dishes out. How, they wonder, can anything resembling a state ever be fashioned from their countless little self-administering enclaves on the West Bank broken up by Israeli settlements?

In a sense, then, Israel has won. David Ben-Gurion was right when he observed in 1949 that, “When the matter is dragged out — it brings us benefits.” Policy since then has been pretty consistent: Create facts on the ground; break the Arabs’ will through force; push for as much of the biblical Land of Israel between the Mediterranean Sea and the Jordan River as possible.

If the maximalist camp was tempered, it was chiefly through the knowledge that with all the land came people, specifically millions more Palestinians, and a 50-50 state was not what the Zionist dream was about. Hence Israel’s improvised 49-year occupation — in effect dominion over Palestinians without enfranchisement of Palestinians. Hence, too, the periodic stabs at a two-state peace, most conspicuously the Oslo accords of 1993: Running the lives of subjugated others is exhausting, corrupting and inherently violent, as well as incompatible with a true democracy. 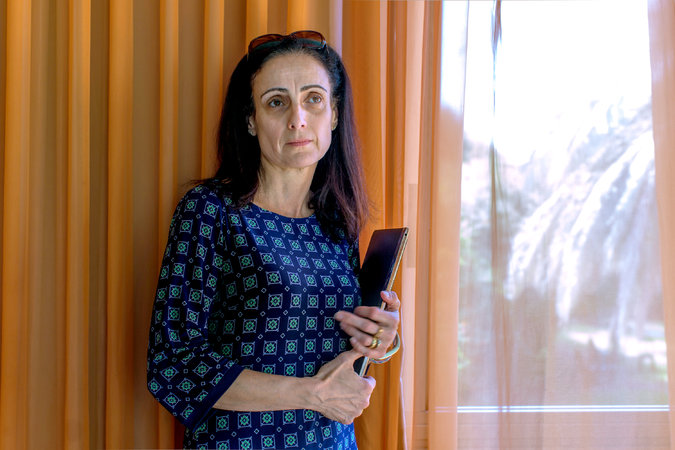 Back in Tel Aviv, I had dinner with Gil Friedlander. He’s an Israeli patriot who served in the air force for many years, before creating and selling a tech company. But his country, so dynamic on the economic front, fertile soil for start-ups, finds itself at a terrible political impasse.

“The great victorious war of 1967 had an impact that is eating us from the inside,” he told me. “I would be more than happy to get out of the West Bank and East Jerusalem and build a country with a morality I believe in. I will fight for peace, but I will not fight to maintain the status quo.” He described feeling more and more confined, living in “smaller and smaller areas where I find people who think like me,” and feeling a stranger in the Jerusalem where he grew up.

I have long been a strong advocate of a two-state outcome myself. But there is no point beating a dead horse. It is time for incremental steps instead. Israel could find lots of ways to ease humiliations and economic hardship for Palestinians in Gaza and the West Bank, without compromising its security. It could take down some roadblocks, curtail the formalities for movement in and out of Gaza, and grant more building permits in the West Bank, as it just has in quietly authorizing some Palestinian development plans in West Bank areas under exclusive Israeli control. It could even, without saying so, stop settlement expansion.

The worst thing would be for Western leaders to come up with some new “peace initiative” that would offer a convenient diversion from political responsibility. Netanyahu will one day have to tell Israelis if he wants a big binational state or a smaller Jewish-majority state side by side with a Palestinian state. He is trying his best to avoid making the choice, keeping millions of Palestinians in limbo; the West helps him with a “peace process” that goes nowhere. Abbas also owes his people clarity and accountability — as well as a political destination. He is marking time.

After the election but before he leaves office, President Obama may present America’s principles for a two-state outcome in a Security Council resolution that sets out how Israel and Palestine would look in their “final status.” Israel is strongly opposed. That is the best reason for doing it. As long as Israel has a blank check from Washington and an effective Security Council veto through the United States, nothing will change. And something has to.

Israel is now a modern society. Its per capita income is higher than Spain’s. But behind the sheen of economic success, the shadow of undefined borders and violence always lurks. I was a guest at a dinner on a penthouse terrace hosted by a former Israeli ambassador to the United States and attended by a former head of military intelligence, a tough Israeli lawyer and an Arab Israeli couple with a high-tech neuroscience business, among other luminaries. Tensions rose.

Reem Younis, one of the Arab entrepreneurs, was saying that the father of her husband, Imad, in his will had identified property lost to Israel in 1948 that his sons might try to recover, whereupon an Israeli woman, alluding to property her family had lost in Austria in the Holocaust, said, “You have to move forward, you cannot go back.” Whereupon the lawyer pressed the Younises, demanding to know if they saw themselves as Israelis, or Palestinians, or Muslims, or Arabs, or what.

“You cannot force me to choose!” Imad Younis exclaimed. “I’m an Israeli. I’m a Palestinian. I’m an Arab. I’m a Christian, as it happens. I am all of these identities. I identify with the people in what amounts to an Israeli prison in Jenin or Nablus on the West Bank.”

Reem said, “I can tell you this, on the day that I say I’m an Israeli, we should all be very proud.”

A few days later, I went to see the couple at the headquarters of their company, Alpha Omega, in Nazareth. Theirs is an inspiring story — an Arab couple in Israel who sold a car and four gold coins to start a business that now employs 65 people and is a world leader in machinery and software for helping surgeons navigate the brain. Such Arab start-ups have been rare.

“How can you feel equal when you are not?” Reem said, mentioning that she had found it impossible to buy a house in a nearby town because she is an Arab. “Israel needs to be democratic more than Jewish.”

Imad believes the personal trumps the political. “One state or two states? Who cares?” he told me. “What matters is human dignity and equality under the same law. Palestinian kids want to live well. That’s what they want.”

A version of this op-ed appears in print on October 30, 2016, on page SR11 of the New York edition with the headline: Why Israel Still Refuses to Choose. Today’s Paper|Subscribe