Supporters of Israel hate it when people use the word “apartheid” to describe the country, but we don’t have another term for a political system in which one ethnic group rules over another, confining it to small islands of territory and denying it full political representation. 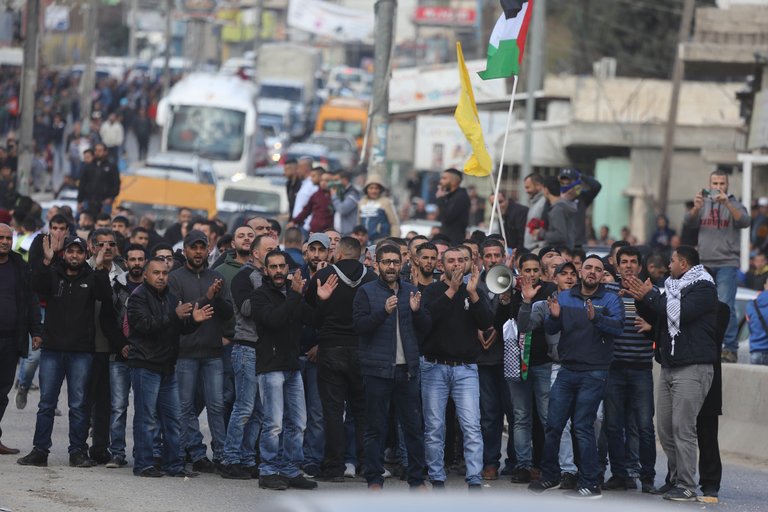 Palestinians protesting the Trump administration’s decision to recognize Jerusalem as the capital of Israel. (Issam Rimawi/Anadolu Agency, via Getty Images)

Last month, Donald Trump announced that the United States would move its embassy in Israel from Tel Aviv to Jerusalem, infuriating the Palestinians, who want East Jerusalem as the capital of a future Palestinian state. Despite what some feared, the move didn’t spark widespread unrest in Muslim countries.

While the world rejected the new policy — the United Nations General Assembly voted 128 to 9 to condemn it — Arab states seemed to tacitly accept it. As The New York Times reported last week, an Egyptian intelligence officer even called influential talk-show hosts urging them to steer their audiences away from anti-Israel outrage.

For some conservatives in the United States, the apathetic Arab response proves that Trump was right. The Daily Caller gloated about Trump’s refusal to allow “Palestinian threats of violence” to sway the United States. In National Review, Douglas Murray wrote that the “U.S. has stared down the men of violence and — for the time being at least — come out from the encounter on top.”

This argument misses the main reason to oppose the Jerusalem announcement, apart from the continued suffering of the Palestinians, which few in American politics particularly care about. Trump’s decision wasn’t disastrous because it risked causing riots but because, long-term, it endangers whatever thin chance remains of a two-state solution to the Israeli-Palestinian conflict. And the alternative to a two-state solution is one state, a greater Israel that includes the occupied territories. That state can be Jewish or it can be democratic, but it cannot be both. Trump’s embassy decision was thus another nail in the coffin of liberal Zionism.

When the administration initially announced plans to move the embassy, it claimed it was not prejudging the status of Jerusalem in a final peace deal. But Palestinians and Israelis alike understood Trump to be giving the Israeli government carte blanche to continue claiming Palestinian territory.

Not long after Trump’s announcement, the central committee of the ruling Likud Party passed a resolution calling for the de facto annexation of Israeli settlements in the West Bank. The Knesset passed an amendment requiring a supermajority to give up Israeli sovereignty over any part of Jerusalem, making a peace deal with the Palestinians even more elusive.

Mustafa Barghouti, a member of the Palestine Liberation Organization’s central council, told me that before Trump’s decision, “there was a frozen peace process,” but many people believed it could be restarted. “Mr. Trump killed the potential,” he said.

This appears to have been intentional. Writing in “Fire and Fury,” his new book about the Trump administration, Michael Wolff quotes Steve Bannon boasting about the implications of moving the embassy to Jerusalem, which Bannon treated as a death knell to Palestinian national aspirations. “We know where we’re heading on this,” Bannon reportedly said to the ousted Fox News chief executive Roger Ailes. “Let Jordan take the West Bank, let Egypt take Gaza.”

Despite Bannon’s Great Game fantasies, that’s not going to happen. Instead, if the possibility of Palestinian statehood is foreclosed, Israel will be responsible for all the territory under its control. There will be one state; the question is what sort of state it will be. Some on the Israeli right foresee a system in which most Palestinians will remain stateless indefinitely, living under a set of laws different from those governing Israeli citizens. Yoav Kish, a Likud member of Parliament, has drawn up a plan in which Palestinians in the West Bank will have limited local administrative sovereignty; rather than citizens they will be “Residents of the Autonomy.” Supporters of Israel hate it when people use the word “apartheid” to describe the country, but we don’t have another term for a political system in which one ethnic group rules over another, confining it to small islands of territory and denying it full political representation.

The word “apartheid” will become increasingly inescapable as a small but growing number of Palestinians turn from fighting for independence to demanding equal rights in the system they are living under. “If the Israelis insist now on finishing the process of killing the two-state solution, the only alternative we have as Palestinians is one fully democratic, one-state solution,” Barghouti says, in which everyone has “totally equal rights.”

Needless to say, Israel will accept no such thing. Though demographics in the region are as contested as everything else, Palestinians are likely to soon become a majority of the population in Israel and the occupied territories. If all of them were given the right to vote, Israel would cease to be a Jewish state.

But most of the world — including most of the Jewish diaspora — will have a hard time coming up with a decent justification for opposing a Palestinian campaign for equal rights. Israel’s apologists will be left mimicking the argument that William F. Buckley once made about the Jim Crow South. In 1957, he asked rhetorically whether the white South was entitled to prevail “politically and culturally, in areas in which it does not predominate numerically.” The “sobering answer,” he concluded, was yes, given the white community’s superior civilization.

It’s impossible to say how long Israel could sustain such a system. But the dream of liberal Zionism would be dead. Maybe, with the far right in power both here and there, it already is.

A version of this op-ed appears in print on January 9, 2018, on Page A23 of the New York edition with the headline: Is Liberal Zionism Dead?