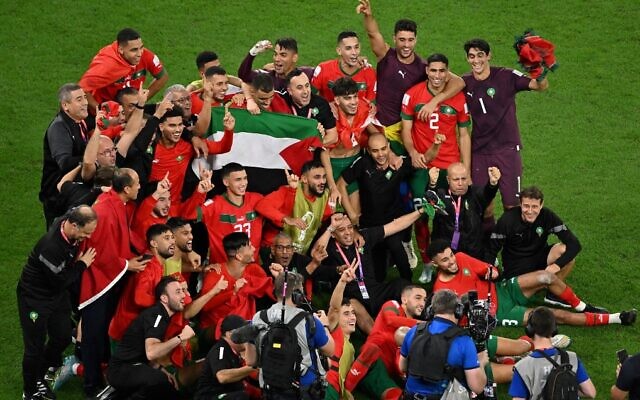 Morocco’s players celebrate with a Palestinian flag at the end of the Qatar 2022 World Cup round of 16 soccer match between Morocco and Spain at the Education City Stadium in Al-Rayyan, west of Doha on December 6, 2022. (Glyn Kirk/AFP)

Pablo Sarabia, Carlos Soler and Sergio Busquets missed their penalties for Spain, with Sarabia hitting the post and Morocco goalkeeper Yassine Bounou stopping the other two.

The teams drew 0-0 in regulation and extra time.

Morocco has been the biggest surprise of the tournament and will next face either Portugal or Switzerland.

As the Moroccan team gathered on the field to celebrate, players raised aloft a Palestinian flag alongside several Moroccan ones, the latest sign of solidarity with the Palestinians at the first World Cup held in the Middle East.

The move came despite Morocco’s increasingly close relations with Israel after signing the Abraham Accords that normalized ties.

Morocco with the Palestinian flag at every given opportunity i really love them sm 😭❤️pic.twitter.com/t3SvxObjes

FIFA regulations prohibit the display of banners, flags and fliers that are deemed to be “political, offensive and/or discriminatory nature.” In the past, soccer’s governing bodies have issued fines for displays of the Palestinian flag inside stadiums.

Morocco’s players also displayed the Palestinian flag after the team’s win against Canada during the group stage last week. 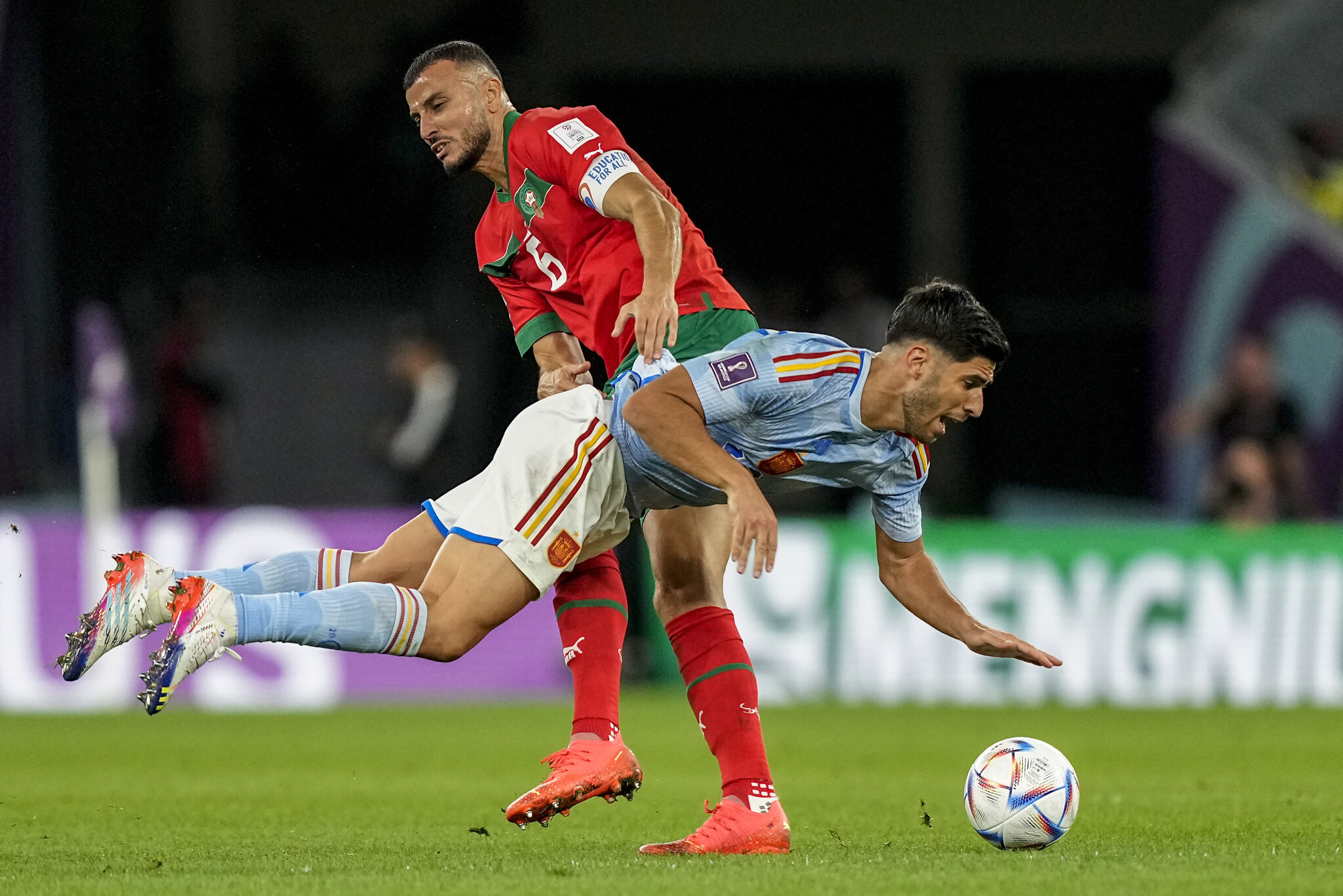 Morocco’s Romain Saiss fights for the ball with Spain’s Marco Asensio during the World Cup round of 16 soccer match between Morocco and Spain, at the Education City Stadium in Al Rayyan, Qatar, Dec. 6, 2022. (AP Photo/Martin Meissner)

Morocco is also the only team from outside Europe or South America to make it to the last eight. The team made the round of 16 once before, at the 1986 World Cup in Mexico.

Spain was eliminated by host Russia in a penalty shootout at the 2018 World Cup, and by Italy in the semifinals of last year’s European Championship.

It was the fifth straight time Spain played extra time in a knockout round of a major tournament. The team played 120 minutes against Russia and in all three of its knockout games at Euro 2020.

Moroccan fans significantly outnumbered — and were louder — than the Spaniards at Education City Stadium.

Morocco and Spain are close neighbors with a complex geopolitical relationship.