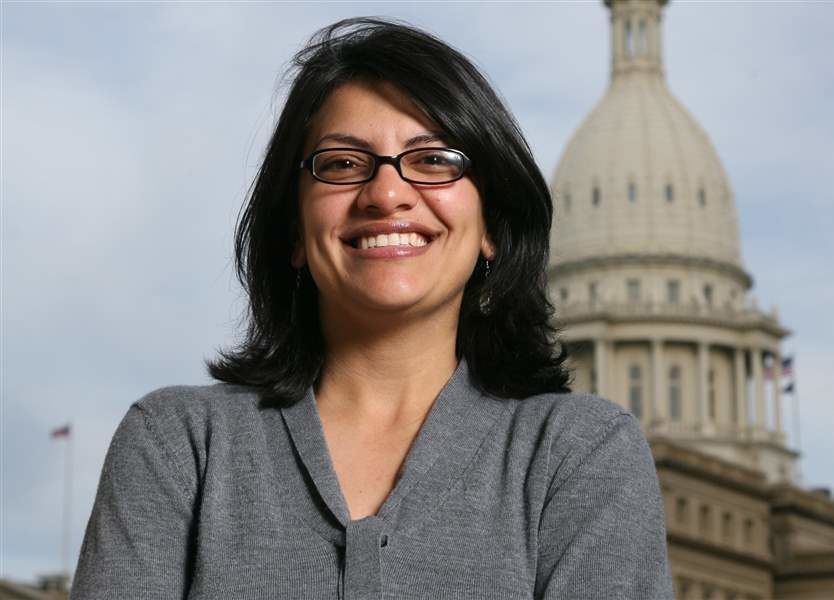 “Instead of her talking about things, she’s new here, she ought to listen and learn and open her mind and then come to some conclusions,” Engel told Al-Monitor. “If you’re going to be close-minded and have your views, no one’s going to change her views. But I would hope that once you’re elected to Congress, you would at least care to see the other side of the coin.” — www.al-monitor.com/…

Official Congressional delegations must be approved by the House speaker or the chair of a committee the Representative sits on. Though Rep. Tlaib isn’t on Rep. Engel’s committee, since he sits on Foreign Affairs, his views carry weight with others. Rep. Tlaib knows this.

Yo @RepEliotEngel, how are we ever going to obtain peace? I hope youÃ¢ÂÂll come with me on the trip to listen and learn. My sity (grandmother) will welcome you with an embrace & love. Please feel free to call me if you have anything to say. I am your colleague now.

Rep. Tlaib is showing an enormous amount of maturity here.

TAKE ACTION: If you’re a constituent, write Rep. Tlaib’s office here to let her know you support her delegation. If you’re not, write your Representative and ask that they accompany Rep. Tlaib.

There is no value in powerful US lawmakers receiving one-sided views. Yet, that is exactly what many others in Congress want.

“This is not partisan,” Babin told Al-Monitor. “My concern is the relationship between the United States and Israel. And when you have a [congressional delegation] specifically to one of the bigger threats to Israel, then I think that could pose some threat and risk as far as the American-Israeli relationship.” — www.al-monitor.com/…

Not unsurprisingly, the rights of millions of Palestinians do not figure in Babin’s statement. They simply don’t exist, except as a bogey-man “threat”. The fact that the Israeli state visits violence on Palestinians in vast amounts is ignored as well. That ignorance is exactly what Rep. Tlaib’s planned delegation seeks to remedy.

Even more outrageously, Rep. Lee Zeldin (NY-1) has proposed a resolution to condemn Rep. Tlaib and Rep. Ilhan Omar, accusing them of anti-semitism. The resolution (H. Res. 72) has 22 co-sponsors, all Republican. They claim this is similar to the resolution condemning Steve King’s white supremacy comments.

In reality, these Congressmen are fighting a losing battle. Ordinary Americans’ views on Israel/Palestine are changing. A solid majority of Democrats now believe sanctions should be imposed on Israel if settlements in the West Bank continue to expand.

while most Americans have probably never heard of the Boycott, Divestment, Sanctions (BDS) movement that Hill backs, our poll shows that a large number of Americans support imposing sanctions or more serious measures if Israeli settlements in the West Bank continue to expand: 40 percent of Americans support such measures, including a majority of Democrats (56 percent). This comes as senators, including Democrats, are proposing, despite continued ACLU opposition, to delegitimize and criminalize voluntary boycotts of Israel or settlements through the Israel Anti-Boycott Act, while not differentiating between Israeli settlements in the West Bank from those in Israel proper. — foreignpolicy.com/…

The NYT has an article up about the attacks on Rep. Tlaib and Rep. Omar that is worth a read: From Celebrated to Vilified, House’s Muslim Women Absorb Blows Over Israel

And while Democratic leaders publicly defend them, some Democratic colleagues are clearly uneasy. Representative Ted Deutch, Democrat of Florida and a founder of a bipartisan task force to combat anti-Semitism, said some of the lawmakers’ comments “fall into longstanding anti-Semitic tropes.” When Ms. Omar was named to the House Foreign Affairs Committee, its chairman, Representative Eliot Engel of New York, told her privately that he would not allow some of her “particularly hurtful” remarks to be “swept under the rug,” Mr. Engel said.