Barcelona, Spain – From September 12-14, the sailing vessels Amal-Hope and Zaytouna-Oliva will moor at Bosch i Alsina dock in the port of Barcelona where various events (concerts, talks, nonviolent workshops, a street parade and visits to the boats) will take place as farewell for the women leaving to break the blockade on Gaza. 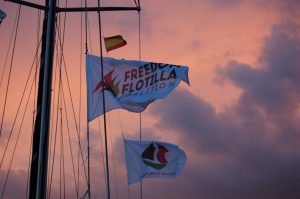 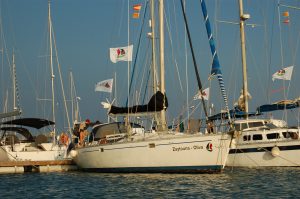 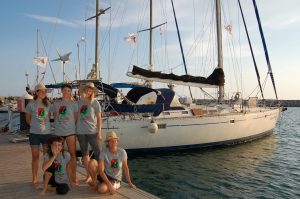 According to Laura Arau, with Rumba a Gaza, Spain’s WBG partner, the launch point from Barcelona has special meaning for the community there. “We have been a sister city with Gaza since 1998, yet we have been unable to visit with one another,” she says. “We want our sisters in Gaza to know they are not forgotten and that with these boats and women, we are sending to them our message of hope, love and solidarity.”

The boats will depart on September 14th to Ajaccio, France and then travel through another Western Mediterranean port before reaching the shores of Gaza in early October. For the Barcelona-Ajaccio leg, the passenger lists include Malin Björk, a Member of European Parliament from Sweden; Zohar Chamberlain Regev, an Israeli who currently lives in Spain and Ann Wright, a retired U.S. Army Colonel and former U.S. diplomat who resigned in 2003 in opposition to the invasion of Iraq. The women participants, who differ for each leg of the journey, represent over 15 countries across six continents. However, as Chamberlain Regev, who chairs WBG’s steering committee, explains “While we come from very different cultural and professional backgrounds, we all share a common bond. We find the blockade of Gaza and the occupation of Palestine absolutely unacceptable. And as long as governments continue to ignore this political-humanitarian crisis, we, as global citizens of goodwill, have no choice but to continue our efforts to break this inhumane blockade.”

For a schedule of program activities Barcelona, visit here.

The Women’s Boat to Gaza is an initiative of the Freedom Flotilla Coalition composed of civil society organizations and campaigns from more than a dozen countries. For more information, visit www.womensboattogaza.org.