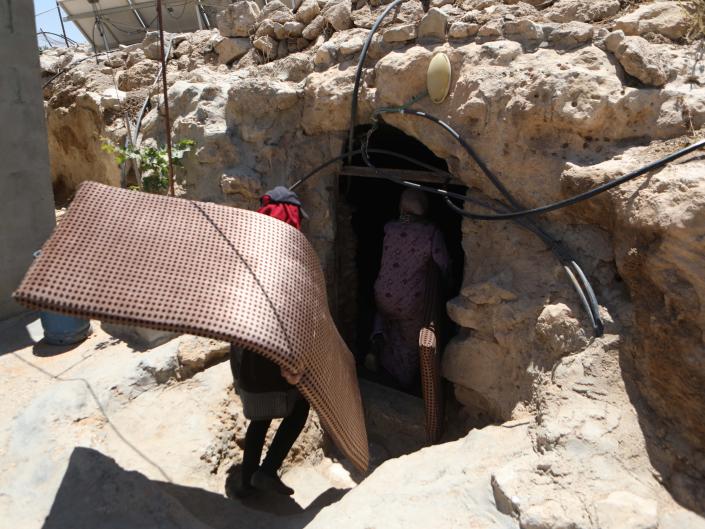 Members of Palestinian Masafer Yatta communities determined to remain on their land despite Israeli forced evictions, south of Hebron in the West Bank, May 7, 2022. (Mamoun Wazwaz-Anadolu Agency via Getty Images)

In an effort to resist their forced eviction by Israeli authorities — which the United Nations has said may be a war crime — some Palestinians are living in caves to remain in their homeland.

The semi-nomadic people of the Masafer Yatta region have, for generations, lived in small homes and caves along the hillside as they migrated livestock across the area. The desert region, located at the southern tip of the occupied West Bank, is home to 33 villages where some residents, now facing the destruction of their homes by Israeli forces, have moved their families into the old caves to resist being displaced.

The caves are dusty and hot, The Guardian reported, with stone walls and improvised lighting attached to generators. Though their ancestors once used the caves willingly, residents now feel stuck, facing full Israeli control and the demolition of their existing homes.

“In these days we are jailed in our caves, we cannot move,” Indian news outlet EastMojo reported Hajja Halima Abu Younis, an 82-year-old woman from the Jinba village, said. “We are afraid the Israeli army will kill someone while they are conducting military training. The army trains tanks around our village. The sound of the bombs and shots scare the children and the flocks of animals. My son Issa cannot graze his 150 sheep during the military training. How can a shepherd be a shepherd if he cannot graze his sheep?”

In May, Israel’s Supreme Court approved the removal of the people of the Masafer Yatta villages, home to approximately 1,200 residents, in order to allow the country’s Army to use the land for a live-fire military training ground. The landmark decision was one of the largest removal rulings made by the court since Israeli occupation of the Palestinian territories began in 1967.

“About 1,200 people, including 580 children, are now at imminent risk of forced eviction and displacement,” read a United Nations statement released shortly after the decision. “They stand to lose their homes, belongings, access to water, livelihoods, primary health facilities and schools. This could amount to forcible transfer, a grave breach of international humanitarian law and, thus a war crime.”