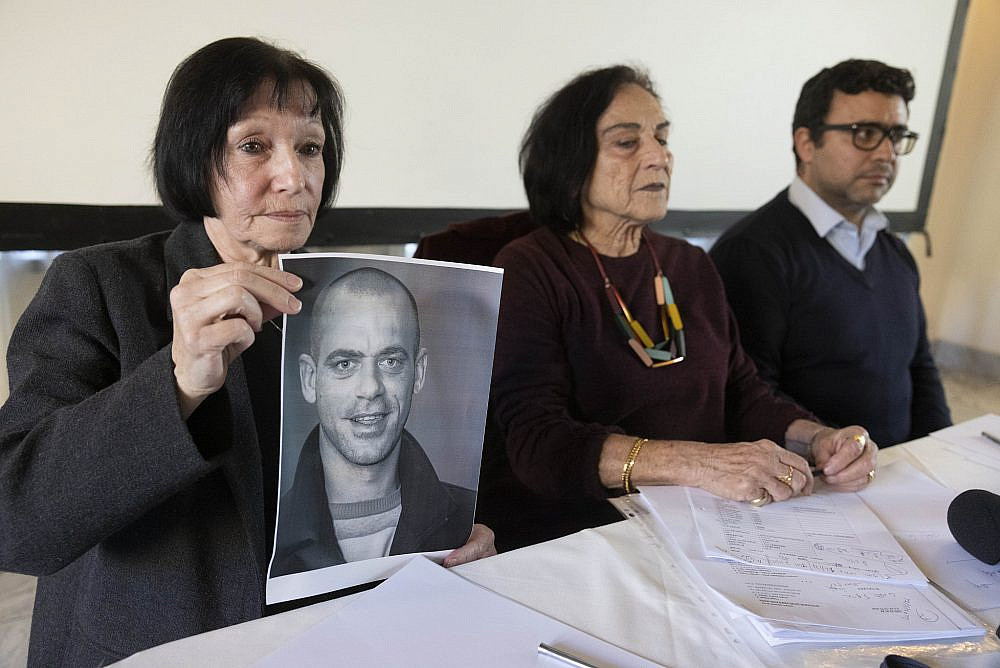 Salah Hammouri’s mother (left), alongside Attorney Leah Tsemel (center) and Munir Nuseibeh (right), holds up a photo of him at an emergency press conference in Jerusalem, December 2, 2022. (Oren Ziv)

Israel announced last week that it has revoked the Jerusalem residency of Palestinian human rights lawyer Salah Hammouri and intends to deport him to France. Hammouri, who has been held in administrative detention without charge or trial since March, was informed that the appeals he filed to the District Court and Supreme Court in the past year have been rejected, leading outgoing Interior Minister Ayelet Shaked to order his deportation.

The 36-year-old lawyer was born in Jerusalem to a French mother and a Palestinian father, and has French citizenship. He works at the prisoners’ rights NGO Addameer, one of the six Palestinian civil society groups declared “terrorist organizations” by Israeli Defense Minister Benny Gantz in October 2021), based on unsubstantiated allegations of ties to the Popular Front for the Liberation of Palestine (PFLP) that failed to convince European governments. Hammouri is also one of six Palestinian human rights activists whose phones were hacked with NSO Group’s Pegasus spyware, according to an investigation by Amnesty International and Citizen Lab last year.

In October 2021, Shaked ordered to revoke Hammouri’s Jerusalem residency on the grounds of “breach of allegiance” to the state, on the basis of confidential material supposedly proving that he is a PFLP activist. His lawyers denied the charges. About five months ago, the Supreme Court ruled that a renewed status revocation process needed to be conducted in his case, which was completed at the end of November. Meanwhile, Hammouri’s administrative detention ended on Sunday, and he has been transferred to the custody of the Immigration Authority. (Update: On December 7, Hammouri’s legal team announced that the deportation has been successfully delayed until at least January 1, pending further legal challenges.)

When Israel annexed East Jerusalem after occupying the territory in 1967 — in a move not recognized by the international community — it gave the Palestinians living there “permanent residency” permits rather than full citizenship (Palestinian Jerusalemites can apply for citizenship, but face many economic and bureaucratic barriers in the process; the vast majority refuse to apply in opposition to the state’s illegal annexation). The state can revoke these permits for several reasons, including if someone moves their so-called “center of life” away from Jerusalem. Around 15,000 Palestinians have had their Jerusalem residency revoked since 1967. 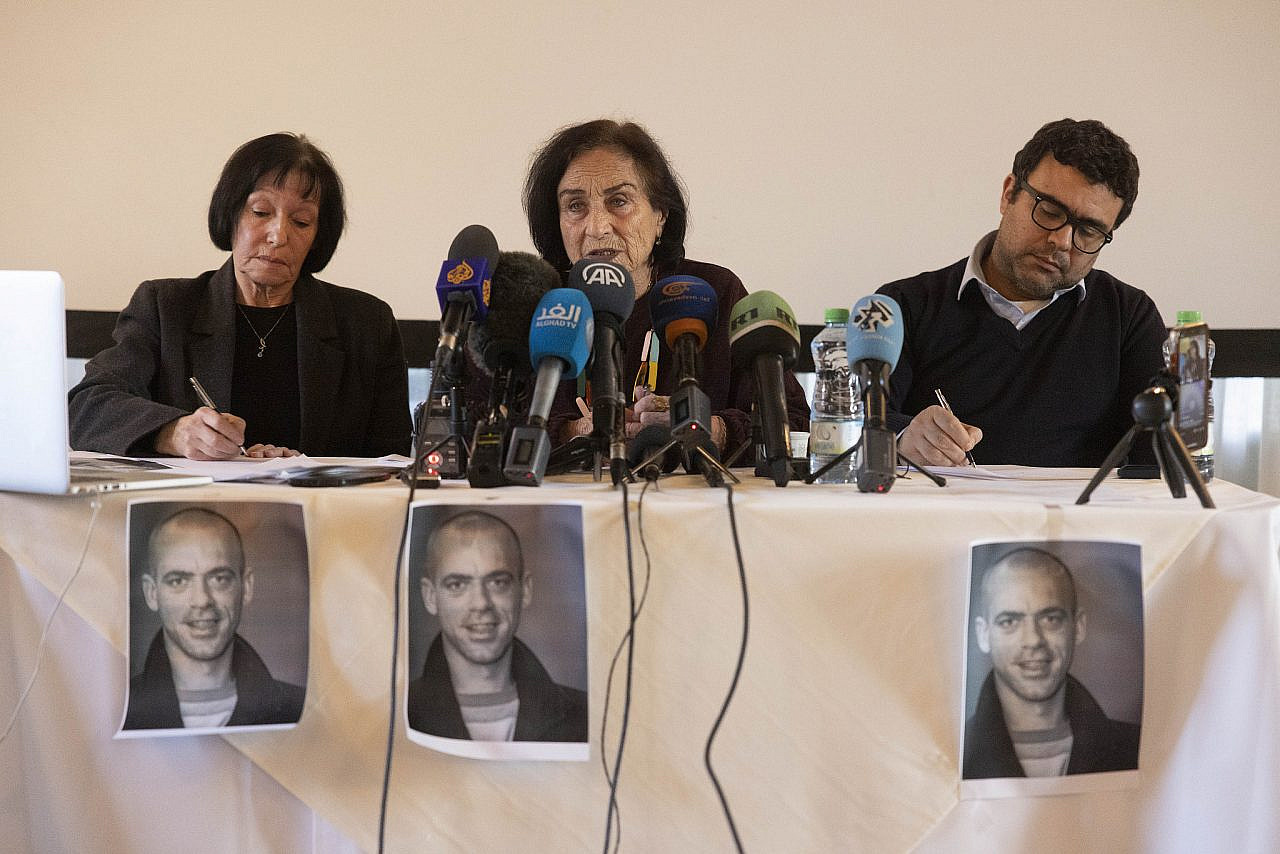 The revocation of Hammouri’s residency was made possible by an amendment to the Entry into Israel Law in 2018, under then-Interior Minister Aryeh Deri, authorizing the minister to deprive permanent residents of their status for committing “an act that constitutes a breach of allegiance to the State of Israel.” Shaked, who ordered Hammouri’s revocation, did not specify which actions constituted a “breach of allegiance,” nor did she reveal evidence on which the allegation was based. It should be noted that international law prohibits an occupying power from forcing the subjects under occupation to swear allegiance to it.

The state claims that it has new information about Hammouri regarding “terrorist activity,” His lawyers, however, believe that he is mainly being deported because of his past conviction for involvement in a plan to murder Rabbi Ovadia Yosef, the longtime spiritual leader of the Sephardic Orthodox party Shas, during the Second Intifada. In 2005, Hammouri was sentenced to seven years in prison after accepting a plea bargain, before being released in 2011 as part of the Gilad Shalit prisoner exchange deal with Hamas in Gaza.

Since then, Hammouri has repeatedly been placed under administrative detention, including for 13 consecutive months during 2017-2018. Because of the residency revocation last year, Hammouri’s latest administrative detention procedure was conducted according to military law, as is customary for Palestinians who live in the occupied West Bank without Israeli residency status. In 2016, Israel prevented Hammouri’s wife, a French citizen, and his children from entering the country, and deported them back to France from Ben Gurion Airport; the family has been geographically divided ever since.

Interior Minister Shaked claimed in a statement that “from a young age Hammouri promoted terrorist acts and took advantage of being a resident of Israel for these acts,” including “conspiracy to carry out an attack on Rabbi Ovadia Yosef.” Attorney Danny Shenhar from the NGO HaMoked, who represents Hammouri together with Attorney Leah Tsemel, told +972 that Israel’s attempt to deport him is “a double punishment and retroactive application of the law.”

“This is the first case I know of where a resident of East Jerusalem faces forced deportation to another country,” said Shenhar. “As a member of the indigenous population of Jerusalem, Hammouri owes no allegiance to the State of Israel,” he added. “The fact that this decision was made largely on the basis of secret evidence only exacerbates the injustice.”

Last Friday, an emergency press conference was held in East Jerusalem in an attempt to prevent his deportation, attended by his parents, Attorney Tsemel, and Munir Nuseibeh, an expert in international law from Al-Quds University, who emphasized at the event that Hammouri’s deportation would constitute a war crime. The fear, according to the speakers, is that the attempt to deport Hammouri will be used by Israel as a test case to later deport more Palestinians who hold additional citizenships on grounds of “disloyalty.” 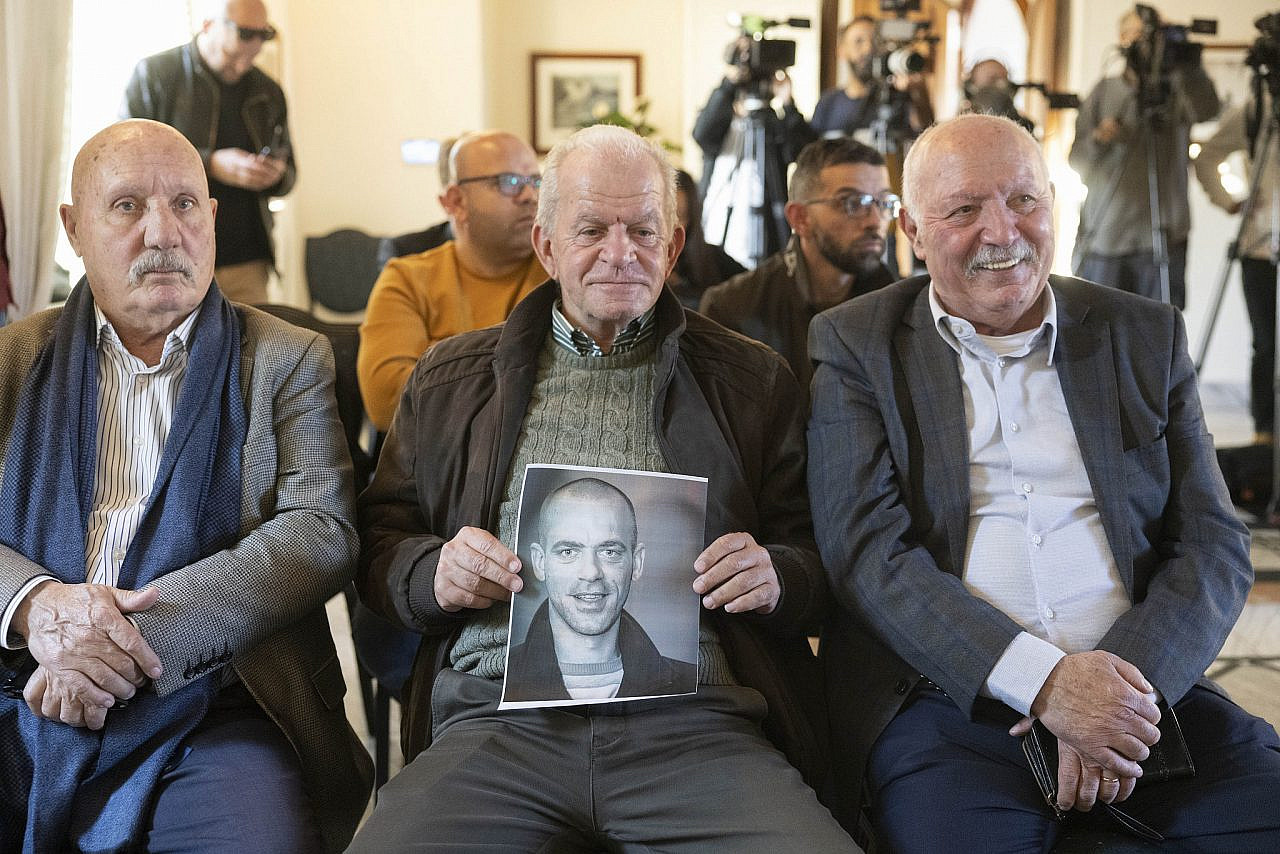 The father of Salah Hammouri holds a photo of him at an emergency press conference in Jerusalem, December 2, 2022. (Oren Ziv)

“Hammouri’s case is important because it is critical for the future of [Palestinian] Jerusalemites,” said Attorney Tsemel. “Soon it will be 30 years since the great deportation of Hamas and Islamic Jihad to Lebanon [415 Palestinians in the occupied territories were expelled in December 1992]. This was the last mass deportation. Salah’s case affects all Jerusalemites, who are not citizens, who did not ask for status from Israel but received it, and the interior minister and justice ministry claim that they have to show absolute loyalty to the state.”

Salah’s mother, Denise Hammouri Guidoux, said during the conference: “We were waiting for his release [from detention] at the end of the week, but we heard that he would be deported — it was a shock. We knew about this possibility, but we didn’t think it’s possible to send someone from his homeland. He is French with citizenship, but he is more Palestinian. He was born in Jerusalem, lived here, studied here, [and] has roots here.”

Since the announcement that Israel intends to deport him, several human rights organizations, including Human Rights Watch and Amnesty, have called on the French government and President Macron to prevent the move. A campaign against his deportation has also gained momentum online under the hashtag #JusticeforSalah. The UN Special Rapporteurs on the occupied territories and on counter-terrorism have also called on France and the international community to take concrete actions to stop the expulsion.

In response to +972’s question at the press conference, Attorney Tsemel said that she cannot predict how Hammouri will react when they try to put him on a flight, but noted that international law forbids transferring a person to another country against their will. “I hope we don’t get there,” she added.

The French Foreign Ministry stated: “France is following Salah Hammouri’s situation very closely and at the highest level… [he] must be able to have a normal life in Jerusalem, where he was born and where he lives, and his wife and children must be able to travel there to find him.”

The New Ecological and Social People’s Union (NUPES), an alliance of left-wing parties in the French parliament, said in a statement: “France cannot allow the most basic rights of one of our compatriots to be violated… It is high time that France raises its tone against Israel; its credibility depends on it.”