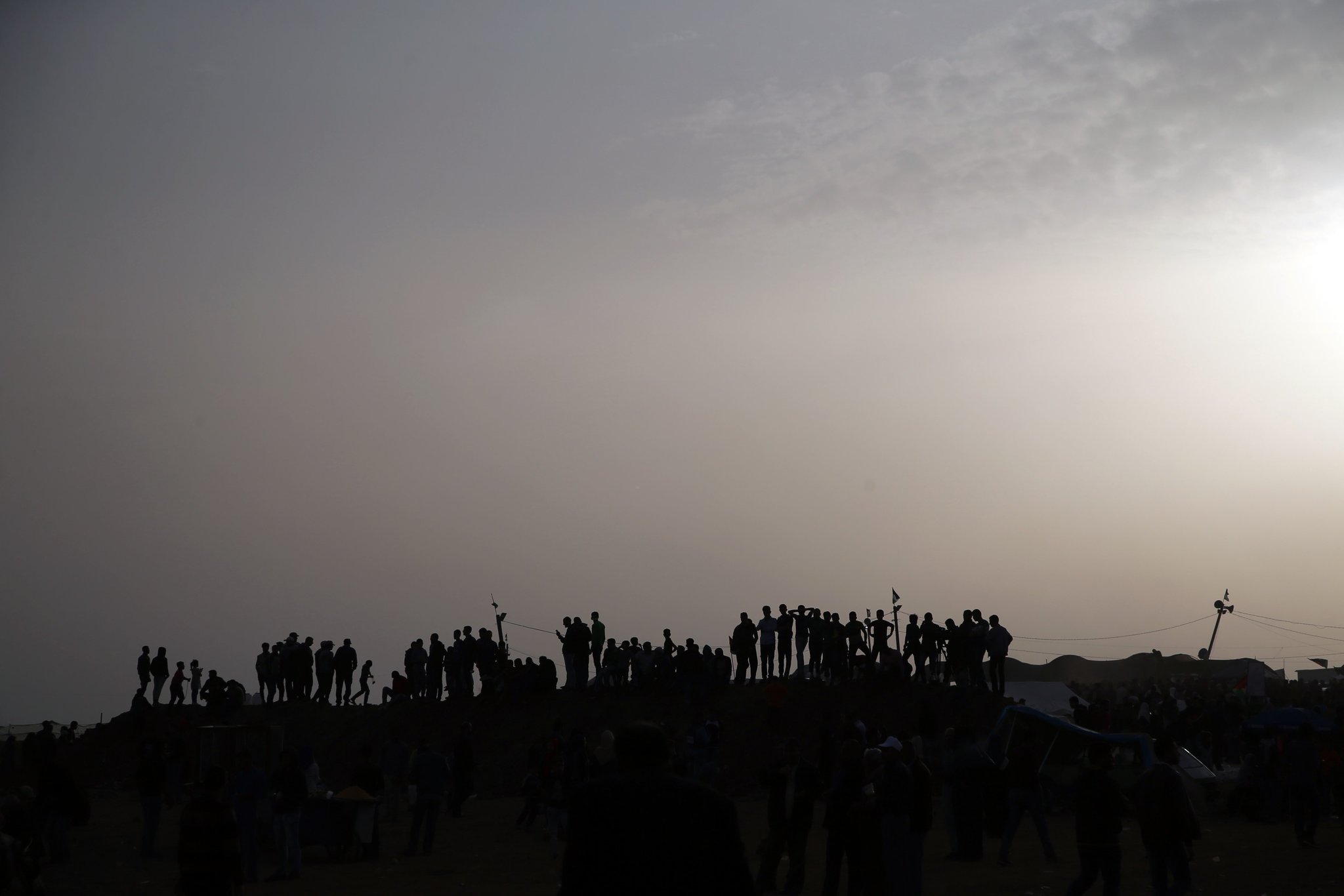 His question stayed with me as I went to the border encampment in eastern Khan Younis, the southern Gaza town where I live. It remained with me on the following Fridays as I continued to participate in the march activities, and it lingers with me now.

I cherish my life. I am the father of three precious children (Ali has a 4-year-old brother, Karam, and a newborn baby brother, Adam), and I’m married to a woman I consider my soul mate. And my fears were borne out: 39 protesters have been killed since the march began, many by sniper fire, including a 15-year-old last week and two other children on April 6. Israel is refusing to return the bodies of two of those slain.

Thousands more have been injured. Journalists have been targeted; 13 of them have been shot since the protests began, including Yasser Murtaja, a 30-year-old photographer, and 25-year-old Ahmed Abu Hussein, who died Wednesday of his injuries.

So why am I willing to risk my life by joining the Great Return March? 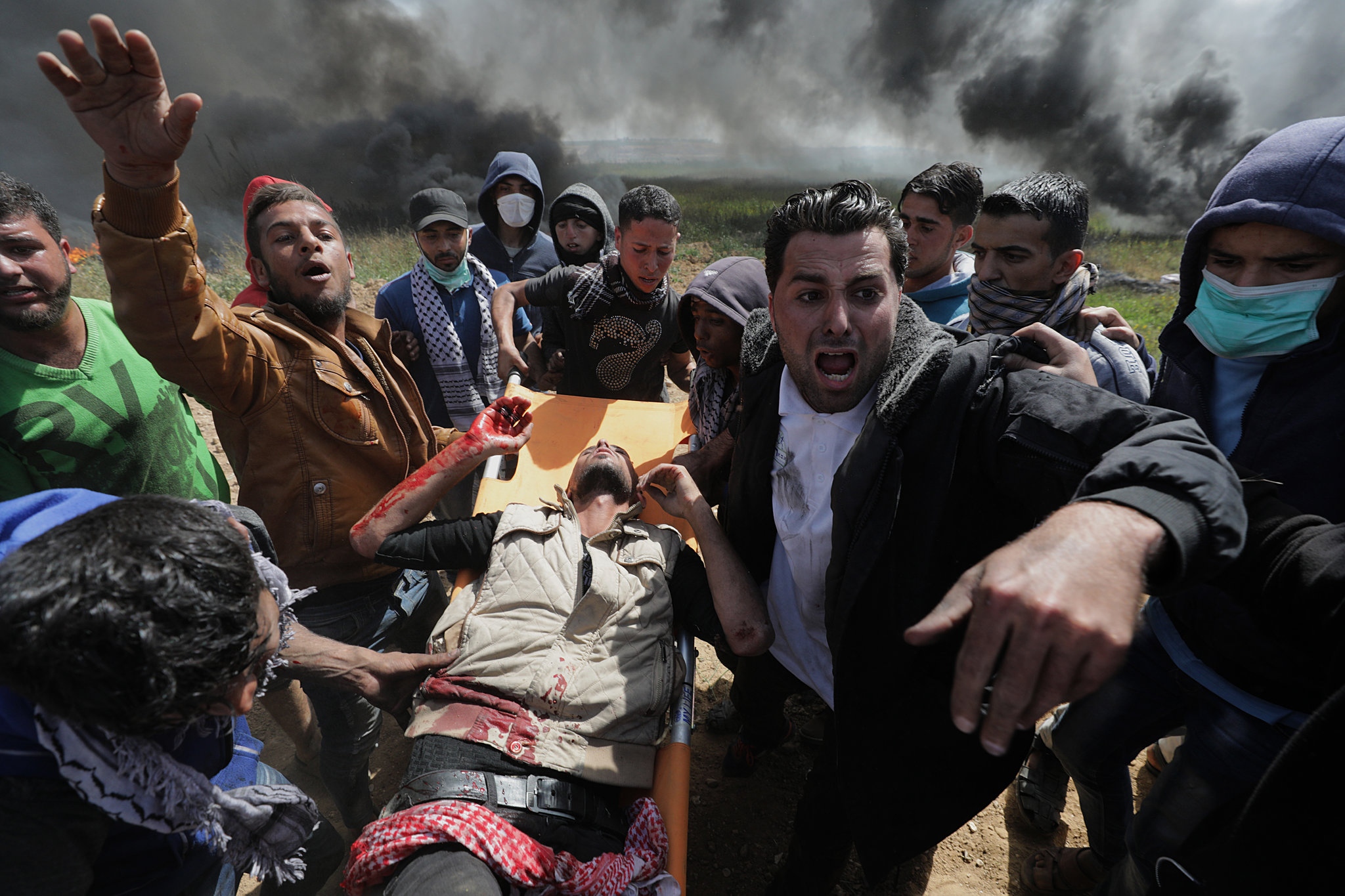 There are multiple answers to Ali’s question. I fully believe in the march’s tactics of unarmed, direct, civilian-led mass action. I have also been inspired by how the action has unified the Palestinian people in the politically fractured Gaza Strip. And the march is an effective way to highlight the unbearable living conditions facing residents of the Gaza Strip: four hours of electricity a day, the indignity of having our economy and borders under siege, the fear of having our homes shelled.

But the core reason I am participating is that years from now, I want to be able to look Ali, Karam and Adam in the eye and tell them, “Your father was part of this historic, nonviolent struggle for our homeland.”

Western media’s coverage of the Great Return March has focused on the images of young people hurling stones and burning tires. The Israeli military portrays the action as a violent provocation by Hamas, a claim that many analysts have blindly accepted. Those depictions are in direct contradiction with my experiences on the ground.

Representatives of the General Union of Cultural Centers, the nongovernmental organization for which I serve as executive director, participated in planning meetings for the march, which included voices from all segments of Gaza’s civil and political society. At the border, I haven’t seen a single Hamas flag, or Fatah banner, or poster for the Popular Front for the Liberation of Palestine, for that matter — paraphernalia that have been widespread in virtually every other protest I have witnessed. Here, we have flown only one flag — the Palestinian flag.

True, Hamas members are participating, as they are part of the Palestinian community. But that participation signals, perhaps, that they may be shifting away from an insistence on liberating Palestine through military means and are beginning to embrace popular, unarmed civil protest. But the Great Return March is not Hamas’s action. It is all of ours.

And our action has been so much more than tires burning or young men throwing stones at soldiers stationed hundreds of meters away. The resistance in the encampments has been creative and beautiful. I danced the dabke, the Palestinian national dance, with other young men. I tasted samples of the traditional culinary specialties being prepared, such as msakhan (roasted chicken with onions, sumac and pine nuts) and maftool (a couscous dish). I sang traditional songs with fellow protesters and sat with elders who were sharing anecdotes about pre-1948 life in their native villages. Some Fridays, kites flew, and on others flags were hoisted on 80-foot poles to be clearly visible on the other side of the border.

All this was taking place under the rifle sights of Israeli snipers stationed about 700 meters away. We were tense, we were fearful — indeed, I’ve been in the proximity of people getting shot and tear-gassed — but we were joyful. The singing, the dancing, the storytelling, the flags, the kites and the food are more than symbols of cultural heritage.

They demonstrate — clearly, loudly, vibrantly and peacefully — that we exist, we will remain, we are humans deserving of dignity, and we have the right to return to our homes. I long to sleep under the olive trees of Bayt Daras, my native village. I want to show Ali, Karam and Adam the mosque that my grandfather prayed in. I want to live peacefully in my historic home with all my neighbors, be they Muslim, Christian, Jewish or atheist.

The people in Gaza have been living one tragedy after another: waves of mass displacement, life in squalid refugee camps, a captured economy, restricted access to fishing waters, a strangling siege and three wars in the past nine years. Israel assumed that once the generation who experienced the Nakba died, the youth would relinquish our dream of return. I believe this is partly why Israel keeps Gaza on the brink of humanitarian collapse — if our lives are reduced to a daily struggle for food, water, medicine and electricity, we won’t be able to think about larger aspirations. The march is proving that my generation has no intention of abandoning our people’s dreams.

The Great Return March has kindled my optimism, but I am also realistic. Alone, the march will not end the siege and the occupation, address the huge power imbalance that exists between Israel and the Palestinians or right the historical wrongs. The work continues until everyone in the region can share equal rights. But I could not be more inspired by or proud of my people — seeing us united under one flag, with nearly unanimous acceptance of peaceful methods to call for our rights and insist on our humanity.

Every Friday through May 15, I will continue to go to the encampments. I will go to send a message to the international community about the devastating conditions in which I am forced to raise my sons. I will go so that I can glimpse our lands — our trees — on the other side of the militarized border as Israeli soldiers surveil me through their weapons.

If Ali asks me why I’m returning to the Great Return March despite the danger, I will tell him this: I love my life. But more than that, I love you, Karam and Adam. If risking my life means you and your brothers will have a chance to thrive, to have a future with dignity, to live in peace with all your neighbors, in your free country, then this is a risk I must take.

Fadi Abu Shammalah is the executive director of the General Union of Cultural Centers in Gaza and a co-producer of the documentary film “Naila and the Uprising.”