The Abu Rayya tragedy is a direct result of the blockade, as frequent power cuts have forced families in Gaza to use alternative fuel sources to fight the dark, often in hazardous conditions. 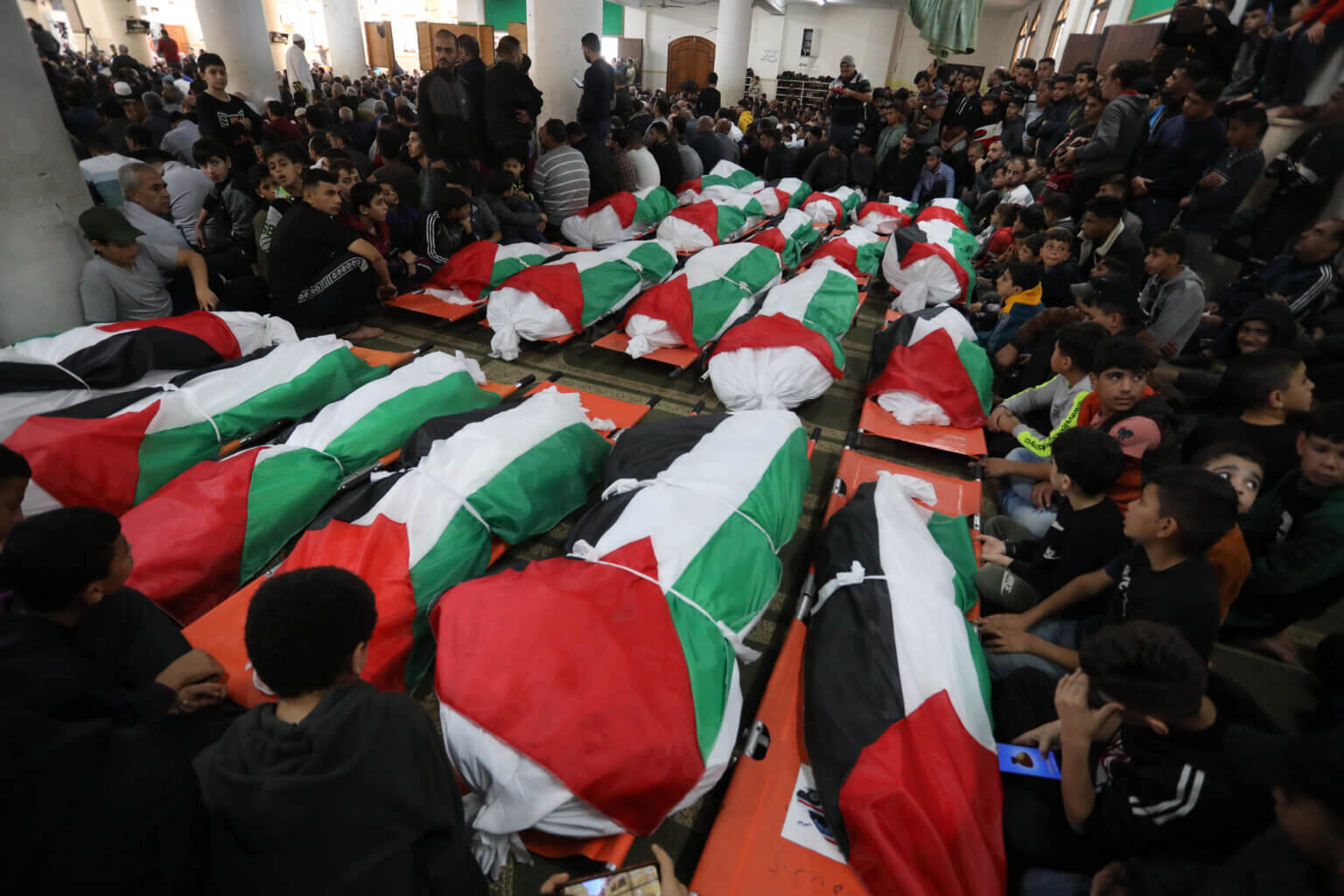 MOURNERS ATTEND THE FUNERAL OF 21 PALESTINIANS WHO DIED IN A FIRE THAT BROKE OUT IN AN APARTMENT IN JABALYA REFUGEE CAMP IN THE NORTHERN GAZA STRIP, NOVEMBER 18, 2022. (PHOTO: ASHRAF AMRA/APA IMAGES)

It was a rough night in Jabaliya refugee camp, north of Gaza City. Neighbors could not sleep peacefully after what they saw on Thursday, November 17 — the image of the woman holding the steel bars of the window on the fourth floor, screaming and pleading for help as the fire raged on in the room behind her, lighting up the area with red flame. In a second, she was engulfed by the flames and fell down.

Neighbors tried to get into the building to help her and her family, but the locked steel doors shut them out. The fire burned alive her extended family of 21 people, leaving the exact cause of the fire uncertain.

They had all gathered inside a single apartment to celebrate one of the family’s sons who had completed his PhD and arrived from Egypt a week earlier, as well as the birthday of one of the grandsons. The father, Subhi Abu Rayya, 51, the mother Yusra Abu Rayya, 44, and their sons and families, were among the dead. 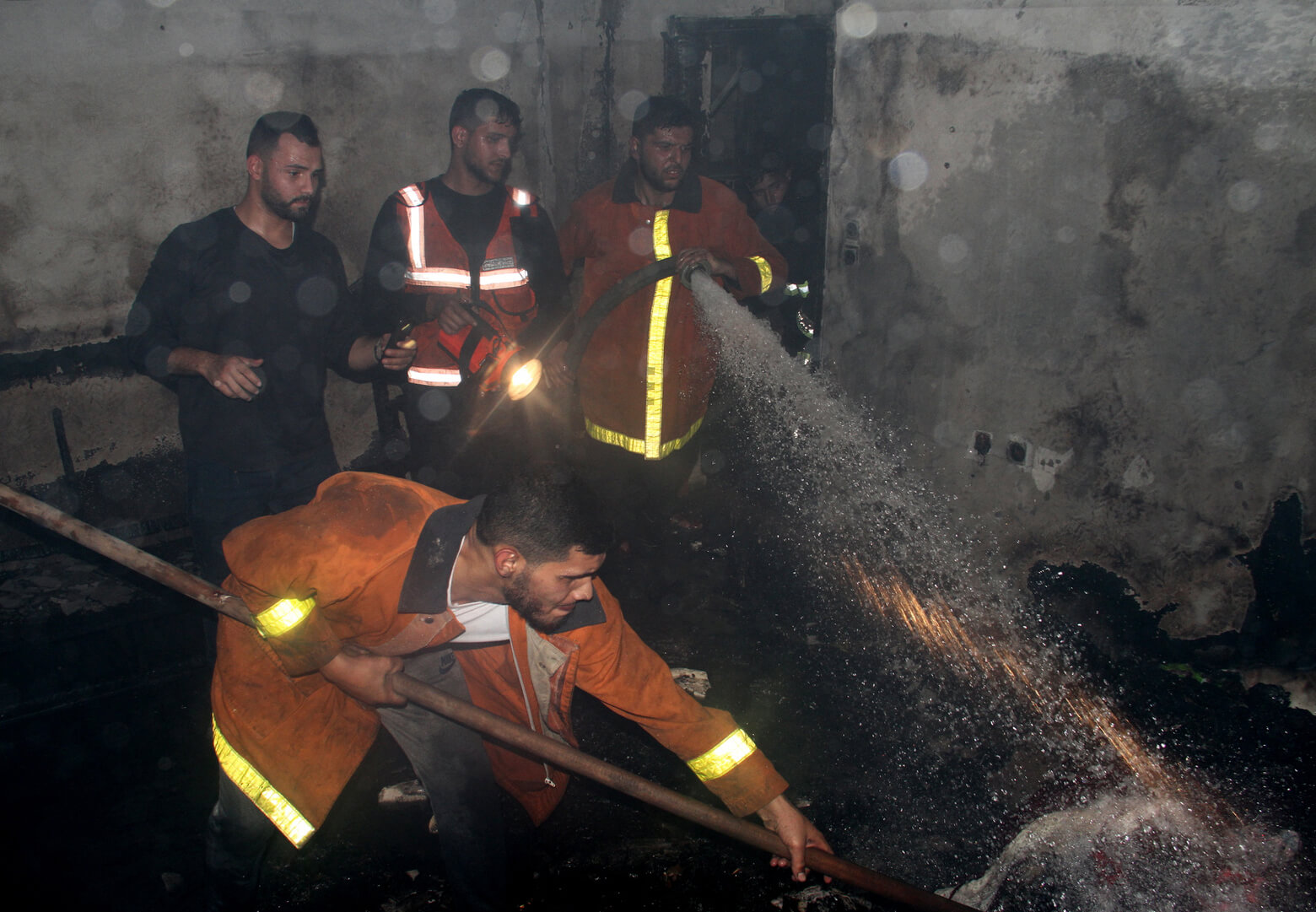 Palestinian firefighters extinguish a fire that broke out in an apartment in the Jabaliya refugee camp in the northern Gaza strip, on November 17, 2022. A large fire that ripped through a home north of Gaza City killed at least 21 people, including seven children, official and medical sources said. (Photo” Palestinian Ministry of Interior/APA Images)

Neighbors in the area told Mondoweiss that a huge flame had gone up and people were trying to go into the apartment to help, but were unable due to the locked doors. The police were the first to arrive and break the doors down, while firefighters and their trucks took over 40 minutes to arrive on the scene.

The tragedy of the Abu Rayya family quickly became what everyone in Gaza was talking about, as speculations abound as to the origins of the fire. Thousands of people came from all over the Gaza Strip to participate in the funeral.

“Everyone is so shocked. Look at their faces, look at how it has affected them,” Abdulnasser Abu Rayya, 41, a family relative of the victims, said as he walked through the funeral procession on the way to the cemetery. Abdulnasser has tried to understand what happened, but all that comes to his mind is a flashback from when entered the apartment that day as it was already on fire, witnessing his relatives burning alive.

“One mother was holding her two kids. Both of them were lying down on her lap. It looked like the mother was trying to protect her children from the fire. They were in there for an hour before the fire was extinguished,” Abdulnasser said.

The Internal Ministry in Gaza commented on the accident, stating that initial results from investigations have confirmed that the family was storing a large amount of gasoline inside the apartment, which presumably is what caused the huge conflagration.

“When we entered the apartment, we could not definitively figure out what caused this fire,” Abdulnasser told Mondoweiss. “We start to ask whether they kept gasoline in the house, or whether the cooking gas had leaked at the same time.” Abdulnasser confirmed that no sound of an explosion had been heard at the time of the fire. 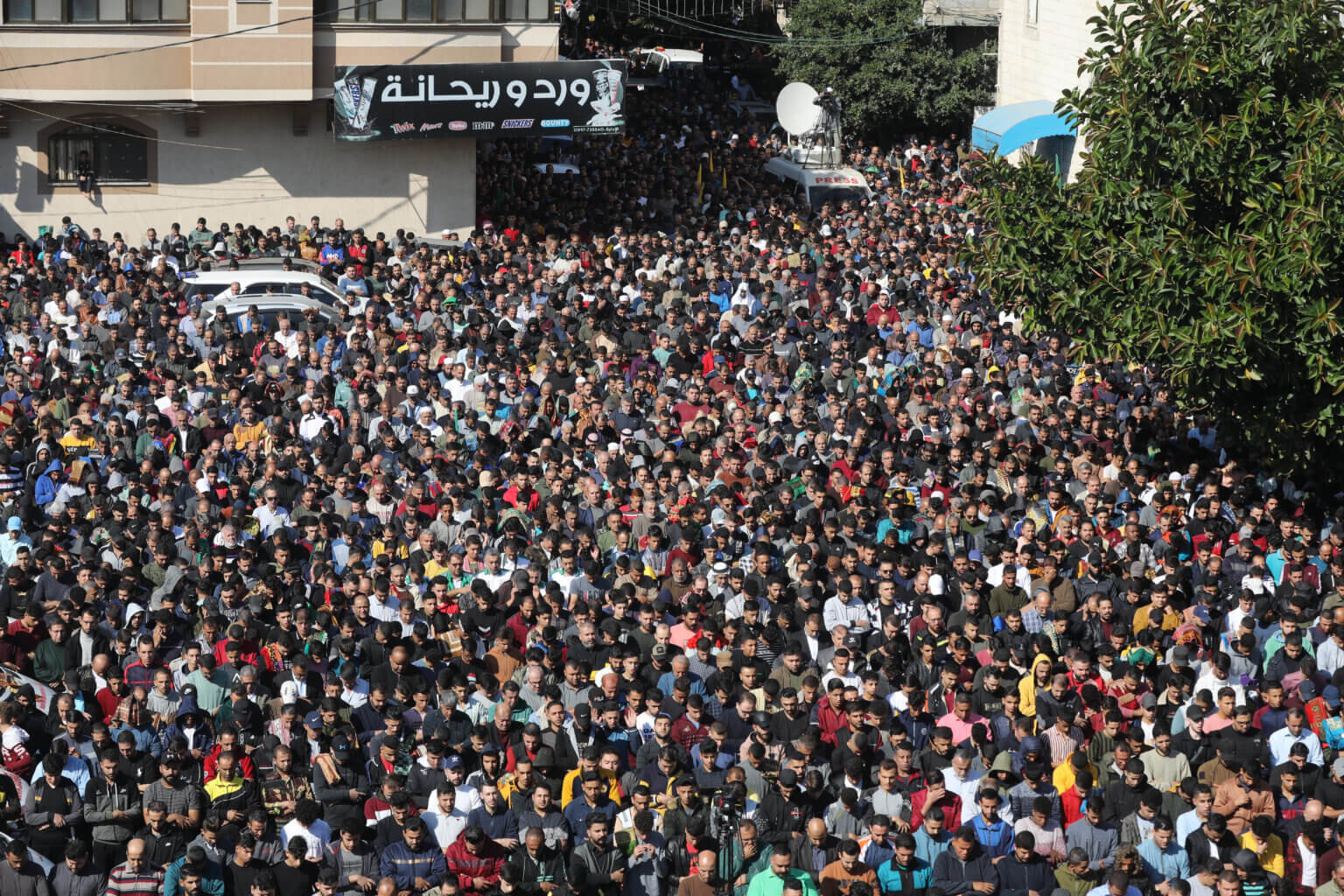 Mourners attend the funeral of 21 Palestinians who died in a fire that broke out in an apartment in Jabaliya refugee camp in the northern Gaza Strip, November 18, 2022. (Photo: Ashraf Amra/APA Images)

Storing deadly materials in living quarters, such as gasoline, unsaved electricity cables, and batteries to light up glow-lamps during power outages, are fairly common in Gaza, explained by the 15-year blockade that has harshly restricted power sources in Gaza.

Due to frequently scheduled power cuts, people use alternative energy sources to fight the darkness and light up their homes. In 2006, 3 kids in the Al-Hindi family burned to death in their room at Al-Shati refugee camp, in a fire that was caused by a candle they used in their room.

Abu Rayya’s neighbors said the family used a generator that ran on gasoline, which is likely why the family had stored reserves of it in the house.

“It is a painful reminder of the unlivable conditions we have to endure in Gaza,” 51-year-old resident Abu Ayman Al-Bardwil told Mondoweiss. “The building is now empty. If we had normal electricity, they would not have stored all that gasoline for their generator, and they would survived.”

During the winter, electricity hours are rationed to the minimum, as some areas receive power for only 3 – 4 hours a day. As a result, most households in Gaza are forced to rely on alternative fuel sources to ride out the winter.

The Hamas government in Gaza, which has held power in the coastal Strip since 2007, held the Israeli siege on Gaza responsible for the tragedy.

“The Israeli siege and its ban on materials and equipment for use by the Civil Defense directly impacted this tragedy. The occupation is fully responsible for this disaster, which is caused byt the siege,” Abdullatif Al-Qanoa, a Hamas government spokesperson at the funeral, told Mondoweiss.

Al-Qanoa appealed to the international community “and the free humans in the world” to put pressure on Israel to end its siege on Gaza.

“This is just another other face of the Israeli siege,” Al-Qanoa said.

Tareq S. Hajjaj is the Mondoweiss Gaza Correspondent, and a member of Palestinian Writers Union. He studied English Literature at Al-Azhar university in Gaza. He started his career in journalism in 2015 working as news writer/translator at the local newspaper Donia al-Watan. He has reported for Elbadi, Middle East Eye, and Al Monitor. Follow him on Twitter at @Tareqshajjaj.