In socially conservative Gaza, women have been leading the Great Return March movement, uniting all Palestinians. 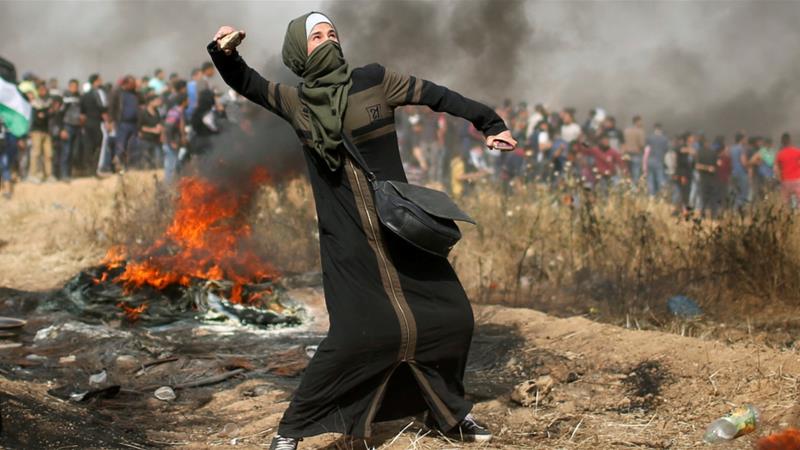 ‘I loved the sense of unity we all felt when both young men and women helped each other during the march protest,’ said Taghreed al-Barawi, seen in the photo [Mohammed Salem/Reuters]

Gaza Strip – On one side of the fence, dozens of Israeli soldiers lay positioned behind sand dunes, tracking the Palestinian demonstrators through the crosshairs of their snipers.

On the other side, young women, with keffiyeh scarves covering half their faces to avoid tear gas suffocation, stand in front of the young protesting men, providing cover.

“Women are less likely to be shot at,” said 26-year-old Taghreed al-Barawi on April 13, while attending the third consecutive Friday protests in Gaza near the Israeli border with her younger sister and a group of friends.

“We live in a male-dominated society and women’s participation in protests can be a strange scene for some people in Gaza. However, this time men somehow were more accepting and encouraging. It seems like they finally realised that we’re all part of this and women should be present,” Barawi said.

But being female is no guarantee for protection.

Some 1,600 protesters, including 160 women, have been wounded and more than 30 have been killed by Israeli snipers since the Great Return March movement began on March 30, marked as Land Day for Palestinians.

Even though Barawi inadvertently choked on tear gas numerous times and felt like she was about to faint, the thought of quitting the protest didn’t cross her mind.

“I had this feeling of strange courage, or I don’t know what to call it – it’s as if the nearer I got to the border, the stronger my desire was to move forward. Maybe it was the urge to come closer to our home and visit it [territories that Israel took over in 1948].

“Personally, I’m also inspired and intrigued by Ahed Tamimi and her bravery standing up to the Israeli army,” Barawi said.

The Great Return March is a non-violent, grassroots movement that calls for the right of return of Palestinian refugees to their homes, as per the UN Resolution 194, from which they were expelled in 1948 when the state of Israel was created.

Thousands have been participating in the mass sit-in, with dozens of tents erected along the border with Israel. Each tent is labelled with the name of the town that the family was expelled from in 1948. It’s the largest mass protest Gaza has seen since the first Intifada.

The Palestinian territory with nearly two million population can only be accessed via Egypt and Israel but an Israeli-Egyptian blockade has been suffocating the Strip for 11 years. Living conditions have deteriorated over the years and unemployment wavers around 43 percent. Residents say they have reached a breaking point.

Palestinians have been protesting along Gaza’s border every Friday afternoon for years, but what is noticeably different this time is that a large number of women and girls have been actively participating on a scale not seen before.

And that’s why this Friday’s protests have been labelled the “Women’s March of Gaza”. 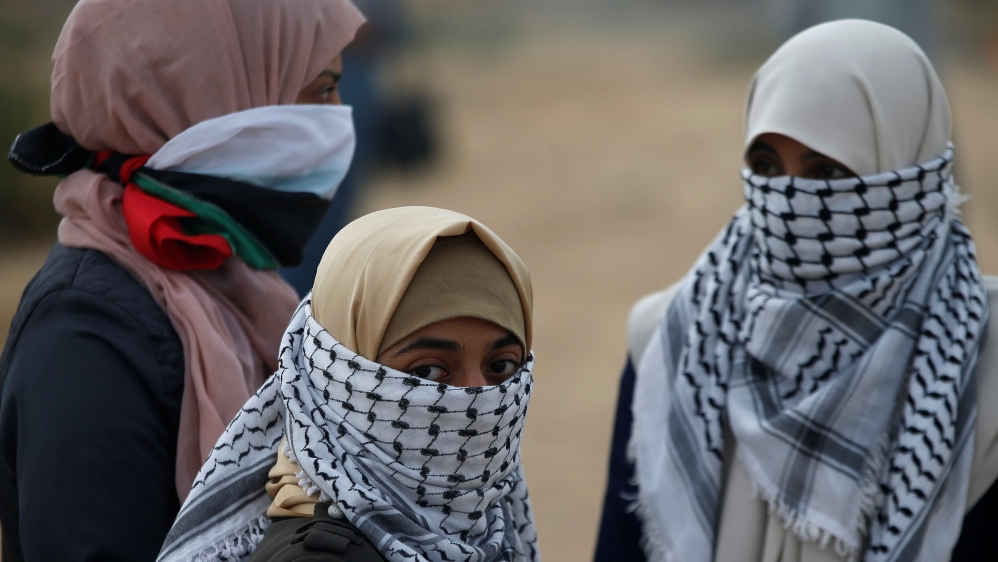 Palestinian women gather near the Israel-Gaza border during a tent city protest demanding the right to return to their homeland, east of Gaza City [Mohammed Salem/Reuters]

‘My duty and responsibility’

Among those wounded and killed by Israeli snipers so far have not just been demonstrators, but journalists and medics too.

Razan al-Najjar is a 20-year-old volunteer nurse who has been working 12-hour shifts every day since the march started to aid those wounded.

Najjar herself has been hurt. She has fainted twice due to gas inhalation, while on April 13 she broke her wrist after falling while running to attend to a wounded protester.

Many urged her to take the ambulance to the hospital, but Najjar kept working.

“The Israeli army does intend to shoot as many as they can. It’s crazy and I’d be ashamed if I was not there for my people,” Najjar said.

“It’s my duty and responsibility to be there and aid those injured.”

Some of the injuries Najjar and her colleagues treat are ghastly – many of the hurt protesters arrive with large, gaping wounds, their flesh fully exposed due to the use of explosive bullets. Many of them have had their legs amputated.

“Take care of my mother and my brothers Razan,” a young man told Najjar, she recalled, as he set out into the field to take part in the protest. He was shot dead later that day by an Israeli sniper.

“It breaks my heart that some of the young men who were injured or killed made their wills in front of me,” Najjar told Al Jazeera. “Some even gave me their accessories [as gifts] before they died.”

One photograph that has gone viral shows 16-year-old Hind Abu Ola running away from the border fence with four young men rushing behind her, linking hands to form a human chain to protect her from flying bullets.

The teenager had seen that the young men had been suffocating and losing consciousness due to the large amount of tear gas dropped near the border fence.

Armed with onions and a bottle of perfume in her bag, she then ran towards them and helped revive them.

At that time, they found themselves under fire from Israeli snipers, so all five of them started sprinted back.

The Women’s Committee of the march later honoured Abu Ola, who has become a symbol of women’s resistance.

Barawi, the protester, explained that the active participation of women has helped in uniting Palestinians and strengthening the movement.

“I think that’s something Hamas and Fatah realised and touched on in the march. There’s no difference between a Hamas martyr and a Fatah martyr. The Palestinian woman will grieve both equally. This march was great because it brought that to people’s attention. I saw no flags but Palestine’s,” Barawi said.

“I loved the sense of unity we all felt when both young men and women helped each other.”

The women’s participation also caught the attention of Israeli army spokesman Avichay Adraee who advised Palestinian women on Twitter that it was best for them to stay at home.

Translation: “The good woman is the honourable woman, who takes care of her home and her children, and serves as a good example to them. However, the deprived woman who lacks honour does not take care of these things, acts wildly against her feminine nature, and cares not for how she is seen in society.”

“A woman’s beauty is in her feminity and her weapon is her brain. So where are these traits in the vandal’s personality?” 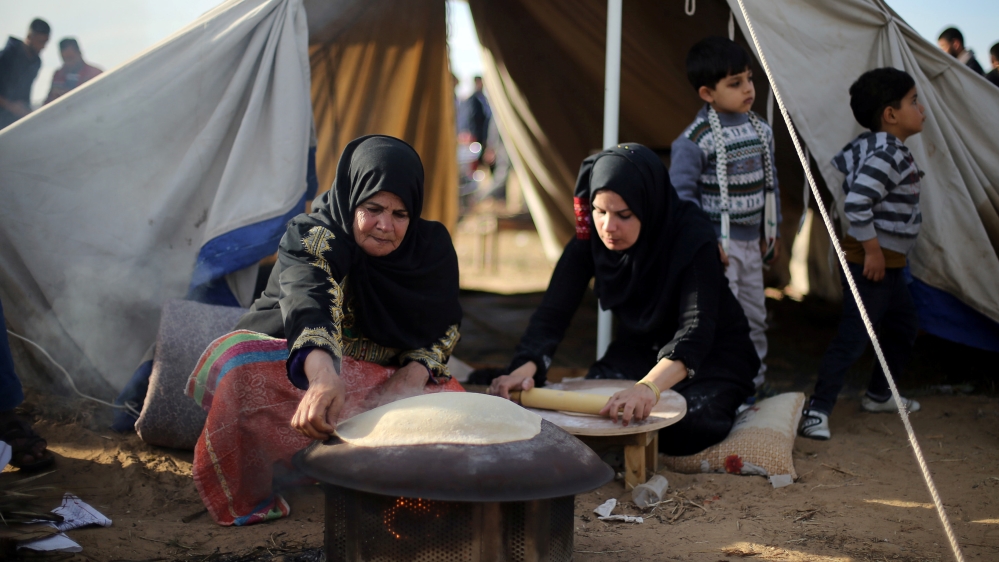 Palestinian women have many times in the past led successful non-violent resistance against the Israeli occupation.

Studies have shown that movements that welcome women into leadership positions are more likely to achieve their goals due to their use of non-violent tactics, which typically lead to more peaceful and democratic societies. 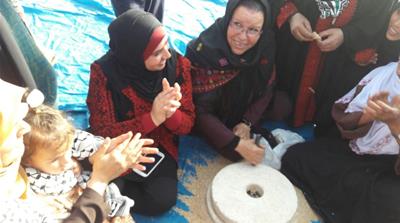 “The Palestinian woman is an integral pillar of the national movement and community. She’s the big-hearted patient, struggling mother, big sister and little daughter,” said Hamad, the head of the Women’s Committee of the march.

“Women’s presence at the march sends a clear message to the world that our protest is non-violent and peaceful. The Palestinian woman is a struggling woman but also a leading one, especially when it’s a national duty.”

For the April 20 protests, the women’s committee will be organising cultural and awareness programmes. Elderly women will be telling their tales of the Nakba – the ethnic cleansing of Palestinians in 1948 – to the youngest and making traditional Palestinian food, while the youth will be performing the traditional dabke dance.

“This will plant a lot of seeds of awareness among younger generations of women,” Hamad said.

Rana Shubair has been bringing her children regularly to the protest so they can learn about their historical homeland. Just a few kilometres away, on the other side of Israel’s fenced border lie villages, many of which were destroyed during the Nakba and now stand abandoned.

Upon learning that most of historical Palestine now belongs to Israel, her friend’s child asked: “Why don’t we tell the police?” Shubair recounted.

“I think that what this child proposed is what we, as Palestinians, are seeking – and that is to hold Israel accountable and to demand the application of UN resolution 194 on the Right to Return,” Shubair said.

“As a Palestinian, I belong to all of Palestine and I have the right to visit any Palestinian city. I want to be part of this protest to bring about the change I ardently believe in.”