Israel’s top court rejects the petition against the expulsion of Palestinian residents from villages in the West Bank. 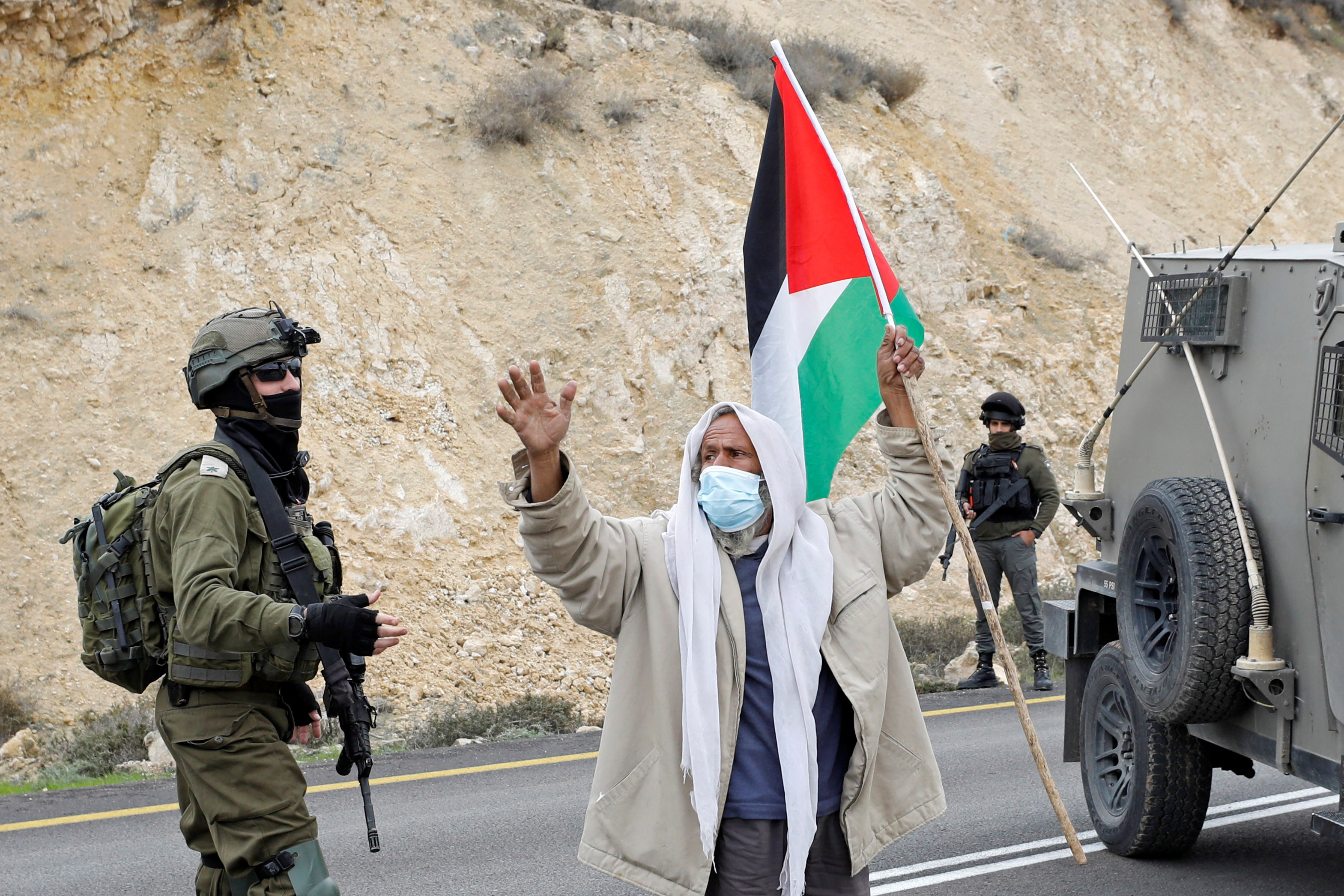 A demonstrator holding a Palestinian flag gestures as he stands next to Israeli forces [File: Mussa Qawasma/Reuters]

Rights groups have decried a decision by an Israeli court that paves the way for Israeli forces to forcibly expel Palestinian Bedouin communities in Masafer Yatta, an area in the southern occupied West Bank.

Israeli human rights group B’Tselem called on the international community on Thursday to prevent the transfer from happening, in what would be one of the largest single displacements of Palestinians in decades.

The call came a day after Israel’s high court rejected a petition against the forcible displacement of more than 1,000 Palestinians who reside in the area.

“The justices have thus proved once again that the occupied cannot expect justice from the occupier’s court,” the group said in a statement.

“The decision, weaving baseless legal interpretation with decontextualised facts, makes it clear that there is no crime which the high court justices will not find a way to legitimise.”

The occupation court just decided: My community will be destroyed. I live in Massafer Yatta, Palestine. An unjust 23 year long trial ended today with a verdict of mass eviction. The army can now place us on trucks, 2,400 people, and expel us from our ancient villages, one by one. pic.twitter.com/8szt0OdPdf

The Norwegian Refugee Council (NRC) has described the development as “dangerous”.

“The damage this decision will inflict on people’s homes and source of livelihoods is irredeemable. People could be made homeless overnight with nowhere for them to go,” Caroline Ort, NRC’s country director for Palestine, said in a statement on Thursday.

“This is a dangerous step that must be reversed. If followed through, it would constitute a violation of international law which prohibits Israel as an occupying power from transferring members of the occupied population from their existing communities against their will,” Ort added.

Masafer Yatta spans some 36km (22 miles) and is comprised of 19 Palestinian villages that are home to more than 2,000 people.

The Israeli military designated part of the area a closed military zone for training in the 1980s, and “they have sought to remove the communities on this basis”, according to the United Nations.

The court said in its ruling that the Palestinian residents had not been permanent residents of the area when the Israeli military first declared it a firing zone.

Masafer Yatta’s Mayor Nidal Younes was quoted by Palestinian news agency Wafa as saying that the court ignored all evidence provided by the families in the area that shows they resided there prior to the 1980s.

The Association for Civil Rights in Israel (ACRI) said the verdict would have “unprecedented consequences“.

At times, residents of Masafer Yatta were forced to temporarily evacuate their homes during military training for days at a time. Under international law, it is prohibited to use an occupied territory for a purpose that serves only the occupier and not the occupied population.

Israeli authorities have threatened the communities with home demolition orders under the pretext that they lack the correct building permits, which Palestinians say are impossible to obtain.

Officials from the Civil Administration, the Israeli military’s division that administers the West Bank, accompanied by Israeli soldiers and Border Police equipped with bulldozers, have foiled construction attempts or efforts to connect to the infrastructure by the Bedouin communities.

The West Bank was divided into Areas A, B and C as part of the 1993 Oslo Accords. Israel retains total military control of Area C while the Palestinian Authority (PA) has been granted limited powers to govern Areas A and B.

Masafer Yatta falls within Area C, comprising 60 percent of the West Bank, which the Civil Administration reserves largely for the benefit of Israeli settlers.

Israeli authorities have also expropriated thousands of dunams (1 dunam is equal to 1,000 square metres or about 0.25 acres) of land from residents to illegally establish settlements and outposts, including Ma’on and Havat Ma’on – whose residents have carried out attacks against the Palestinian communities.

Earlier this year, Amnesty International and Human Rights Watch said Israel is committing the crime of apartheid against Palestinians in the occupied Palestinian territories (OPT).

Since its establishment in 1948, Israel has pursued a policy of establishing and maintaining a “Jewish demographic majority”, Amnesty said. Israel also exercises full control over land and resources to benefit Jewish Israelis, including those in illegal settlements.

Israel has designated some 18 percent of the West Bank, or half of Area C, as military firing zones, in which any person is prohibited unless special permission is granted by the army.

Despite the prohibition, there are 38 small Palestinian communities – 12 of them in Masafer Yatta – home to more than 6,200 Palestinians located within these zones.

“The international community must prevent Israel from forcibly transferring the Masafer Yatta communities and make sure, should this crime be committed, that those responsible for it – including government ministers, the military top echelons, and the supreme court justices – will be held accountable,” B’Tselem said.