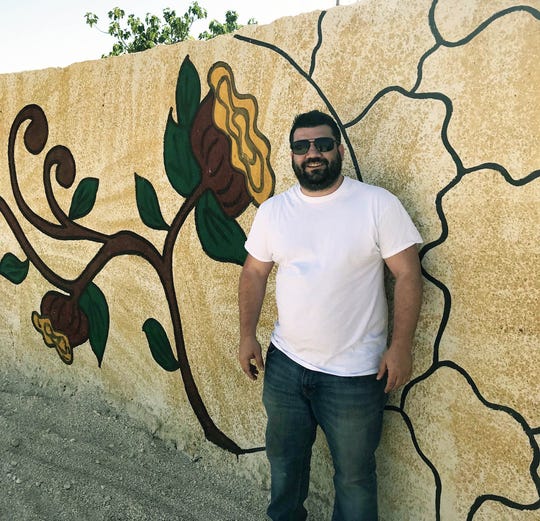 Pulled from multiple videos and posted on Twitter, it includes 33-year-old Milwaukee resident Ari Bloomekatz in the West Bank’s South Hebron Hills. The clip shows Bloomekatz in the thick of an altercation involving about 30 activists and a dozen Israeli security forces, some carrying rifles.

It shows an Israeli soldier delivering a swift punch to Bloomekatz’s face. “For what?” the tweet asks. “Rehabilitating a critical access road for Palestinians.”

Bloomekatz was among a group of 17 activists and journalists arrested last month while repairing a road in Palestinian territory controlled by Israel as part of a program sponsored by the Center for Jewish Nonviolence.

The managing editor of Milwaukee-based magazine “Rethinking Schools,” Bloomekatz is among a growing number of primarily younger American Jews challenging Israel’s occupation of Palestinian territory as morally indefensible and an affront to their faith.

“The American Jewish community needs to know that this is happening in our name and, in many ways, with our support,” said Bloomekatz, a former Los Angeles Times reporter and former managing editor of the left-leaning Jewish publication Tikkun.

“I and many other Jews across the country see our community’s support for the occupation killing the Judaism we love.”

The West Bank clip has been shared heavily in Jewish and Palestinian circles. Its virality reflects the concern among some American Jews about Israel’s policies in the Palestinian territories and sheds light on a deeply personal and painful conversation within the American Jewish community.

Even if they don’t support some Israeli policies, older Jews have tended to remain publicly silent, seeing criticism as an attempt to de-legitimize the Jewish state.

But a growing number of younger Jews, particularly millennials, have become less connected to the Jewish state, and less reticent about criticizing what they see as its shortcomings.

A study last year sponsored by the American Jewish Committee found that almost one-third of U.S. Jews, when asked to describe Israelis in familial terms, chose “not part of my family.”

Earlier this month, The New York Times reported that Jewish activists have begun to question Birthright Israel, which has provided nearly 700,000 young Jews free trips to Israel to foster a connection to the country. Some Birthright participants have walked off tours to meet with Palestinians and protest what they see as the organization’s failure to expose visitors to West Bank occupation.

The same report cited research by Don Waxman, professor of political science, international affairs and Israel studies at Northeastern University, showing 25% of Jews ages 18 to 29 believe Israel receives too much in the way of U.S. support, compared with just 6% of Jews over 50.

Elana Kahn, director of the Jewish Community Relations Council of the Milwaukee Jewish Federation, said her parents were born before a Jewish state had been established. Israel’s formation after World War II was “a huge moment as Jews — it was like they could begin to exhale.”

But Khan, who holds dual U.S. and Israeli citizenship, said youths often don’t feel the same way about Israel, and the community has struggled to facilitate conversations about the reasons why.

“They grew up in a world where Israel didn’t just exist, but Israel included the West Bank and became morally more complicated,” she said.

To repair and heal

The Palestinian territories — the West Bank including East Jerusalem, and the Gaza Strip — are lands once ruled by Jordan and Egypt that were captured by Israel in the 1967 Six Day War.

For decades, both Israelis and Palestinians have claimed the right to control the West Bank. Palestinians see it as part of their future homeland, and the United Nations Security Council considers Israeli occupation of the West Bank a breach of international law. Israel considers its position vital to the nation’s security. As talks to partition the land have failed, violent campaigns have been waged by both groups, often with Israeli and Palestinian civilians caught in the crossfire.

For Bloomekatz, Israel’s political drift to the right and its occupation of the West Bank is “horrifying.”

For him, the cornerstone interpretation of Judaism is the social justice principle “tikkun olam,” meaning to repair the world, and to heal.

“Everything that I do as a Jew, I believe needs to fit into that sort of mentality,” he said.

Earlier this year, Bloomekatz signed up for a nine-day stint with the Center for Jewish Nonviolence, and planned to spend the time working in small Palestinian villages and repairing a main road in the South Hebron Hills.

“The whole point in a lot of ways is to be able to carry stories back with us,” Bloomekatz said in an interview. “Hopefully better stories than unfortunately the ones that I have to tell today.”

On the morning of May 3, Bloomekatz and others partnered with Israelis and Palestinians to repair a road that provides villagers with the most direct access to food, water, health care and education. Activists said the stone-studded passageway has long posed hazards to travelers.

The road is near the Israeli settlement Mitzpe Yair, and spans an area the Israeli military has declared state land.

About an hour into moving gravel and filling potholes, Israeli military and police vehicles appeared on a nearby hillside, according to activists. They said soldiers confronted them and declared the area a closed military zone. The group was given 10 minutes to vacate.

Many defied the order.

Photos and videos taken at the scene show that Israeli soldiers beat, dragged and arrested activists. Four Jewish Americans recalled soldiers first targeting Palestinians, then moving to others. Some activists linked arms, and soldiers threw at least one stun grenade to disperse the group, activists recalled and a photograph confirmed.

Bloomekatz stood with his arms behind his back when a soldier delivered the swift punch seen in the Twitter video. Later, he was thrown into the back of a truck and banged his head. He said the scuffle left him with a concussion that still impairs his cognition more than a month after the incident.

Bloomekatz and Jacob Plitman, publisher of the left-leaning Jewish Currents magazine, both said they witnessed soldiers beat a Palestinian minor, who begged them to stop.

An Israel Defense Forces spokesperson said in an email that some activists “used violence towards the security forces and therefore were detained.” The spokesperson — who was not identified by name — declined to answer other questions about the charges.

The Journal Sentinel reviewed numerous photos and videos taken at the scene and could see no violence from activists.

“Not one of the 17 people arrested was charged with any form of violence against security personnel or others,” said Oriel Eisner, U.S.-based director of campaigns for the Center for Jewish Nonviolence. “The farcical IDF statement demonstrates both a lack of concern for the basic needs of these small South Hebron Hills communities and a disinterest in verifying the facts.”

Those arrested spent about 12 hours in jail, Schaeffer Omer-Man said.

‘You deserve it, traitor’

Janeen Najeeb, president and founding member of the Milwaukee Muslim Women’s Coalition, said such incidents are frequent for Palestinians who live in the occupied territories and are “common knowledge” among Milwaukee’s local Palestinian families.

She is also not surprised that younger American Jews are raising more concern about the rightward drift of Israeli politics.

“We are definitely seeing a major increase in the number of young Jewish Americans advocating for Palestinian human rights and against the occupation of the West Bank and East Jerusalem,” Najeeb wrote in a statement to the Journal Sentinel. “This is particularly the case on college campuses where issues of justice are are widely discussed.”

Bloomekatz is an active member of IfNotNow, a progressive American Jewish organization that opposes occupation. It has published nearly 60 testimonials from alumni of U.S. Jewish schools, camps and youth movements as part of its #YouNeverToldMe campaign. The testimonials all claim they were taught little about the occupation, or that it was presented in a biased way.

“I grew up thinking that dishonoring or questioning Israel was a terrible thing to do and that it meant you were a ‘bad Jew,'” wrote one alum of NFTY: The Reform Jewish Youth Movement. “I was even taught that people advocating for Palestine were ‘too radical’ and therefore not trustworthy.”

That perspective was reflected in some of the responses to the Twitter video of the soldier punching Bloomekatz. “Too bad they did not shoot you,” he was told, and, “You deserve it, traitor.”

Kahn said she didn’t doubt that for some in the American Jewish community, hearing Israel criticized in public “feels like an existential threat.”

Bloomekatz says he is not anti-Israel. He is a practicing Jew and has family members who live in the country.

What Bloomekatz does want is for a new generation of Jewish voices to be heard.

“The occupation is a daily nightmare for those who live under it,” Bloomekatz said, echoing IfNotNow’s founding principles. “And it’s a moral catastrophe for those who uphold it.”