For decades I argued for separation between Israelis and Palestinians. Now, I can imagine a Jewish home in an equal state. 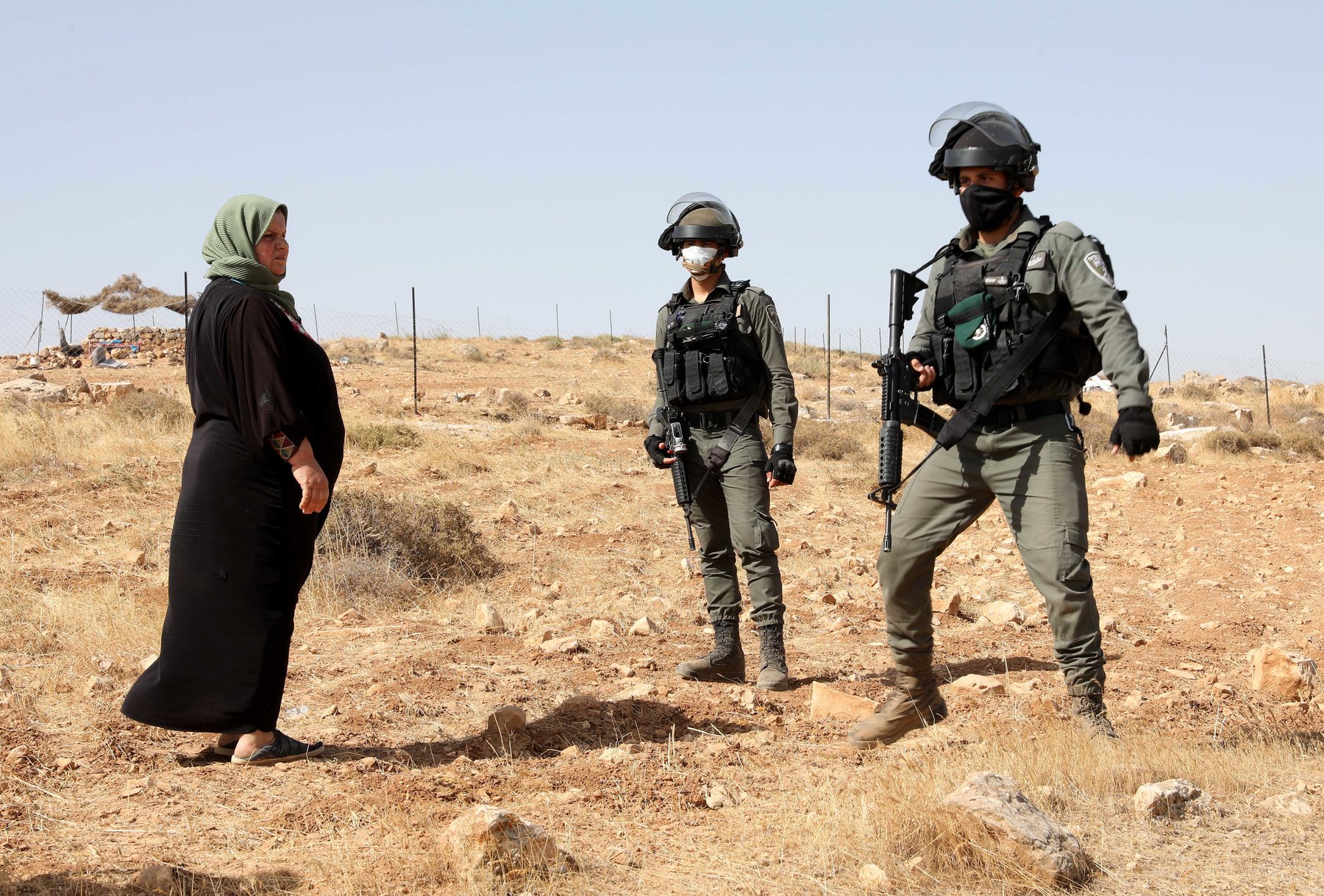 Israeli soldiers interacting in the West Bank last month with a Palestinian woman protesting the demolition of an unapproved animal shed. (Abed Al Hashlamoun/EPA, via Shutterstock)

I was 22 in 1993 when Yitzhak Rabin and Yasir Arafat shook hands on the White House lawn to officially begin the peace process that many hoped would create a Palestinian state alongside Israel. I’ve been arguing for a two-state solution — first in late-night bull sessions, then in articles and speeches — ever since.

I believed in Israel as a Jewish state because I grew up in a family that had hopscotched from continent to continent as diaspora Jewish communities crumbled. I saw Israel’s impact on my grandfather and father, who were never as happy or secure as when enveloped in a society of Jews. And I knew that Israel was a source of comfort and pride to millions of other Jews, some of whose families had experienced traumas greater than my own.

One day in early adulthood, I walked through Jerusalem, reading street names that catalog Jewish history, and felt that comfort and pride myself. I knew Israel was wrong to deny Palestinians in the West Bank citizenship, due process, free movement and the right to vote in the country in which they lived. But the dream of a two-state solution that would give Palestinians a country of their own let me hope that I could remain a liberal and a supporter of Jewish statehood at the same time.

Events have now extinguished that hope.

About 640,000 Jewish settlers now live in East Jerusalem and the West Bank, and the Israeli and American governments have divested Palestinian statehood of any real meaning. The Trump administration’s peace plan envisions an archipelago of Palestinian towns, scattered across as little as 70 percent of the West Bank, under Israeli control. Even the leaders of Israel’s supposedly center-left parties don’t support a viable, sovereign Palestinian state. The West Bank hosts Israel’s newest medical school.

If Prime Minister Benjamin Netanyahu fulfills his pledge to impose Israeli sovereignty in parts of the West Bank, he will just formalize a decades-old reality: In practice, Israel annexed the West Bank long ago.

Israel has all but made its decision: one country that includes millions of Palestinians who lack basic rights. Now liberal Zionists must make our decision, too. It’s time to abandon the traditional two-state solution and embrace the goal of equal rights for Jews and Palestinians. It’s time to imagine a Jewish home that is not a Jewish state.

Equality could come in the form of one state that includes Israel, the West Bank, the Gaza Strip and East Jerusalem, as writers such as Yousef Munayyer and Edward Said have proposed; or it could be a confederation that allows free movement between two deeply integrated countries. (I discuss these options at greater length in an essay in Jewish Currents). The process of achieving equality would be long and difficult, and would most likely meet resistance from both Palestinian and Jewish hard-liners.

But it’s not fanciful. The goal of equality is now more realistic than the goal of separation. The reason is that changing the status quo requires a vision powerful enough to create a mass movement. A fragmented Palestinian state under Israeli control does not offer that vision. Equality can. Increasingly, one equal state is not only the preference of young Palestinians. It is the preference of young Americans, too. 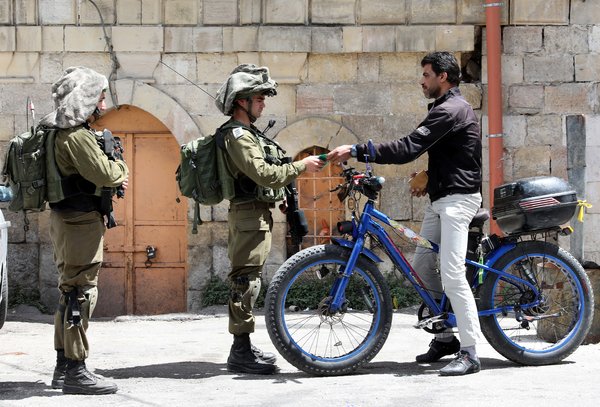 Israeli soldiers checking a Palestinian’s identification in the West Bank city of Hebron in June. (Abed Al Hashlamoun/EPA, via Shutterstock)

Critics will say binational states don’t work. But Israel is already a binational state. Two peoples, roughly equal in number, live under the ultimate control of one government. (Even in Gaza, Palestinians can’t import milk, export tomatoes or travel abroad without Israel’s permission.) And the political science literature is clear: Divided societies are most stable and most peaceful when governments represent all their people.

That’s the lesson of Northern Ireland. When Protestants and the British government excluded Catholics, the Irish Republican Army killed an estimated 1,750 people between 1969 and 1994. When Catholics became equal political partners, the violence largely stopped. It’s the lesson of South Africa, where Nelson Mandela endorsed armed struggle until Blacks won the right to vote.

That lesson applies to Israel-Palestine, too. Yes, there are Palestinians who have committed acts of terrorism. But so have the members of many oppressed groups. History shows that when people gain their freedom, violence declines. In the words of Michael Melchior, an Orthodox rabbi and former Israeli cabinet member who has spent more than a decade forging relationships with leaders of Hamas, “I have yet to meet with somebody who is not willing to make peace.”

Rabbi Melchior recently told me that he still supports a two-state solution, but his point transcends any particular political arrangement: It is that Palestinians will live peacefully alongside Jews when they are granted basic rights.

What makes that hard for many Jews to grasp is the memory of the Holocaust. As the Israeli scholar Yehuda Elkana, a Holocaust survivor, wrote in 1988, what “motivates much of Israeli society in its relations with the Palestinians is not personal frustration, but rather a profound existential ‘Angst’ fed by a particular interpretation of the lessons of the Holocaust.” This Holocaust lens leads many Jews to assume that anything short of Jewish statehood would mean Jewish suicide.

But before the Holocaust, many leading Zionists did not believe that. “The aspiration for a nation-state was not central in the Zionist movement before the 1940s,” writes the Hebrew University historian Dmitry Shumsky in his book, “Beyond the Nation-State.” A Jewish state has become the dominant form of Zionism. But it is not the essence of Zionism. The essence of Zionism is a Jewish home in the land of Israel, a thriving Jewish society that can provide refuge and rejuvenation for Jews across the world.

That’s what my grandfather and father loved — not a Jewish state but a Jewish society, a Jewish home.

Israel-Palestine can be a Jewish home that is also, equally, a Palestinian home. And building that home can bring liberation not just for Palestinians but for us, too.

Peter Beinart (@PeterBeinart) is a professor of journalism and political science at the Newmark School of Journalism at CUNY and editor at large of Jewish Currents.

The Times is committed to publishing a diversity of letters to the editor. We’d like to hear what you think about this or any of our articles. Here are some tips. And here’s our email: letters@nytimes.com.