‘This BDS win is because of our people power’

On Monday Ben & Jerry’s announced that it would stop selling ice cream in Israeli settlements. Israel has promised to fight the move “with all our might,” while activists say it is yet another sign of how BDS is entering the mainstream. 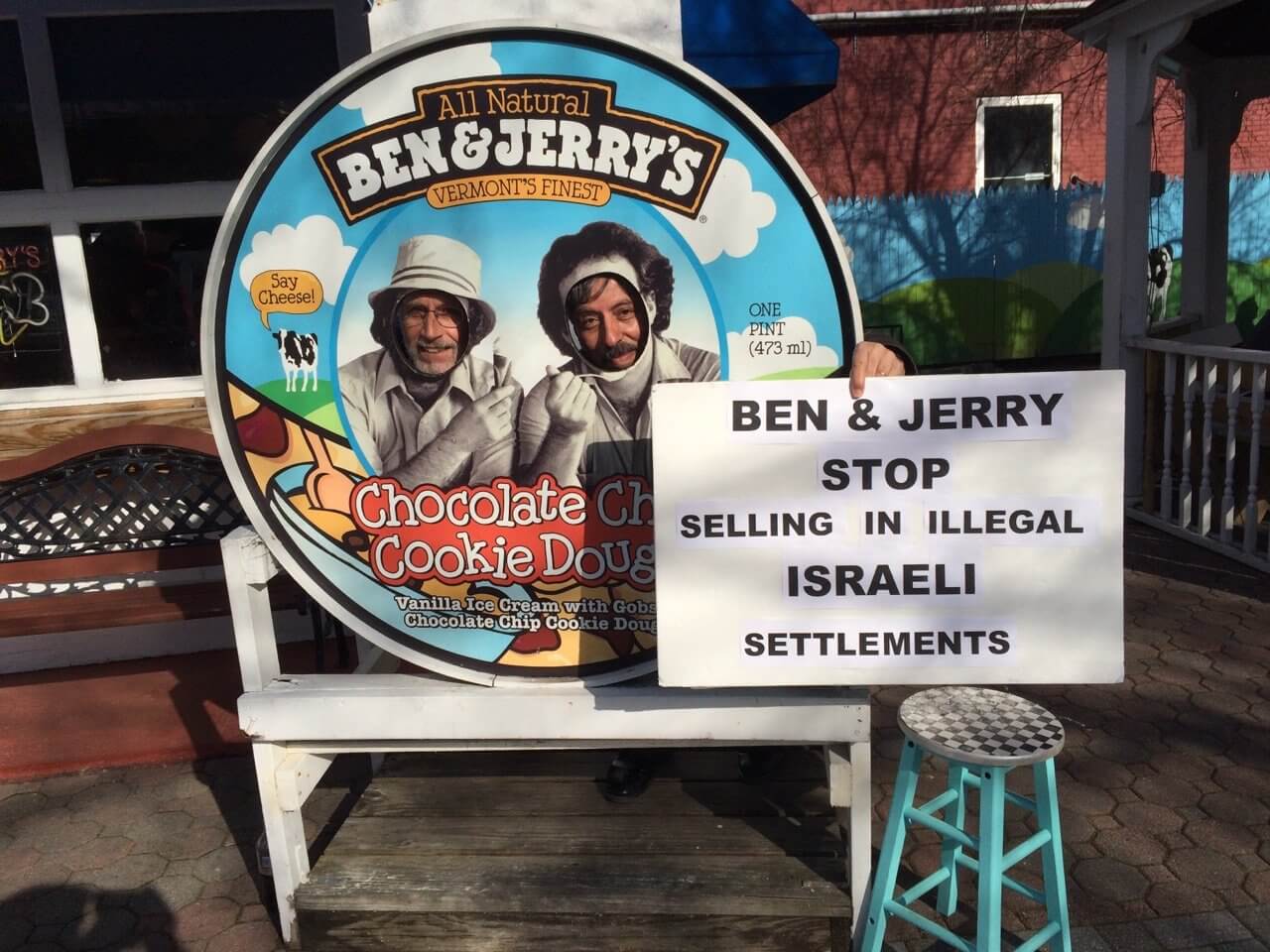 Boycott Ben & Jerry’s promotion by Vermonters for a Just Peace

On Monday Ben & Jerry’s announced that it would stop selling ice cream in Israeli settlements in the occupied Palestinian territory. The move comes after years of pressure from activists in the company’s home state of Vermont.

“We believe it is inconsistent with our values for Ben & Jerry’s ice cream to be sold in the Occupied Palestinian Territory (OPT),” reads a statement on the company’s website. “We also hear and recognize the concerns shared with us by our fans and trusted partners.”

“We have a longstanding partnership with our licensee, who manufactures Ben & Jerry’s ice cream in Israel and distributes it in the region,” it continues. “We have been working to change this, and so we have informed our licensee that we will not renew the license agreement when it expires at the end of next year.”

The company also indicated that it would stay in Israel under a different arrangement and share details connected to that move soon. However, a statement put out by Ben & Jerry’s Independent Board of Directors claims that disclosure was made by its CEO Matthew McCarthy  and parent company Unilever without first consulting the board.

The group Vermonters for Justice in Palestine (VTJP) has been leading a campaign against Ben & Jerry’s for years and in 2015 the company became a target of the Boycott, Divestment and Sanctions movement (BDS). However, the effort had received increased attention after Israel’s most recent attack on Gaza. Activists have drawn attention to the fact that the company has been connected to progressive causes since it was founded in 1978, but its social mission hasn’t extended to Palestine.

“In response to apartheid Israel’s forced displacement of Palestinians in occupied East Jerusalem and the recent massacre in Gaza, celebrities, politicians, public figures and those who support justice and equality for all have expressed public support for Palestinian freedom,” declared BDS co-founder Omar Barghouti recently. “We urge Ben & Jerry’s to stand in solidarity with Palestinians and affirm the inclusiveness of their progressive, anti-racist values.”

Palestinian groups praised the decision while highlighting the need for further action.

“Ben & Jerry’s, a leading socially responsible international company, is finally bringing its policy on Israel’s regime of oppression against Palestinians in line with its progressive positions on Black Lives Matter and other justice struggles,” said The Palestinian BDS National Committee in a statement. “We hope Ben & Jerry’s has understood that, in harmony with its social justice commitments, there can be no business as usual with apartheid Israel.”

“Ben & Jerry’s will end ice cream sales in the occupied Palestinian territories,” tweeted the US Campaign for Palestinian Rights. “This is an important victory & step forward. Since the Israeli state can’t be separated from its apartheid & occupation, the work continues.”

“This BDS win is because of our people power,” declared the Adalah Justice Project. Thank you Vermonters for Justice in Palestine, Movement for Black Lives, and all the organizers behind this win.”

“Our demand remains a complete disengagement from all business dealings with apartheid Israel,” it continued. “We applaud Ben & Jerry’s decision to end business in the settlements. Israel a settler colonial state from the river to the sea. We won’t rest.”

VTJP put out a statement declaring that Ben & Jerry’s intended moves fail to address their complicity in Israel’s human rights violations and continued occupation of Palestinian land. “By maintaining a presence in Israel, Ben & Jerry’s continues to be complicit in the  killing, imprisonment and dispossession of Palestinian people and the flaunting of international law,” said VTJP member  Kathy  Shapiro. “Israel destroys lives and property in the lands it occupies by force.”

VTJP also reiterated their three demands to the company:

1. End the marketing, catering and sales of Ben & Jerry’s products in Israel and Jewish-only  settlements in occupied East Jerusalem and the West Bank.

3. Issue a statement (a) calling on Israel to end its occupation and settlement enterprise and  (b) appealing directly to other socially responsible companies to do likewise and to cease  business operations in Israel and its illegal settlements.

While human rights organizations celebrated the victory, Israeli leadership, along with right-wing pundits and pro-Israel advocates, expressed disdain and some vowed to boycott the product.

Israel’s Foreign Minister Yair Lapid said the move was “a shameful surrender to antisemitism, to BDS and to all that is wrong with the anti-Israel and anti-Jewish discourse.” Lapid also said he would ask every state that passed BDS legislation to target the company. “They will not treat the State of Israel like this without a response,” he threatened.

Ben & Jerry’s decided to brand itself as anti-Israel ice cream,” said Bennett. “This is a moral mistake and I believe it will turn out to be a business mistake as well,” he said. “The boycott against Israel… reflects that they have totally lost their way. The boycott doesn’t work and won’t work and we will fight it with all our might.”

American Jewish Committee Managing Director of Public Affairs Avi Mayer tweeted, “Serious question: has Ben & Jerry’s ever refused to sell its products in any other disputed territory, anywhere in the world—or is this the only one? And another question: will Ben & Jerry’s refuse to sell their products to all the residents of the territory in question—or only to the Israeli Jews who live there?”

(The territory is of course not “disputed”, the consensus view of the international community is that the Israeli occupation is illegal and in violation of international law.)

“After years of paying tens of millions of dollars to BDS anti-Israel organizations and being subject to non-stop harassments and intimidation by the BDS movement, Jewish owned Ben & Jerry gives up and join the most antisemitic campaigns of the 21st century,” declared Israeli-American lobbyist Adam Milstein.

On Twitter some also pointed out how the decision shows the narrative around Israel is shifting within the United States, especially among liberals.

“Ben and Jerry’s discontinuing sales of products in Israeli settlements has more implications for the US debate than actual material implications in Israel-Palestine: It shows amongst liberals, there’s increasingly no appetite for complicity in the occupation,” tweeted journalist Alex Kane. “Ben and Jerry’s withstood pressure for eight years. The atrocities of May 2021 made that untenable. The result of a ton of different forces converging. Not to overstate the significance of it, but it’s one symbol of liberal views changing, driven by a Palestinian-led movement.”

That not selling to settlers is now considered acceptable liberal mainstream BDS-lite shows how far the narrative has shifted AND ALSO shows why it is so important to keep pushing for what Ben & Jerry’s independent board is committed to–pulling out of Israel entirely,” asserted activist Rebecca Vilkomerson.