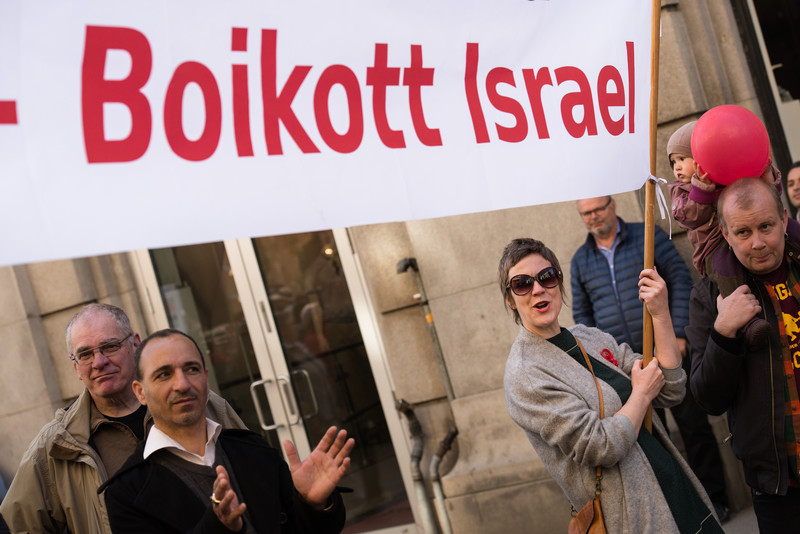 A UN list of companies that do business with Israel’s illegal settlements would boost the global movement for Palestinian rights. (Ryan Rodrick Beiler/ActiveStills)

UN officials are finally moving to hold Israel accountable for breaking international law, though they are facing fierce resistance from Israel and its allies.

“After decades of Palestinian dispossession and Israeli military occupation and apartheid, the United Nations has taken its first concrete, practical step to secure accountability for ongoing Israeli violations of Palestinian human rights,” said Omar Barghouti, a founder of the boycott, divestment and sanctions (BDS) movement. “Palestinians warmly welcome this step.”

On Wednesday, Israel’s Haaretz newspaper reported that the UN’s human rights office began sending letters to some 150 companies around the world warning them that they may be added to a database of firms doing business with Israeli settlements in the occupied West Bank, including East Jerusalem.

This week Nickolay Mladenov, the top UN political official in Jerusalem, told the UN Security Council that “Israel’s illegal settlement activities have continued at a high rate” in gross breach of UN resolutions.

There is a growing legal consensus that international law requires governments to prohibit all trade with the settlements.

Israeli officials have admitted that many firms – though they did not provide names – have already responded to the letters by assuring the UN human rights office that they will not renew their contracts in Israel or seek new ones.

“These companies just can’t make the distinction between Israel and the settlements and are ending their operations altogether,” a senior Israeli official told Haaretz. “Foreign companies will not invest in something that reeks of political problems – this could snowball.”

The senior Israeli official confirmed what a top EU diplomat had reported back to colleagues in Brussels.

In a June memo written when he was the EU ambassador in Tel Aviv, Lars Faaborg-Andersen admitted that the EU had no reliable way to distinguish exports from settlements from other Israeli goods.

The Israeli official’s comments also echo the findings of a secret report by two influential Israel lobby groups leaked to The Electronic Intifada earlier this year.

The report, which was endorsed by the Israeli government, concluded that most of the “collateral damage” being done to Israel by the BDS movement is a result of a growing “silent boycott” – groups, individuals and companies who make undeclared decisions to refrain from engaging with Israel, either because of their support for Palestinian rights, or simply to “avoid unnecessary problems and criticisms.”

Last month, The Washington Post named some of the American companies warned by the UN that they may be listed in the database.

They include household names such as Caterpillar, TripAdvisor, Priceline.com and Airbnb.

According to Haaretz, about 30 of the 150 companies are American while others are from Germany, South Korea and Norway.

Israel has set up a government task force to try to thwart the list, but according to Haaretz, most of the officials involved in the effort believe publication of the database in December is “inevitable.”

With the list looming, US lawmakers have proposed legislation – the Israel Anti-Boycott Act – that could impose harsh fines and prison terms for companies and their personnel who participate in a boycott of Israel and its settlements that is deemed to be encouraged by an international organization.

The intensity of the US pressure – and the long history of the so-called international community’s pandering to Israel – means that it cannot be taken for granted that UN officials will not capitulate again.

Two years ago, then UN Secretary-General Ban Ki-moon caved in to Israeli and American pressure and removed Israel from a UN list of serious violators of children’s rights.

In March, Ban’s successor Antonio Guterres bowed to US pressure and suppressed a report that found that Israel practices apartheid against Palestinians.

One of the conclusions of that report is that research and legal analyses by UN bodies – such as the United Nations Center Against Apartheid – were critical resources for civil society activists in their efforts aimed at “legitimating boycott, divestments and sanctions, and contributing to the overall formation of a transnational movement against apartheid in South Africa.”

“That Israel wants to nip the planned database in the bud is a sign of desperation,” Nieuwhof wrote. “Israel is already a pariah state in the minds of ordinary people around the world. If Israel’s crimes do not cease, its isolation will grow.”

“If implemented properly, this UN database of companies that are complicit in some of Israel’s human rights violations may augur the beginning of the end of Israel’s criminal impunity.”