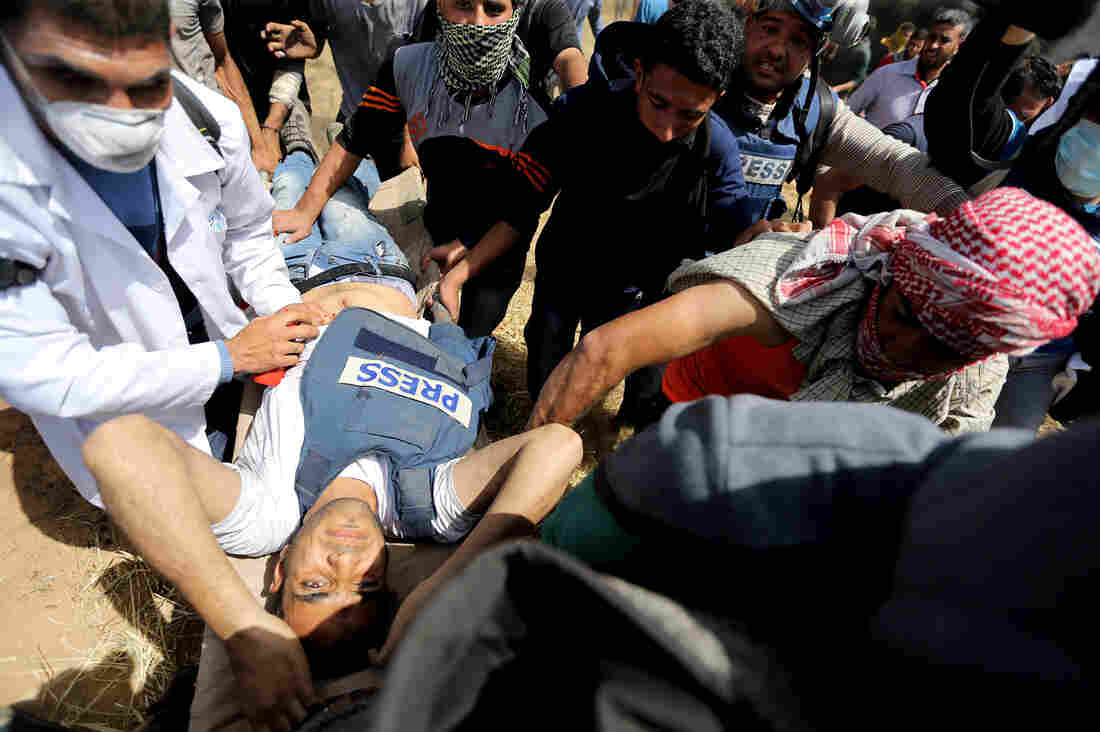 Palestinian journalist Yaser Murtaja, 30, is evacuated after being fatally wounded by Israeli fire while covering the Palestinian demonstrations at the Israel-Gaza border on Friday. Ibraheem Abu Mustafa/Reuters

Now his colleagues are covering his death.

They encircled his body, holding their cameras high, as he was carried out of Gaza’s main hospital on Saturday. They marched through the streets on their way to funeral prayers at the territory’s central mosque. Draped across his body was a Palestinian flag and a blue reporter’s flak vest.

Just one day before, Murtaja, 30, was at the Gaza-Israel border with his camera, covering demonstrations of some of the bloodiest violence Gaza has seen since the 2014 war between Israel and Hamas, the militant group that controls the Palestinian territory.

Over more than a week, tens of thousands of Palestinians gathered near Israel’s fortified border fence with the stated aim of demanding to return to lands their families lost in the 1948 war that led to Israel’s founding. But Israel accused Hamas of fomenting violence under the guise of a civil protest.

Many demonstrators stayed far back from the border fence, picnicking in the barley fields and holding a tent camp sit-in, but some young Palestinians burned tires and threw rocks toward the fence. Israel said there were also attempts to lob rudimentary explosives and damage or penetrate the border fence, as well as a pair of militants who shot at soldiers.

Israel said its troops fired tear gas, rubber bullets and live fire to prevent masses from crossing into Israel and in order to protect its border fence and soldiers. Gaza officials said Israeli troops have killed at least 29 Palestinians since last Friday and wounded hundreds. Palestinians and some rights groups say troops are firing on people even when they are unarmed or pose no immediate threat.

On Friday afternoon, Murtaja stood about 300 yards away from the fence, documenting Palestinians burning tires, said photographer Rushdi Serraj, a close colleague who said he was next to Murtaja when he was shot. “Suddenly, he shouts, ‘I’m injured, I’m injured, my stomach,'” Serraj recounted.

Photos show Murtaja on the ground, wearing a protective vest marked “PRESS” in big English letters. His family said he was hit by a bullet to an exposed side of his torso not covered by the front or back part of his vest.

The Palestinian Journalists’ Syndicate in Gaza said an additional five Palestinian reporters covering the border protests were wounded by Israeli fire. NPR met two of them, in hospital beds with serious leg wounds, who said they were shooting photos on the border and wearing PRESS-labeled vests when they were shot. 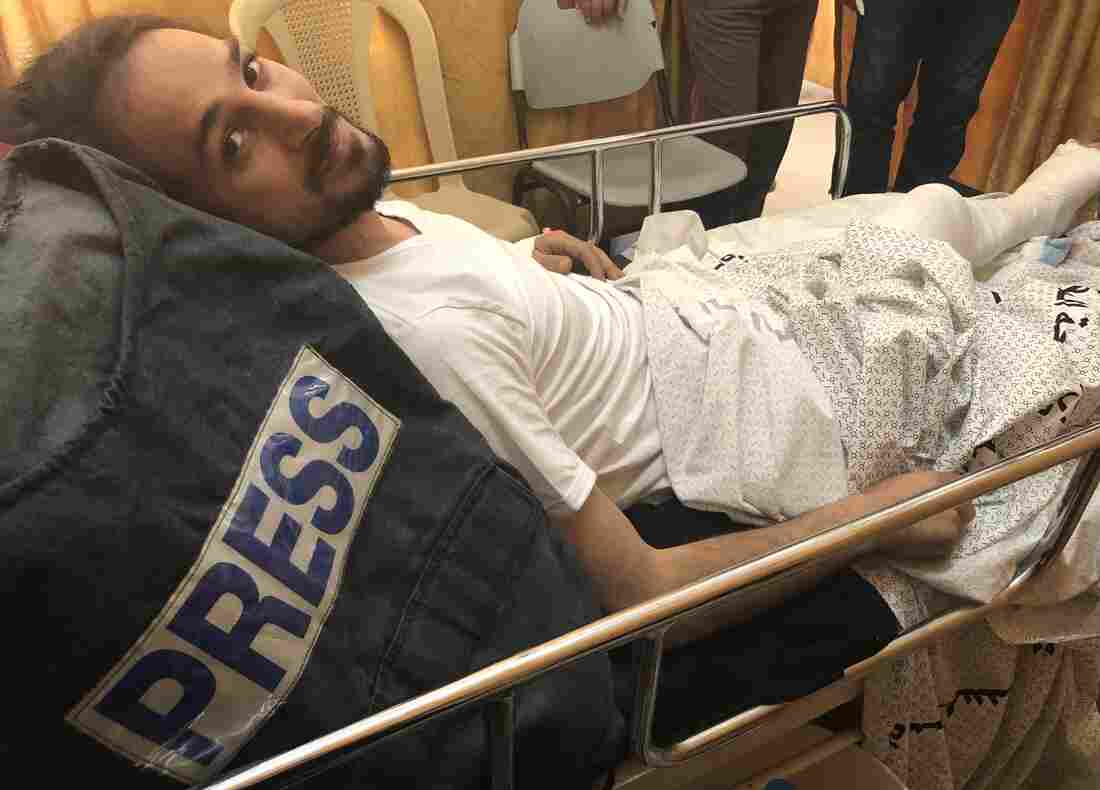 Adham Hajjar, 32, says he was wearing a vest marked “PRESS” when he was shot in the leg while covering protests at the Gaza-Israel border on Friday. Daniel Estrin

The Israeli military said it does not intentionally target journalists and is looking into the matter. Hours before Murtaja was shot, Lt. Col. Jonathan Conricus, a military spokesman, said soldiers employ lethal fire only as a last resort.

“No one gets shot by standing and looking. They are shot after commanders specifically approve it against a specific person or threat,” Conricus said.

Late Saturday, Israel’s Defense Minister Avigdor Lieberman seemed to suggest Murtaja had flown a drone above soldiers when he was shot. He also said Hamas men had dressed up as journalists. He did not provide evidence to back the claims.

“You don’t know who is a photographer and who is not,” Lieberman said. “Whoever employs drones above Israeli soldiers needs to understand he is endangering himself.”

The Foreign Press Association in Israel and the Palestinian territories called on the Israeli army to conduct a fast and open investigation, and to show restraint in areas where journalists work.

Murtaja’s colleagues said he’d done videography work for the BBC, VICE and other international media, and had worked with Chinese artist Ai Weiwei on his 2017 documentary, Human Flow. He was also a leading videographer for Ai Weiwei’s video installation, Journey of Laziz, which was recently exhibited Israel’s leading museum, the Israel Museum, in Jerusalem. The visual artist shared photos of Murtaja on his Instagram account on Saturday.

Yasser Murtaja, a 31-year-old Gaza photojournalist, was shot by Israel militants and died in hospital on Friday, April 6th, 2018. He worked as a cameraman for “Human Flow” in Gaza in 2016.

The video featured Gaza’s last tiger, pacing in his cage. An animal welfare group, Four Paws International, later evacuated the tiger from what it dubbed the “world’s worst zoo,” which had been facing meager resources.

Videographer Khaled Al Ashkar said Murtaja once joked that he wished the animal welfare group would take him out of Gaza too. Israel and Egypt have blockaded Gaza for the last decade, ever since Hamas took control, and travel out of Gaza is severely restricted.

On March 24, Murtaja posted a photo on Facebook: a bird’s eye view of Gaza’s Mediterranean shore, taken with his drone. He wrote: “I hope one day I can take such a photo while I’m in the sky,” meaning, in an airplane.

He signed off: “My name is Yaser Murtaja. I am thirty years old. I live in Gaza City. I have never traveled!”