Burger Ranch, a rival, announced it would open a branch in Ariel “for the glory of the state of Israel” 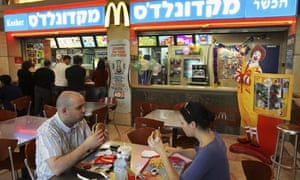 McDonald’s has refused to open a branch in an Israeli settlement in the West Bank in a move that swiftly prompted calls from settler organisations for a boycott of its restaurants.

McDonald’s, which has 180 outlets in Israel and dominates the domestic fast-food industry, declined an offer to open a restaurant in a shopping mall under construction in Ariel, a vast settlement which juts deep inside the West Bank.

The Israeli-owned franchise rejected the invitation, citing a long-term policy not to operate across the pre-1967 green line. “This has always been the policy of Dr Omri Padan [the franchise owner],” McDonald’s said. Padan, chief executive of McDonald’s Israel, was a founding member of Peace Now, the anti-settlement organisation.

Settlers’ representatives condemned the move. “McDonald’s has turned from a business into an organisation with an anti-Israeli political agenda,” Yigal Delmonti of the Yesha Council, a settlement umbrella organisation, told the Jerusalem Post. “We expect that Israeli citizens, especially those living in Judea and Samaria [the biblical term for the West Bank], will take this into account before entering the company’s franchises.”

The mayor of Ariel, Eliyahu Shaviro, told Ma’ariv: “The decision by McDonald’s not to open a branch in the Ariel mall is an unfortunate decision that discriminates against the residents of the city.” 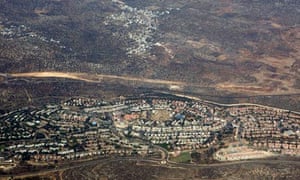 Aerial view of Ariel, West Bank. McDonald’s rival Burger Ranch plans to open a branch in the mall ‘for the glory of the state of Israel’. Photograph: Ariel Schalit/AP

Two members of the Israeli parliament, the Knesset, Ayelet Shaked and Zvulan Kalfa of the rightwing Jewish Home party, said they would boycott the burger chain.

Burger Ranch, McDonald’s main rival, announced it would open a branch in the Ariel mall “for the glory of the state of Israel”.

But Yariv Oppenheimer of Peace Now said: “In every democratic country, every person or company has the right to choose not to go against their values, ideology or morals. The decision of McDonald’s reflects this and we support it.”

He said Israeli businesses were under pressure to invest and operate in the West Bank, and “it’s important to advocate the right to choose. Companies cannot be forced to assist settlers”.

Padan was no longer active in Peace Now, he added, but had consistently refused to operate in West Bank settlements.

The Israeli government expects Ariel, home to about 20,000 settlers, to be on its side of a future border. But because it stretches from the green line halfway across the West Bank, almost reaching the Jordan valley, Palestinian officials say its inclusion in the state of Israel would virtually bisect a future Palestinian state. All settlements in the West Bank and East Jerusalem are illegal under international law.

In December Israel’s first settlement university was authorised in Ariel when the government upgraded a college. Some 165 Israeli academics had earlier called for a boycott of the university.

A state-funded arts centre, which opened in Ariel in 2012, has also been the subject of a cultural boycott. About 60 Israeli actors refused to appear at the Ariel Centre for Performing Arts, saying they did not wish to “strengthen the settlement enterprise”.