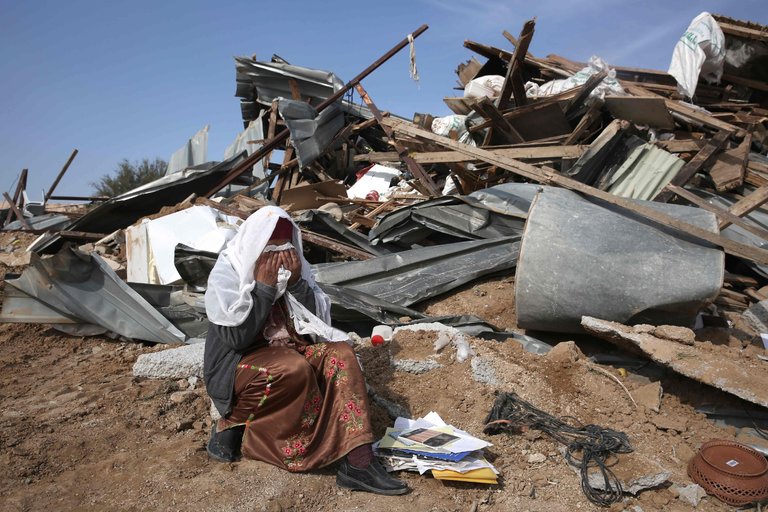 A Bedouin woman reacts to the destruction of houses by Israeli authorities on January 18, 2017 in the Bedouin village of Umm al-Hiran, which is not recognized by the Israeli government, near the southern city of Beersheba, in the Negev desert. (Menahem Kahana/Agence France-Presse — Getty Images)

HAIFA, Israel — Prime Minister Benjamin Netanyahu of Israel is expected to visit Washington this week to meet with President Trump, presumably to discuss the political philosophy they share: power through hate and fear. A government that bars refugees and Muslims from entering the United States has much in common with one that permits Israeli settlers to steal land from Palestinians, as a new law that Mr. Netanyahu’s coalition pushed through Parliament last week did.

Like Mr. Trump, Mr. Netanyahu used blatant race-baiting tactics to win his last election, in 2015. Since then, he has made discrimination against Palestinian citizens of Israel central to his agenda. This takes many forms; a particularly painful one is his government’s racist, unjust land use and housing policies.

In Arab towns, the government has made building permits so difficult to obtain, and grants them so rarely, that many inhabitants have resorted to constructing new housing units on their properties without permits just to keep up with growing families that have nowhere else to go. As a result, Arab communities have become more and more densely populated, turning pastoral villages into concrete jungles.

In southern Israel, more than 100,000 Arab citizens face a particular crisis. In the Naqab desert, known in Hebrew as the Negev, there are 35 villages that are officially “unrecognized” by the state. The residents of these unrecognized villages have Israeli citizenship, yet the state has refused to provide even basic services like water, electricity utilities, paved roads and schools.

Worse, because the Israeli government refuses to recognize these villages’ existence, they all live under the shadow of demolition orders from the state. Residents never know when the police will come to evict them and bulldoze their homes.

These policies have existed for decades, but Mr. Netanyahu has turned them into a political bludgeon. Several weeks ago, when it became clear that the government would be forced to implement an Israeli High Court ruling to evacuate Amona, an illegal settlement in the occupied West Bank built on land stolen from Palestinians, Mr. Netanyahu vowed to destroy Arab homes throughout Israel in retribution.

The prime minister soon made good on his threat. That was why, a few weeks later, a huge force of armed police arrived to destroy homes in the unrecognized village of Umm al-Hiran.

I first visited Umm al-Hiran not long after I had been elected secretary general of the Hadash party. I spent several weeks living in the Naqab and took part in a nonviolent protest against the demolition of another village, Al Araqib. I was beaten by police and arrested. I had to call my wife, Nardin, from jail. 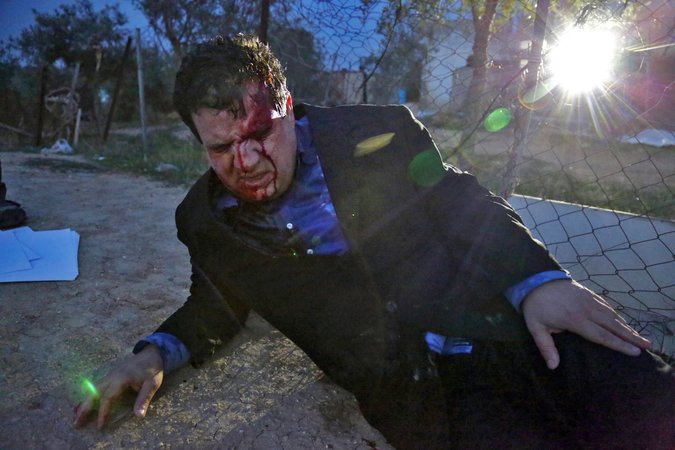 Ayman Odeh lays on the ground after he was injured during clashes that followed a demonstration against home demolition in the Bedouin village of Umm al-Hiran, near the southern city of Beersheba, in the Negev desert, early on January 18, 2017. (Keren Manor/Agence France-Presse — Getty Images)

After a long legal battle, the government has moved to destroy Umm al-Hiran so that a religious Jewish community can be built in its place. This new town would erase all traces of Arab presence, even replacing the town’s name with the more Hebrew-sounding Hiran.

The residents suggested a compromise: Create an Arab neighborhood within the new town so that their community could remain intact. The state rejected this idea: Hiran was to be for Jews only.

A few weeks ago, I had reason to call my wife from the Naqab again. This time, I was in an ambulance on the way to the hospital. On Jan. 18, as I stood with the residents of Umm al-Hiran, Israeli police who had arrived to demolish the village pepper-sprayed me and then shot me in the head and the back with baton rounds.

These bullets, which are about 3 inches long and 1.5 inches in diameter, have a hard plastic base and a high-density foam tip. Supposedly nonlethal, they have caused numerous serious injuries, including skull fractures and eye loss, and have been associated with at least one fatality. In my case, the bullet missed my eye and only grazed my skull.

More grave, police actions that day resulted in two deaths: Yakoub Abu al-Qai’an, a math teacher from Umm al-Hiran, was shot and killed while driving, and Erez Levi, a police officer, was hit by Mr. Abu al-Qai’an’s car after he was shot. The police put out a false narrative that this was a terror attack. The Joint List, the group I lead in the Knesset, Israel’s Parliament, has called for a full inquiry into the day’s events.

In the Naqab, the state claims “planning irregularities,” trespassing or environmental concerns as justification for refusing to recognize the villages and for destroying them. This is a grim farce. The reality for Arab citizens is Kafkaesque: The state refuses to create municipal plans to accommodate growing communities, and instead destroys homes that are built without permits it makes impossible to obtain.

Is this a way for a state to treat its citizens?

The government must meet the housing needs of Arab communities. I have proposed a two-year moratorium on demolishing illegally built homes, together with a public campaign to discourage illegal building. During that time, the state should create municipal plans for every Arab city and town and ensure that there is proper accommodation for expected growth.

This plan has the support of both relevant ministries. But Mr. Netanyahu is ignoring it, just as he ignores our proposal to recognize the Arab villages of the Naqab.

Treating the Arab population as an enemy within is racist in itself, but it is also a political maneuver. Mr. Netanyahu knows that his opponents on the left will not regain power without cooperating with Arab parties. The opposition Labor Party knows this, too. But instead of acting with integrity, Labor has mimicked Mr. Netanyahu’s strategy, treating us not as valued allies but as untouchables.

The very existence of unrecognized villages is perhaps the most blatant example of the government’s cruelty toward its Arab citizens. There is room enough for all of us, in the Naqab and throughout the state. In this moment, it is our moral responsibility to build a principled opposition strong enough to overpower the politics of hate and fear. I will continue to work toward a just and democratic shared future.