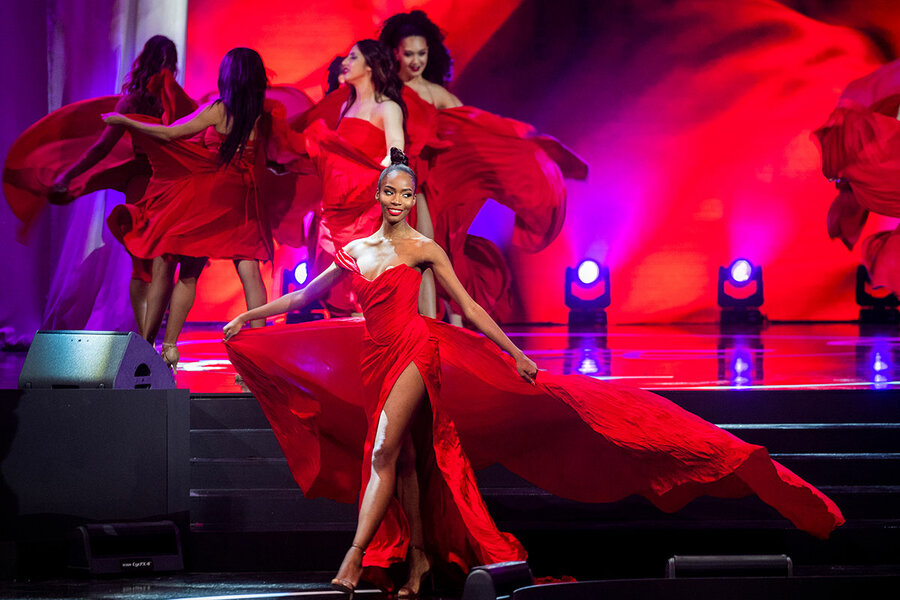 JOHANNESBURG — When Lalela Mswane glided across a Cape Town stage in a red satin ball gown at the finals of the Miss South Africa pageant in October, she moved with the poise of someone who commanded her country’s attention.

But in the days after the 24-year-old law student and model was crowned, that gaze took on a sharp edge.

Pro-Palestine activists began demanding she boycott the Dec. 12 Miss Universe pageant because it will be held in Israel. In mid-November, the South African government withdrew its support for Ms. Mswane’s entry, so she will compete without her country’s backing.

“The atrocities committed by Israel against Palestinians are well documented and Government, as the legitimate representative of the people of South Africa, cannot in good conscience associate itself with such,” wrote the Department of Sports, Arts, and Culture in a statement. The pageant organizers, meanwhile, soldiered on, stating that Ms. Mswane “would not be bullied” into boycotting the pageant. (The Miss South Africa organization and Ms. Mswane did not respond to requests for comments for this story.)

The Miss Universe competition may seem an unusual place for a government to stake a major geopolitical stand. But in South Africa, activists say the anti-apartheid movement taught them that the struggle against injustice takes place everywhere, from parliamentary debates and mass marches to boycotts of sports games, grapefruits, and yes, even the stage of a beauty pageant.

“It was not our wisdom and strength as South Africans that ultimately delivered us from apartheid – it was the support we had from the international community that backed us up,” says Duduzile Mahlangu-Masango, a board member of Africa4Palestine, formerly known as the Boycott Divestment Sanctions (BDS) movement, which advocates in support of Palestinian rights in South Africa. “We learned then that when you speak the big language of politics, you don’t bring everyone along. But when you talk about things ordinary people care about, you bring the issue closer to them.”

For those like Ms. Mahlangu-Masango, that kind of activism has a long history. For decades, boycotts and cultural isolation were a major weapon in the war against apartheid.

In the 1960s and ‘70s, activists fought to have South Africa barred from major sporting events like the Olympics and World Cup, and advocated for Europeans and Americans to stop buying South African fruit and cigarettes. The liberation movement asked international musicians to boycott South Africa.

In 1976, after a massacre of schoolchildren in Soweto, near Johannesburg, turned the world’s attention to South Africa’s atrocities, nine countries announced they would boycott the Miss World pageant for allowing South Africa to participate. A second boycott followed the next year, forcing the organizers to ban South Africa.

“These calls to isolate South Africa culturally were very important” because they reinforced the country’s exclusion from the global community, says Ottilia Maunganidze, head of special projects at the Institute for Security Studies, a South African think tank.

Fast forward 45 years and activists are using the same arsenal of tools to try to isolate Israel, she says.

The calls for Ms. Mswane to boycott Miss Universe started almost as soon as the crown was placed on her head in mid-October. Activists staged a protest at the Miss South Africa offices in Johannesburg, and the hashtag #NotMyMissSA began trending on social media. Its supporters, including Nelson Mandela’s grandson, Zwelivelile “Mandla” Mandela, called on the beauty queen to draw parallels between Israel’s occupation of Palestinian lands and the dispossession and violence committed against Black South Africans under apartheid. 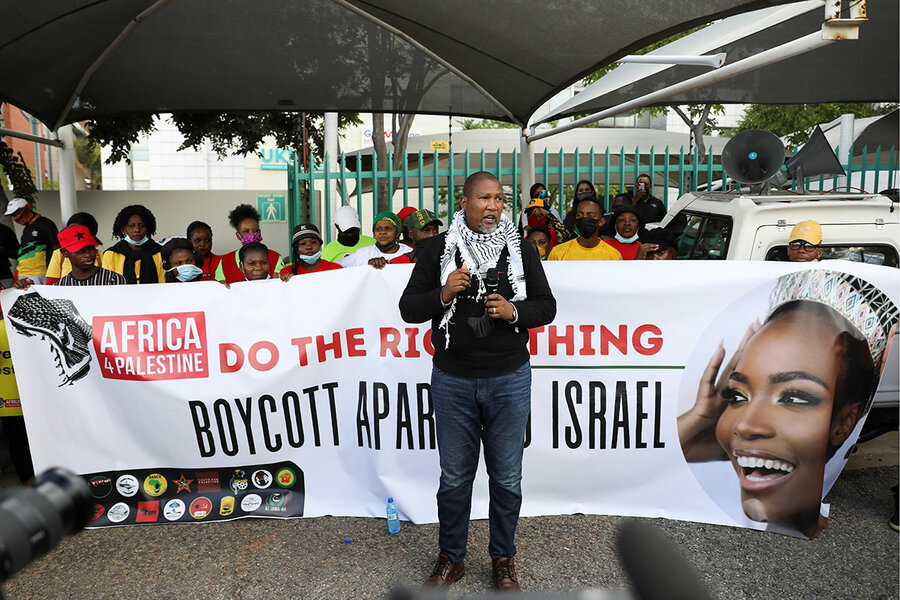 Zwelivelile Mandela, Nelson Mandela’s eldest grandson, speaks during a protest calling for Lalela Mswane to withdraw from the Miss Universe pageant, outside the Miss South Africa headquarters in Johannesburg, Nov. 19, 2021. Many South Africans draw parallels between their own history of apartheid and Israeli treatment of Palestinians. (Siphiwe Sibeko/Reuters)

“We must persist in isolating Apartheid Israel in the same way that we isolated Apartheid South Africa,” wrote Mr. Mandela on Instagram.

For many former anti-apartheid activists, including those now in government here, the question of Israel and Palestine is a particularly evocative one because it calls up vivid memories of their own history.

“The first time I set foot in Palestine, it was like setting foot into the world I grew up in,” says Ms. Mahlangu-Masango, who was raised during the dying years of apartheid in the 1970s and ‘80s. “I really cannot understand a South African who chooses to forget the history of where we come from.”

For supporters of Ms. Mswane, however, the anger at her misses the mark.

“Lalela will be a role model to young women – not just across the country, but across the African continent,” wrote Stephanie Weil, CEO of the Miss South Africa organization, in a statement on Instagram. “Anyone who wants to rob Lalela of her moment in the spotlight is unkind and short-sighted.” Ms. Mswane herself has not spoken publicly about the controversy over her competing.

Meanwhile, former Greek delegate Rafaela Plastira announced on social media in November that she would boycott the competition in support of Palestinians. (Several days later, the organization in charge of Miss Greece distanced themselves from Ms. Plastira and stated that she was not their delegate.)

“Humanity ABOVE beauty pageants!” she wrote in an Instagram post. Greece is sending Sofia Arapogianni to Israel as the country’s delegate.

“There have been arguments that you shouldn’t politicize a beauty pageant,” says Ms. Maunganidze of the Institute for Security Studies. “But the very act of hosting it in Israel is an act of politicization. For many people, it legitimizes what Israel is doing in Palestine. Or at the very least, it says, let life go on.”

An earlier version of this story omitted to mention controversy that has emerged about the candidacy of Greek beauty queen Rafaela Plastira.