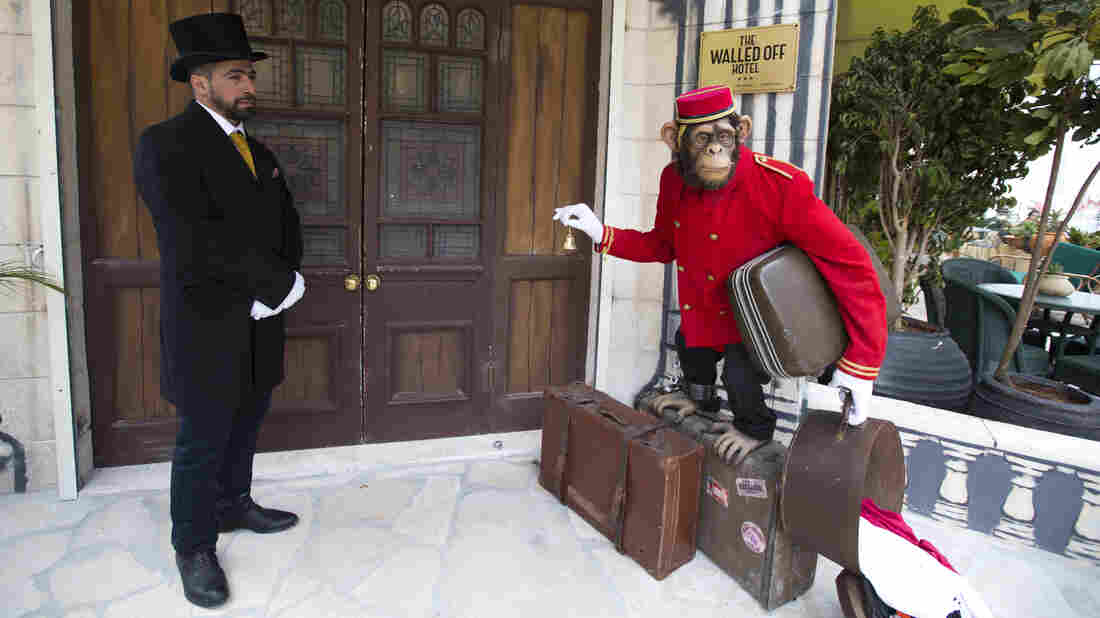 A doorman stands at the entrance of The Walled Off Hotel in the West Bank city of Bethlehem Friday. Dusan Vranic/AP

There’s no pool, but there is a piano bar that exudes “an air of undeserved authority.” That’s part of the promise at The Walled Off Hotel, the artist Banksy’s vision of a hotel along the wall Israel built in the occupied West Bank.

The project blends Banksy’s trademark style — a trickster’s eye for trompe l’oeil and a political cartoonist’s ear for satire — into more traditional hotel amenities such as food, drinks and well-appointed rooms. The hotel will begin taking reservations on March 11.

Just don’t call it the Waldorf. For a hint of what awaits visitors to the small hotel in Bethlehem, consider this description of the piano bar inside: The Walled Off Hotel, which offers what it calls the “worst view in the world,” has rooms that look onto an Israeli security barrier in the West Bank city of Bethlehem. Dusan Vranic/AP

“Guests can peruse a collection of Banksy artworks that include vandalized oil paintings and statues choking on tear gas fumes. Warm scones and freshly brewed tea are served daily on fine bone china and the Walled Off Salad should not be missed.”

That’s from Banksy’s website, which adds that the engagement is open-ended: “We’re aiming to be here for the whole of the centenary year, maybe longer if people come.”

The piano bar is a nod to Britain’s history in the area: Banksy timed the hotel’s opening to coincide with the centennial of the U.K.’s declaration of its support for creating “in Palestine a national home for the Jewish people,” as the famous Balfour Declaration stated in 1917. 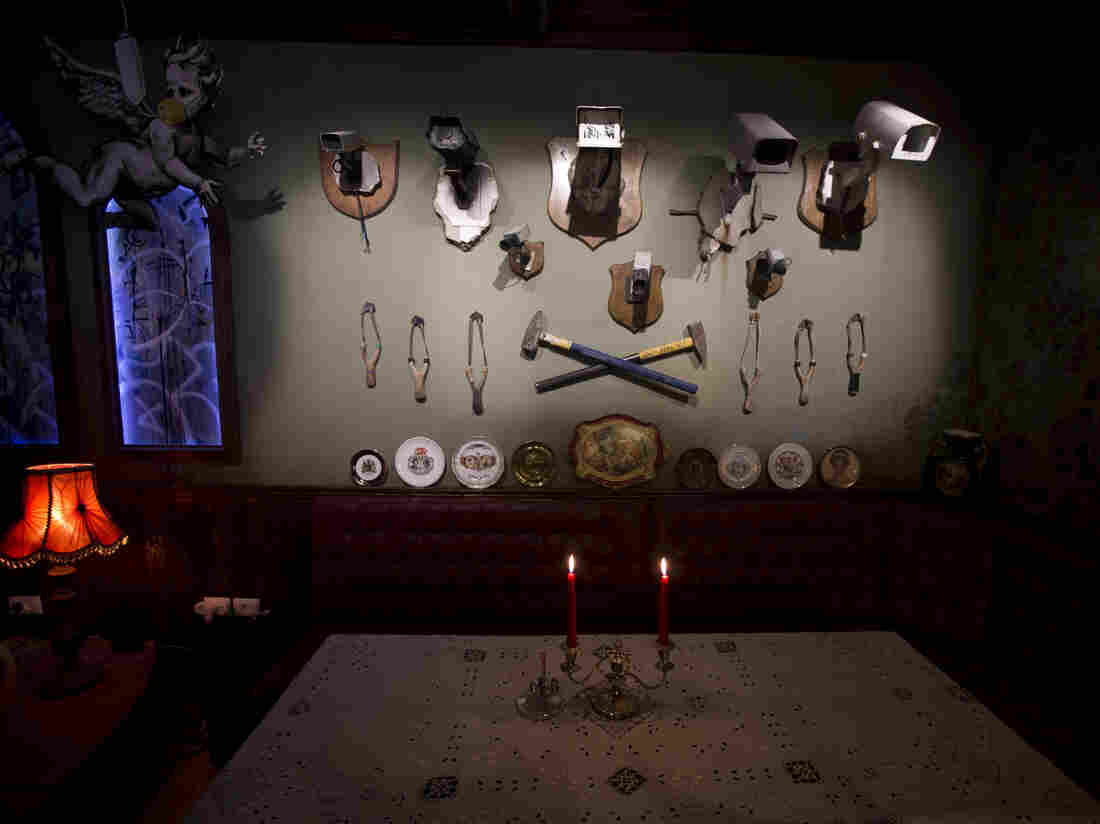 Security cameras and slingshots decorate the bar area of The Walled Off Hotel in the West Bank city of Bethlehem. Dusan Vranic/AP

The art installation seeks to simultaneously address and occupy a highly controversial topic. Here’s how the artist explains its broader goals:

“The Walled Off Hotel is an entirely independent leisure facility set up and financed by Banksy. It is not aligned to any political movement or pressure group. The aim is to tell the story of the wall from every side and give visitors the opportunity to discover it for themselves. We offer an especially warm welcome to young Israelis.”

The hotel is being unveiled two years after Banksy’s work popped up in the Gaza Strip, in a project that also included a video of life in the Palestinian territory. 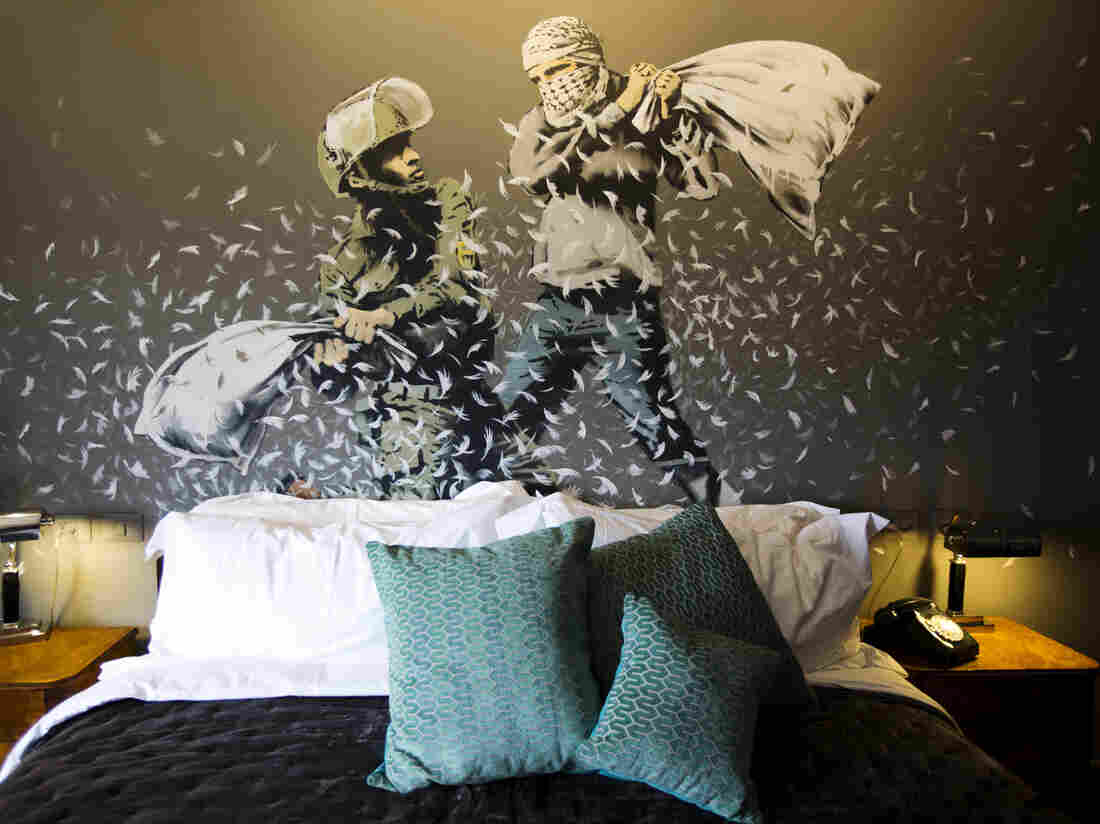 An Israeli border policeman and a Palestinian engage in a pillow fight in one of the rooms of Banksy’s The Walled Off Hotel. Dusan Vranic/AP

The large-scale hotel project, which touts the “worst view in the world,” comes on the heels of Dismaland, the artist’s so-called bemusement park that promised to be the U.K.’s most disappointing tourist attraction in 2015.

The chance to stay at The Walled Off comes with some requirements. No one is allowed on the roof, for instance. There’s also this caveat: “Absolutely no fanaticism is permitted on the premises.”

Other rules are aimed at keeping the hotel’s art on its walls. Staying in a room, for instance, will require a $1,000 deposit.

“The artwork here has been donated to the community and their struggle,” the artist says online, “and any person found attempting to steal from them, or deface hotel property, will be arrested, transported to the police station in Ramallah and prosecuted to the full extent of local law.” 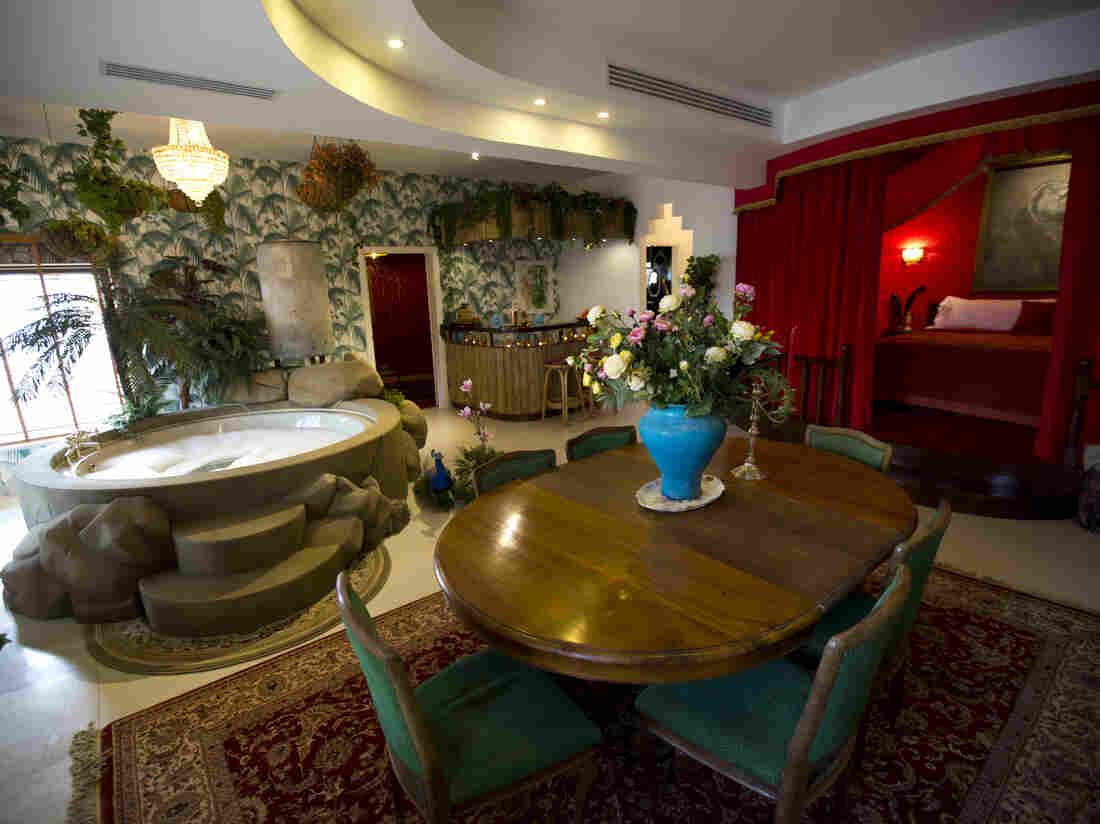 The presidential suite of The Walled Off Hotel is seen in a guesthouse that’s now packed with the elusive artist Banksy’s work. Dusan Vranic/AP

The facility has fewer than a dozen rooms; while some of them feature Banksy’s signature mural work, others were customized by artists such as Sami Musa and Dominique Petrin.

Unlike some of the artist’s more surreptitious public work — Banksy has thrilled fans and mystified others by mounting complex works in public spaces, usually without notice — the hotel offers a private experience of the artist’s work, along with an opening party. That’s slated for Saturday, March 4; it will include both Elton John and Ramzi Shomali, a Palestinian pianist.

Alongside its promotion for special events at the hotel, Banksy’s website quotes the writer Aldous Huxley: “To travel is to discover that everyone is wrong about other countries.”