America must be consistent. It cannot pick and choose when to follow international law. 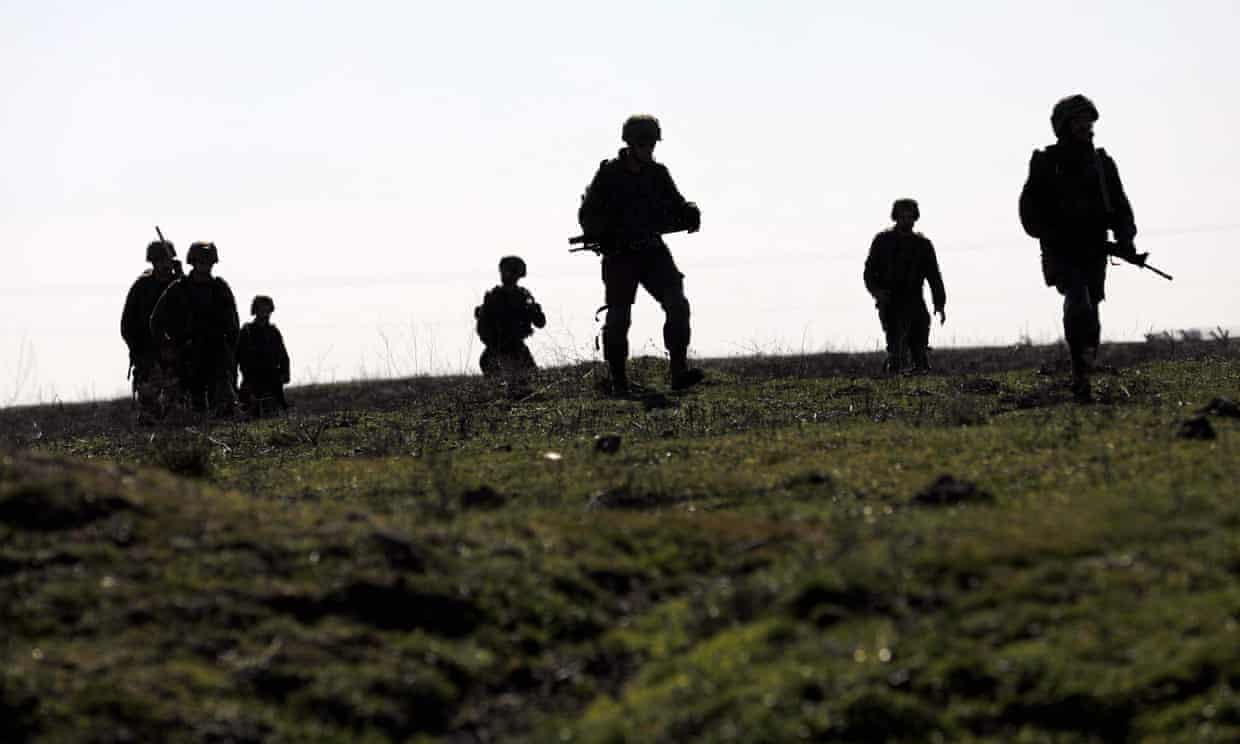 Israeli soldiers walk near Moshav Sha'al in the Israeli-annexed Golan Heights on February 9, 2022. (Photo by JALAA MAREY/AFP via Getty Images)

Last December, as Russian forces encircled Ukraine, the Biden administration and its allies delivered a stark warning to Vladimir Putin: “Any use of force to change borders is strictly prohibited under international law.” In January, as Russian troops massed even in even greater numbers, Secretary of State Antony Blinken added that “the inviolability of frontiers” was among the “guiding principles for international behavior.” Last month, after Russia’s parliament recognized the independence of two self-declared republics Moscow had cleaved from eastern Ukraine, Blinken called this infringement upon “Ukraine’s sovereignty and territorial integrity” a “gross violation of international law.”

All this is indisputably true. Remaking borders by force violates a core principle of international law. Which is why the Biden administration must do more than resist Russia’s aggression in Ukraine. It must stop violating that principle itself.

In 2019, the Trump administration made the United States the only foreign country to recognize Israel’s annexation of the Golan Heights, which Israel seized from Syria in the 1967 War. Tel Aviv University Law Professor Eliav Lieblich noted that the decision – which contradicted a unanimous United Nations Security Council resolution supported by the US itself – constituted a “significant departure from the bedrock legal prohibition of unilateral annexation.” Yale Law School’s Oona Hathaway called the move “outrageous and potentially destabilizing to the postwar international order.” The Russian government called it an “indication of the contempt that Washington shows for the norms of international law.”

After Trump’s move, Illinois Senator Richard Durbin asked Secretary of State Mike Pompeo to explain the legal difference between Israel’s annexation of the Golan and Moscow’s 2014 annexation of Crimea, which had led the US to impose sanctions. Pompeo replied that “there’s international law doctrine on this very point. We don’t have time to begin to go through it today. But [I’m] happy to have a team go over and walk you through that.” When journalists followed up, the State Department cited no international law doctrine at all. To the contrary, a department spokeswoman declared, nonsensically, that “The US policy continues to be that no country can change the borders of another by force.”

Then, in 2020, the Trump administration followed up by making the United States the only foreign country to recognize Morocco’s annexation of Western Sahara, a territory Morocco invaded in 1975 after the territory’s Spanish colonial rulers withdrew. Former Secretary of State James Baker III called the decision an “astounding retreat from the principles of international law.” Once again, the United States contradicted Security Council resolutions it had supported itself. Once again, Russia blasted the US for transgressing a “universally recognized international legal” principle.

Since taking office, the Biden administration has reversed neither of these Trump decisions. To the contrary, the US continues to provide Israel almost $4 billion in military aid per year absent any human rights conditions even as Human Rights Watch and Amnesty International allege that it is practicing apartheid. The Biden administration has also boosted arms sales to Morocco even though the US-based democracy watchdog Freedom House reports that people in Western Sahara enjoy fewer freedoms than people in China or Iran.

Russia’s full-scale invasion of Ukraine gives the Biden administration a chance to reconsider this dangerous path. It can harness the current global revulsion against Putin’s aggression to rebuild the principle that no country should redraw another’s borders by force. But only if it reverses Trump’s decisions and proves that the US is willing to live by the standards it demands of Moscow. Politically, that won’t be easy since Israel, which enjoys strong support in Washington, benefitted from both of Trump’s decisions—his decision on the Golan Heights and his decision on Western Sahara, which helped convince Morocco to normalize diplomatic relations with the Jewish state. But international norms only remain strong if countries abide by them when they’re inconvenient. And if the US chooses continued hypocrisy, it will make Ukraine, Taiwan and every other weaker nation bordered by a rapacious neighbor more vulnerable.

After Secretary of State Pompeo defended Trump’s recognition of Israel’s annexation of the Golan Heights, Senator Durbin warned that, “I don’t think the administration is thinking clearly about how this ends well.” He was right. The continued erosion of the norm against international aggression will not end well. Russia’s attack on Ukraine is just the latest sign. The Biden administration can stem that erosion now. But in addition to the military battle it is assisting in Ukraine, it must wage a political battle at home.