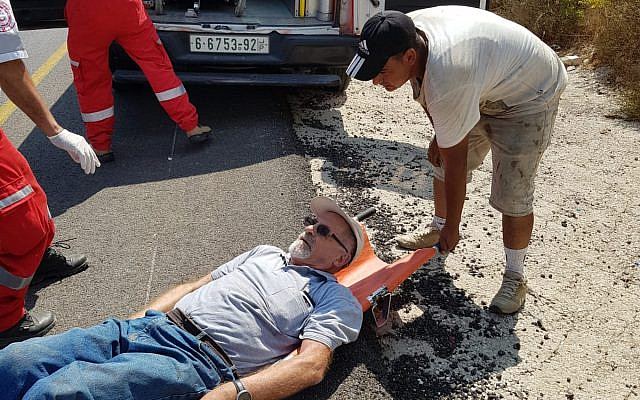 An 80-year-old Israeli activist said he “feared for his life” on Wednesday when a group of masked settler youth armed with crowbars charged at him and a group of largely foreign volunteers assisting Palestinian farmers with the annual olive harvest in the northern West Bank.

Rabbi Moshe Yehudai made the comments to Army Radio hours after he and fellow volunteers endured a brutal assault documented by rights groups at the scene.

Of the five volunteers who were injured, four were visiting from the US, UK and other European countries, said a field worker for the Yesh Din NGO. Yehudai, an Israeli activist from Rabbis for Human Rights, was the fifth person targeted, suffering blows to the arm and head. He was evacuated to the Meir Medical Center in Kfar Saba with a broken arm.

Rabbis for Human Rights recruits Israeli and foreign volunteers to accompany Palestinians, who say they face regular intimidation and violence while tending to crops located near settlements throughout the West Bank.

On Wednesday morning, roughly ten volunteers were assisting Palestinian farmers from the villages of Burin and Haware when a group of over 30 masked settlers descended from Yitzhar, a settlement identified by the Israeli security establishment as a hotbed for extremism, according to a Yesh Din field worker.

The Yesh Din field worker who spoke to The Times of Israel said that he arrived at the scene shortly after the assault began. After an IDF jeep was seen from a distance making its way to the field, the settler youth ignited a brushfire and retreated toward Yitzhar. At which point, the army vehicle turned around, the NGO staffer said.

Firefighter planes were dispatched to the scene to put out the fire which burned down hundreds of olive trees, some decades old, according to Yesh Din.

An IDF spokeswoman said she was looking into the incident, but was unable to provide any additional information. 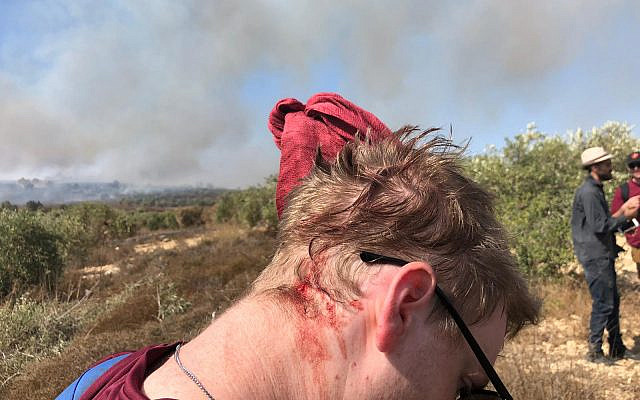 A Yesh Din volunteer with wounds sustained during an altercation with settlers int he West Bank on October 16, 2019. (Courtesy Yesh Din/Lexie Botzum)

The foreign volunteers filed a report at a nearby police station in the settlement of Ariel, but a spokeswoman for law enforcement could not provide any details on whether an investigation had been opened.

A statement from Yitzhar settlement later Wednesday blamed the incident on “provocations caused by extreme-left activists,” who together with Palestinian approached the settlement, which the statement said created “a security hazard.”

Speaking from the Palestinian Red Crescent ambulance that tended to his injuries near the scene of the assault, Yehudai recalled assisting the Palestinian farmers with the other volunteers when the settlers charged at them.

“Suddenly, the settlers came with their faces [covered]. They started running at us, they surrounded me, threw rocks at me, hit me with crowbars, giving me a head injury,” he said.

“I told them I’m 80-years-old. Leave me alone,” he added, lamenting that the assailants refused to do so.

The incident came as the annual olive harvest was just beginning. More than 100,000 Palestinian families rely to some extent on the income they generate from their olives and some 18 percent of Palestinian agricultural production comes from olives, according to statistics from the United Nations Office for the Coordination of Humanitarian Affairs.

The harvest is a frequent site of clashes between Palestinians and Israeli settlers that the Israel Defense Forces says it seeks to prevent.

Hilltop youth settlers attacked Palestinians, members of ATL, and @rhreng today during the olive harvest. Palestinians with olive groves and other lands in Area C face threats of settler and military violence, but the olive harvest is still ongoing. Photos by @LexieB2 pic.twitter.com/fZJWp59tDq

In many places, farmers say they face intimidation and violence from nearby extremist settlers and call in help from both foreign and Israeli supporters, including Jewish rabbis, to protect them and their crops.

Some of the incidents are seen as attempts at revenge following Palestinian attacks on Israelis, even if the farmers targeted were not involved.

In other cases, rights groups say, there is little motivation other than just to destroy Palestinian property.

Israeli settlers charge that their crops have also been damaged by Palestinians, including one incident in May 2018 when around 1,000 grapevines were destroyed.

Phrases daubed on cars and walls included: “When our brothers are being murdered, it is our obligation to not forget” and “The nation of Israel lives,” according to a Yesh Din field worker who arrived at the scene and provided photos of the damages.

Police said they were aware of the incident and were looking into the matter. 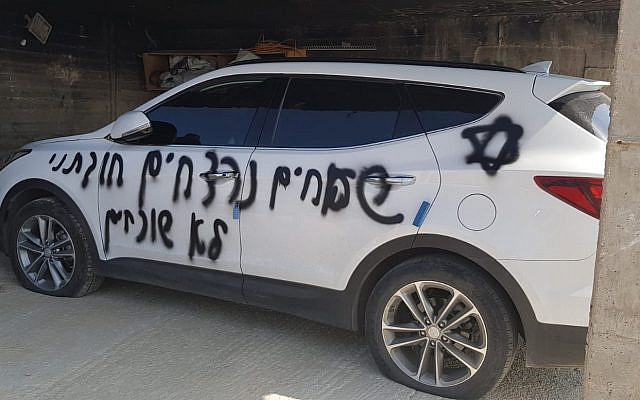 Last week, law enforcement opened an investigation after Palestinians in the northern West Bank village of Qira woke up to find 13 vehicles vandalized and Hebrew-language hate messages graffitied on walls throughout the town.

Among the phrases spray-painted in the town north of the Ariel settlement were “There is no room for enemies in Israel” and “When Jews are hurt, it is our obligation not to forget.”

Footage from security cameras in Qira caught several masked individuals walking through the village and slashing tires of a tractor and other vehicles in their path.

Abdullah Kamil, the Governor of the Salfit District in which Qira resides, told Haaretz that the Israeli government “bears responsibility for the crime and the repeated attacks by settlers.” 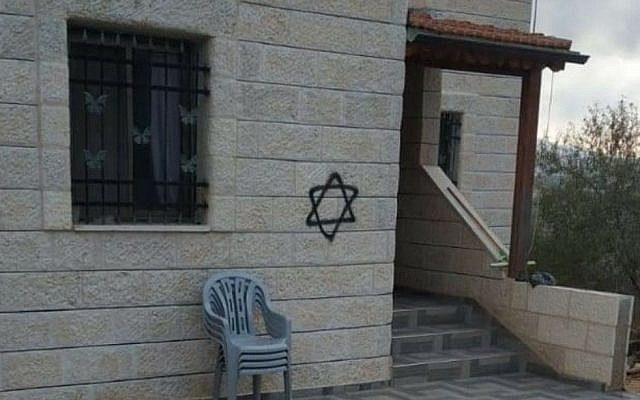 A Star of David spray-painted on the wall of a Palestinian home in Qira in an apparent price tag attack on October 6, 2019. (Ouhoud Khafash/Yesh/Din)

Despite the dozens of hate crimes targeting Palestinians and their property over the past year, few perpetrators are ever arrested or charged, according to rights groups.

The incidents, often referred to as price tag attacks, are usually limited to arson and graffiti, but have sometimes included physical assaults and even murder.

In December, the United Nations Office for the Coordination of Humanitarian Affairs released a report that showed a 69% increase in settler attacks on Palestinians in 2018 compared to 2017.

Additional video and photos are available on the pic.twitter.com links above.