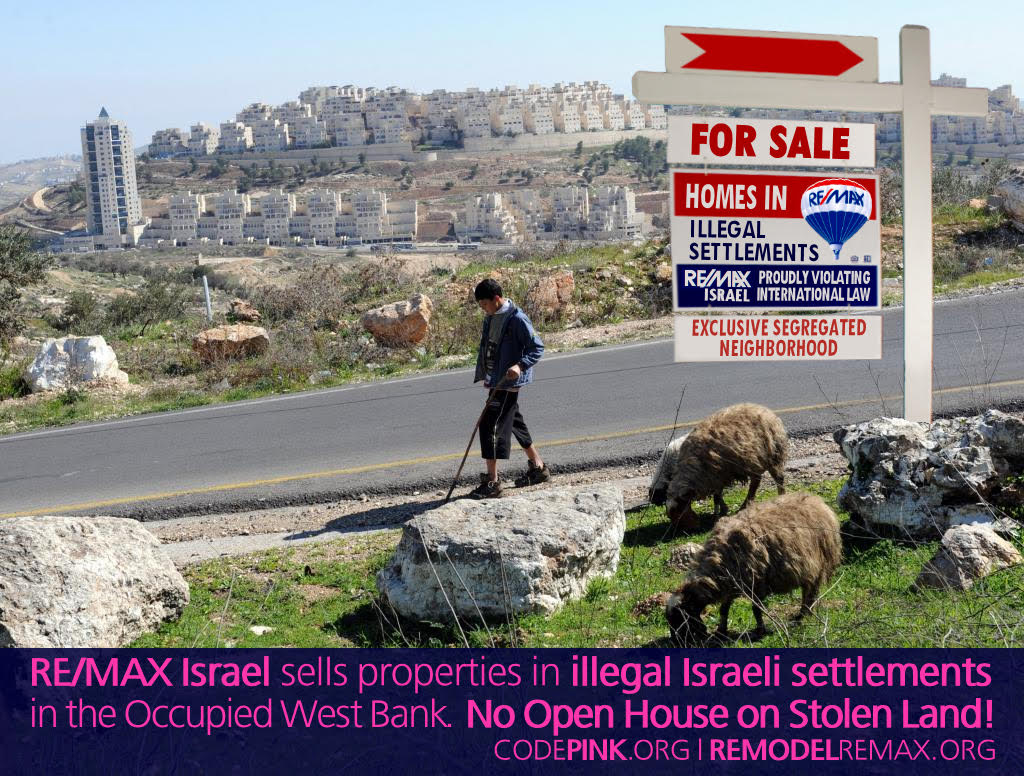 This weekend is the Presbyterian Church’s biannual General Assembly. Among the many social justice issues they will address is a resolution calling on real estate giant RE/MAX to stop facilitating property sales in illegal Israeli settlements.

In 2016, right before the last Presbyterian Church General Assembly, RE/MAX founder and then-CEO Dave Liniger announced that the company would stop receiving revenues from settlement properties. But they continue to allow their Israeli franchise to rent and sell settlement houses, and they continue to include settlement properties in their global database. With your help, this time we will succeed in getting RE/MAX to fully extricate themselves from Israel’s settlement enterprise. Add your name to the letter we are sending to current CEO Adam Contos at this year’s General Assembly!

There is no question about the illegality of Israeli settlements. They violate the Fourth Geneva Convention, which says that an occupying power may not move its people onto the land it is occupying. Numerous UN resolutions have been passed calling for Israel to stop settlement construction. Numerous reports from Human Rights Watch, Amnesty International, and others have been published citing the direct role settlements play in human rights abuses against Palestinians and calling on companies like RE/MAX to immediately cease all settlement business.

We have been protesting RE/MAX’s involvement in Israeli crimes since 2014. We have held rallies outside RE/MAX offices and at the RE/MAX, LLC headquarters in Denver. We have disrupted RE/MAX conventions and shareholder meetings. We know we are close to a win. Now, it is time for the final push. Join our letter to RE/MAX, LLC telling them to immediately remove settlement listings from their global database and end all complicity in Jewish-only Israeli settlements.

Towards freedom and equality in Palestine,
Ariel and everyone at CODEPINK