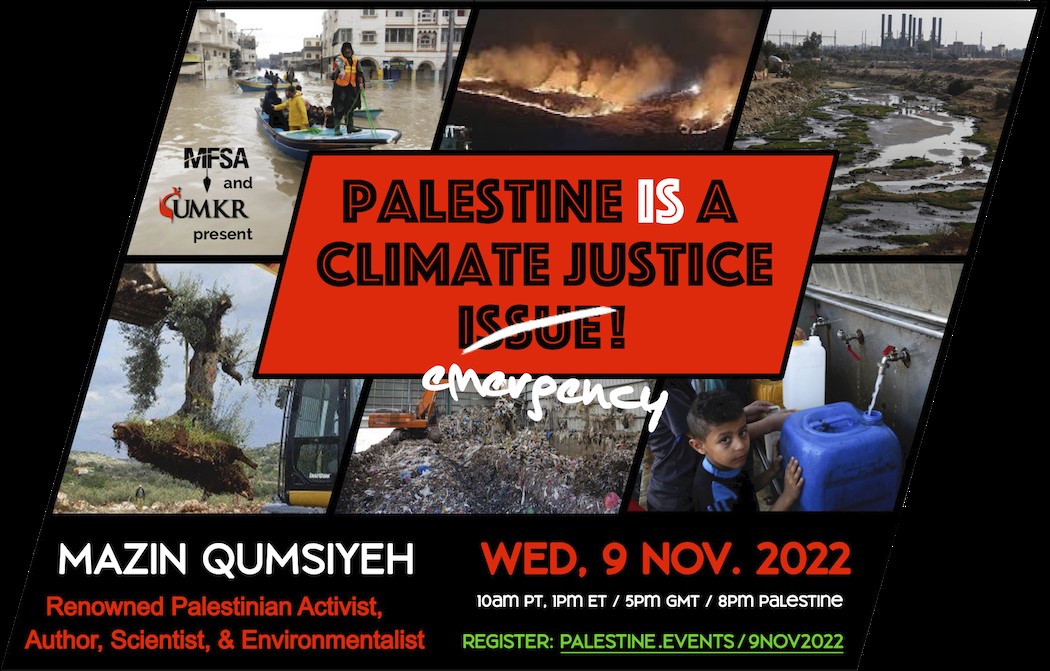 Join us to learn the environmental reality in Israel/Palestine today, what is being done by the land’s indigenous protectors. and what we can do to support their efforts.

We are honored to have one of Palestine’s leading voices on Palestinian activism and resistance, Mazin Qumsiyeh, an authority on the natural world of Palestine and environmental justice. Dr. Qumsiyeh is the founder and director of the Palestine Museum of Natural History and the Palestine Institute for Biodiversity and Sustainability at Bethlehem University.

The world’s climate and environmental crisis touches every corner of the globe.The most vulnerable and marginalized populations of the world are bearing the brunt of climate change and suffering daily environmental injustice. Nowhere is that more true than in Israel/Palestine. For Palestinians, climate change is not just a natural phenomenon, but a political one. Israel‘s regime of occupation and apartheid, which denies Palestinians the right to manage their land and resources, greatly heightens the impact of the climate crisis for Palestinians, making them more vulnerable to all climate-related conditions.

Yet Israel cultivates an image worldwide as an environmentally conscious, “green” society. It is even considered to be an environmental leader for the world. The reality is dramatically different.

He is also the author of several books, including Sharing The Land Of Canaan: Human Rights and the Israeli-Palestinian Struggle and Popular Resistance in Palestine: A History of Hope and Empowerment, and he has been called “the most important chronicler of contemporary popular resistance in Palestine.”

When we gather online with Mazin Qumsiyeh, representatives from around the world will be meeting in Egypt for the United Nations’ global climate conference, COP27. As we will see on November 9th, the fight for climate justice for all is directly connected to the Palestinian struggle.