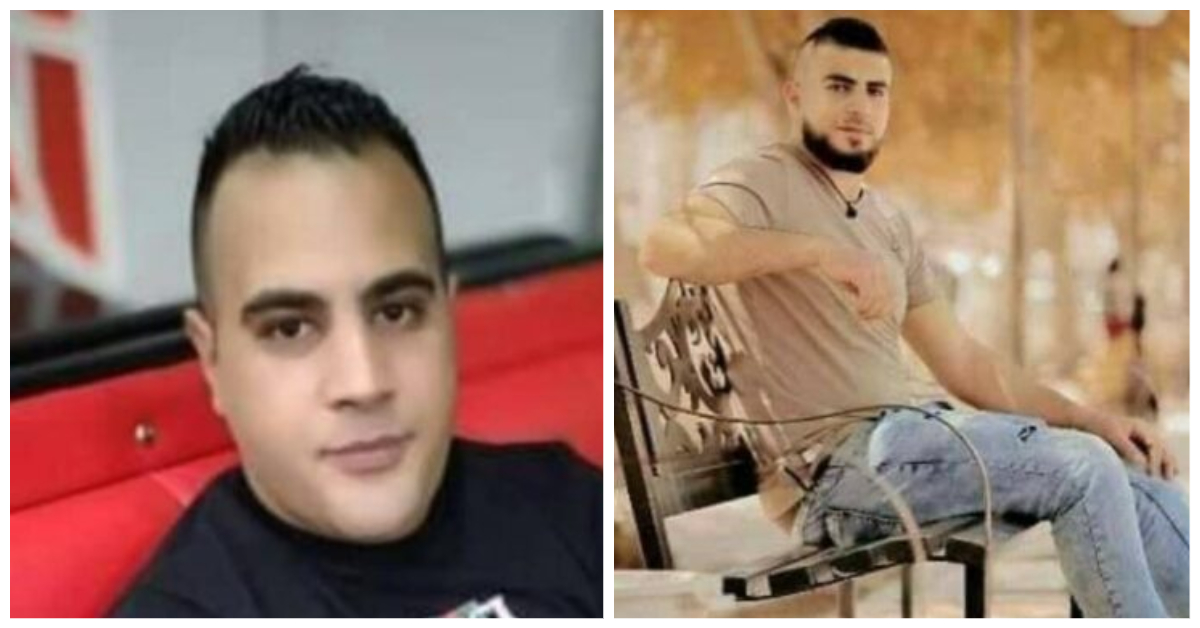 Invading Israeli forces have killed three Palestinians in 24 hours in separate incidents; a fourth died of wounds inflicted by Israel in May 2021.

Israeli forces also attacked the funeral procession for the young Palestinian woman killed, firing live bullets at mourners and tear gas directly into the crowd. At least one Palestinian was seriously wounded and being treated in hospital after being hit by a live bullet during the funeral.

Below are two reports on recent deaths of Palestinians at the hands of Israel.

Two Palestinians have been killed by Israeli forces in the occupied West Bank in separate incidents. [Another died in Egypt from wounds inflicted during Israel’s attack on Gaza in May 2021; a fourth died less than 24 hours ago.]

Ayman Mahmoud Mheisen, 29, was killed on Thursday morning during a pre-dawn Israeli military raid on the Dheisheh refugee camp in the southern city of Bethlehem, according to the Palestinian Ministry of Health.

Mheisen was the third Palestinian to be shot dead in the occupied West Bank in less than 24 hours. He was a father of three and a former prisoner who spent three years in Israeli jails, Palestinian prisoner rights groups said.

Separately, Israeli forces killed 24-year-old Bilal Awad Qabaha during a raid on the village of Yabad, outside of Jenin city in the northern West Bank late on Wednesday, the ministry said.

Qabaha was in a critical condition when he was transferred to a hospital in Jenin, where he died.

The army had raided Yabad in the evening to destroy the home of Diaa Hamarsheh, who carried out a shooting attack on March 29 in the town of Bnei Brak near Tel Aviv, killing five people. Hamarsheh was killed in a shoot-out with Israeli police at the scene.


[Translation: The moment the Diaa Hamarsheh family home was blown up in Yabad south of Jenin]

Israel destroys the homes of Palestinian assailants as part of a policy that has long been criticised by rights groups as collective punishment towards their families and towns.

Confrontations broke out with the Israeli army in Yabad shortly after the raid began, with several serious live ammunition injuries reported.

The Israeli army claimed she was in possession of a knife and had tried to stab soldiers, but witnesses told Al Jazeera that Warasneh, who was on the third day of a new job at a radio station, had posed little threat.

Israeli forces attacked Warasneh’s funeral procession at the camp on Wednesday, firing live bullets at mourners and tear gas directly into the crowd. At least one Palestinian was seriously wounded and being treated in hospital after being hit by a live bullet during the funeral.


[Translation: The martyr Ghufran Warasneh was about to begin a professional journey in one of the local radio stations. The occupation killed her and then attacked her funeral procession and her coffin, like it attacked many funerals before …]

Warasneh is the second Palestinian journalist to be killed by Israeli forces in less than a month.

On May 11, the Israeli army shot dead Al Jazeera correspondent Shireen Abu Akleh while she was covering a military raid in Jenin. Israeli forces also attacked her funeral procession in occupied East Jerusalem in an attempt to prevent it from advancing on foot. [NOTE: read more about Shireen Abu Akleh’s death and funeral here.]

According to the Palestinian Ministry of Health, Israeli forces have killed 61 Palestinians since January 1.

Local and international rights groups have condemned what they call Israel’s excessive use of force and “shoot-to-kill policy” against Palestinians, including suspected assailants, in the occupied West Bank and Gaza Strip.

Senior Israeli politicians – including Israeli Prime Minister Naftali Bennett – have encouraged the use of lethal force and given orders to shoot Palestinians who did not pose an imminent threat.

The United Nations Office of the High Commissioner for Human Rights has noted in reports that Israeli forces “often use firearms against Palestinians on mere suspicion or as a precautionary measure, in violation of international standards”.

A string of Palestinian attacks since March have killed 19 people in Israel.

Israeli forces increased the intensity of their raids, including in the Al-Aqsa Mosque compound in East Jerusalem. Hundreds of Palestinians were injured in raids conducted by Israeli forces and settlers at the compound during the Muslim holy month of Ramadan, and during Sunday’s Israeli far-right ‘Jerusalem Day’ parade in and around the Old City.

from IMEMC: on the death of Ayman Mahmoud Mheisin

On Thursday dawn, Israeli soldiers killed a young Palestinian man after the army invaded the Deheishe refugee camp, south of Bethlehem, in the occupied West Bank.

Dozens of soldiers invaded the refugee camp from several directions before storming and ransacking many homes, leading to protests.

The soldiers fired a barrage of live rounds, rubber-coated steel bullets, and gas bombs at the protesters and surrounding homes.

Medical sources have confirmed that an Israeli army sharpshooter occupying a rooftop of a Palestinian home killed a young man after shooting him with a live round in the heart.

The Palestinian was not participating in the protests and was walking near his home when the soldiers shot him.

Palestine TV said Aman’s father suffered a mild heart attack after hearing the news about his son’s killing and was rushed to a hospital in Bethlehem.

The invasion was initially conducted by undercover forces driving a car with Palestinian license plates before many army jeeps invaded the refugee camp.

The soldiers also shot another young man with a live round in the leg.

On Wednesday evening, a Palestinian man, who was seriously injured during the Israeli offensive on the Gaza Strip in May of 2021, died from his wounds at a hospital in Egypt.

The Health Ministry in Gaza identified the Palestinian as Yasser Atiya al-Masri, 41, from Deir al-Balah in the central Gaza Strip.

Also Wednesday evening, Israeli soldiers killed a young Palestinian man, Bilal Awad Kabaha, 24, after shooting him with live rounds in the chest and thigh, and injured at least six, including three who suffered serious wounds, during protests that took place after many army jeeps invaded Ya’bad town, southwest of Jenin, in the northern part of the occupied West Bank.

from IMEMC: on the death of Bilal Awad Kabaha

On Wednesday evening, Israeli soldiers killed a young Palestinian man and injured at least six, including three who suffered serious wounds, during protests that took place after many army jeeps invaded Ya’bad town, southwest of Jenin, in the northern part of the occupied West Bank.

Media sources said at least thirty military vehicles, including armored bulldozers, invaded the town before the soldiers stormed homes and occupied their rooftops to use them as firing posts and started to demolish a home.

The sources added that dozens of Palestinians protested the invasion and hurled stones at the soldiers who fired a barrage of live rounds, rubber-coated steel bullets, and gas bombs.

The Palestinian Health Ministry said the soldiers shot Bilal Awad Kabaha, 24, with live rounds in the chest and thigh.

It added that the young man was rushed to Jenin governmental hospital in critical condition but died from his wounds.

The Health Ministry stated that the army shot six Palestinians with live rounds, including three who suffered life-threatening wounds after being shot in the neck, face, and abdomen.

During the invasion, the army fired many gas bombs at homes and buildings, causing many Palestinians to suffer the effects of tear gas inhalation.

The invasion was conducted to demolish the home of Dia’ Hamarsha, 27, who was killed by an Israeli police officer, on March 30, 2022, after allegedly shooting to death five Israelis in a suburb of Tel Aviv.

from IMEMC: on the death of Yasser Atiya al-Masri

On Wednesday evening, a Palestinian man, who was seriously injured during the Israeli offensive on the Gaza Strip in May of 2021, died from his wounds at a hospital in Egypt.

The Health Ministry in Gaza identified the Palestinian as Yasser Atiya al-Masri, 41, from Deir al-Balah in the central Gaza Strip.

In an official statement, the Al-Quds Brigades, the armed wing of the Islamic Jihad, said Yasser was one of its members.

The Brigades stated that Yasser was seriously injured when the army fired missiles at him and other fighters in Deir al-Balah during the Israeli offensive on the coastal region.

The Israeli offensive on Gaza (May 10 – May 21, 2021) led to the death of 240 Palestinians, including sixty-five children, thirty-nine women, and seventeen elders. The Israeli missiles and shells also caused 1900 injuries, including 560 children, 380 women, and ninety-one elders.

For a complete list of Palestinians and Israelis killed since 2000, please visit Israel-Palestine Timeline

OTHER RECENT PALESTINIAN DEATHS AT THE HANDS OF ISRAEL: