Avigdor Lieberman, an ultranationalist, said that Army Radio should not have aired a show about Mahmoud Darwish, who is considered the Palestinians’ national poet 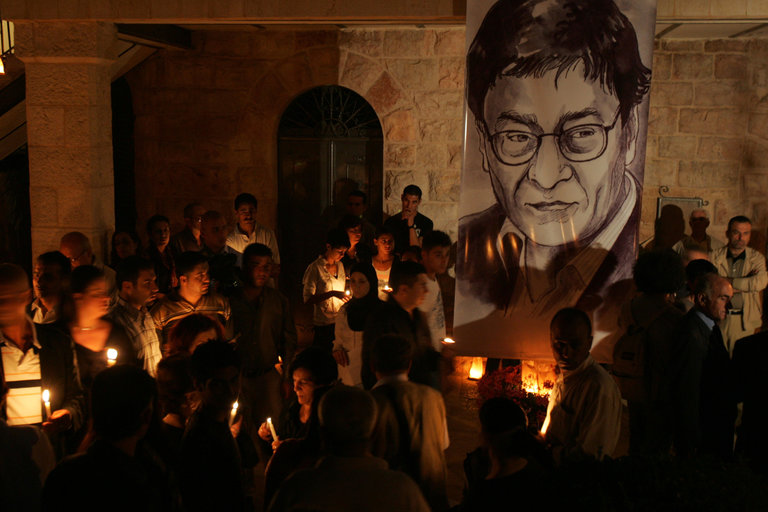 A memorial for the Palestinian poet Mahmoud Darwish in the West Bank city of Ramallah in 2008. He occupies a unique place among Palestinians: their national poet, beloved by politicians, academics and defiant youth. (Abbas Momani/Agence France-Presse — Getty Images)

Those Who Pass Between Fleeting Words
O those who pass between fleeting words
carry your names, and be gone
Rid our time of your hours, and be gone
Steal what you will from the blueness of the sea
And the sand of memory
Take what pictures you will, so that you understand
That which you never will:
How a stone from our land builds the ceiling of our sky.

From you steel and fire, from us our flesh
From you yet another tank, from us stones
From you teargas, from us rain…

So leave our country
Our land, our sea
Our wheat, our salt, our wounds
Everything, and leave
The memories of memory
those who pass between fleeting words!
Mahmoud Darwish

The controversy erupted after Army Radio, which has been under pressure from right-wing politicians to broadcast more patriotic programming, aired a show about the poetry of Mahmoud Darwish, a revered figure among Palestinians whose work is a staple of school curriculums and is showcased at a signature museum in the West Bank city of Ramallah. The Defense Ministry issued a statement on Thursday saying that Mr. Lieberman had excoriated the commander of the radio station over the show. The statement said that “according to this same logic,” it would be possible to “glorify during a broadcast the literary marvels of ‘Mein Kampf,’” Hitler’s autobiography.

Months after Israel’s conservative culture minister raised hackles by trying to adjust Army Radio’s playlist, Mr. Lieberman recently assigned a Defense Ministry official to make recommendations on whether the station should continue to operate. The left-leaning Israeli news organization Haaretz reported that Israel’s attorney general had phoned Mr. Lieberman on Wednesday night “to remind him he has no authority to intervene in Army Radio’s programming.”

Mr. Lieberman apparently took issue with the inclusion of Mr. Darwish’s work in a series on formative Israeli texts, and he told the commander, according to the ministry’s statement, that “the military station’s mission is to strengthen social solidarity and not to widen rifts, and certainly not to hurt public sensitivities.”

The statement also compared Mr. Darwish, who died in 2008, to the mufti of Jerusalem during World War II, Haj Amin al-Husseini. Last year, the Israeli prime minister, Benjamin Netanyahu, set off a furor when he asserted that Mr. Husseini had given Hitler the idea of annihilating European Jews. Mr. Netanyahu later retracted that assertion.

Mr. Lieberman’s statement on Thursday created its own backlash. “Wow — he is such a donkey, excuse my language,” said Ghassan Khatib, the vice president of Birzeit University outside Ramallah. “I don’t think he has ever read Mahmoud Darwish,” he added, suggesting that doing so is important for Israelis because he “presented in a very humanitarian way, in a very artistic way, the Palestinian narrative.”

Mr. Darwish occupies a unique place among Palestinians, beloved — and oft quoted — by politicians, academics and defiant youth. His writing has been described as “the easy impossible” for its appropriation of simple themes, elegantly strung together.

Yossi Klein Halevi, a senior fellow at the Shalom Hartman Institute in Jerusalem, said many Israeli Jews focus on a Darwish poem calling on Jews to leave Israel and take their dead with them, adding: “That’s where Lieberman’s unfortunate comparison is coming from.” 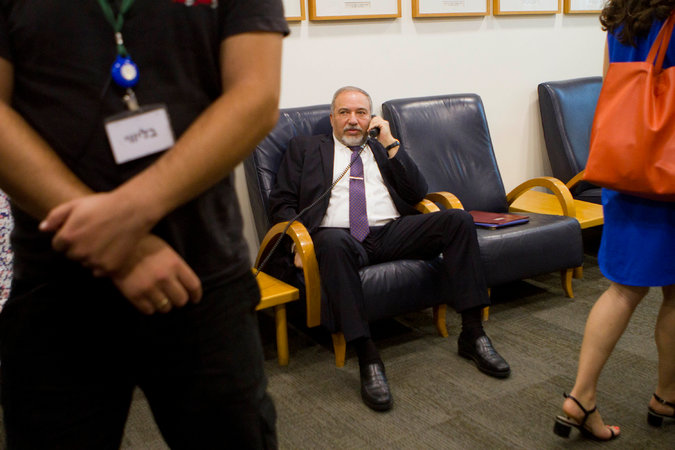 Mr. Klein Halevi said that many Israeli Jews feel angry that what he described as Palestinians’ “malevolent intentions” are ignored by the international community, but he was nonetheless critical of Mr. Lieberman’s statement. “Indulging in Holocaust rhetoric belongs to an earlier era of Israeli political discourse and reveals an anachronistic way of thinking that’s out of step with contemporary Israeli discourse,” he said.

Israel has long struggled with Mr. Darwish’s work. The Associated Press reported that in 2000, Israel’s education minister proposed including his poems in the curriculum of Jewish high schools, but the prime minister at the time, Ehud Barak, overruled him.

Another former prime minister, Yitzhak Shamir, read Mr. Darwish’s 1988 poem, “Those Who Pass Between Fleeting Words,” in Israel’s Parliament as an example of the Palestinians’ unwillingness to live alongside Jews.

“O those who pass between fleeting words,” it reads. “From you steel and fire, from us our flesh / From you yet another tank, from us stones / From you tear gas, from us rain.

But for Palestinians, Mr. Darwish is a muse and a hero. Fragments of his poetry are emblazoned on coffee mugs and baby onesies — and as graffiti on the concrete blocks of the Gaza port and West Bank refugee camps, particularly the defiant line, “We have on this land what makes life worth living.”

For an older generation, Mr. Darwish provided the lyrical inspiration for beloved songs by the Lebanese musician Marcel Khalife, including “Passport,” “Rita” and “My Mother,” which are still played on Palestinian radio in times of tension and conflict.

Mr. Khatib said that Palestinians in general are more familiar with Israeli Jewish culture than the reverse, after a half-century of occupation, even if they are hardly sympathetic to what is seen as the enemy narrative.

“The basic and initial requirement of coexistence,” he suggested, “should start from each side knowing and understanding the narratives of the other.”