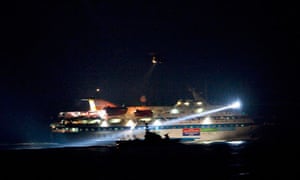 The activists from as many as 50 different countries stood little chance in the face of such a show of strength. But if Israel had been hoping to benefit from the cover of darkness by attacking at night, they did not reckon on the presence of a network of on-board video cameras recording their opening moves.

Turkish television footage showed how one by one as the commandos descended by ropes to the deck they were ambushed by waiting passengers armed with what appeared to be metal bars, sticks and in one case, a table. The reception for two commandos descending from a helicopter was brutal – the first was battered to the ground and heavily beaten and the second, landing seconds later, was assaulted by a man with a bar and forced to retreat into a doorway before fighting back out.

Whether these were the first blows struck in an incident that ended with the deaths of at least nine people and the injury of at least 50, is disputed. Those on board, including a reporter for Al Jazeera, said the Israelis fired on the boat before boarding. Israel said it opened fire after its commandos were attacked by activists wielding knives, clubs and pistols wrested from its soldiers. It was impossible yesterday to verify either account.

What is certainly true is that shortly after the assault, all communications with the flotilla were blocked. Mobile phones, satellite phones and internet access all went down, making it all but impossible to glean any account from the passengers about what had happened, beyond the few minutes that were captured on film. Israel’s version of events became the only one available in any detail.

During Sunday on the journey from Cyprus towards Gaza, the trip had been progressing well, with spirits high among the pro-Palestinian activists, according to messages received from the flotilla at the Cyprus base of Free Gaza, one of the campaign groups behind the mission.

“They were excited because they knew they were on their way,” Greta Berlin, a Free Gaza activist in Cyprus who was in frequent contact, said. “We would get little messages saying ‘we are on a Mediterranean cruise, it is really quite lovely’. There was no feeling until around midnight that anyone was in any danger.”

Little did they know that three hours earlier than that, at around 9pm, three Israeli naval craft had left the northern Israeli port of Haifa to intercept them. The plan was for Israel’s elite Flotilla 13 unit to disembark on the top deck of the Mavi Marmara, and from there rush to the vessel’s bridge and order the Marmara’s captain to stop, said Israeli journalist, Ron Ben Yishai, who was embedded with the Israeli military.

By around 11pm Israel’s taskforce was alongside the flotilla of six vessels and one of the navy ships broadcast a warning to the flotilla not to approach Gaza.

“If you ignore this order and enter the blockaded area, the Israeli navy will be forced to take all the necessary measures in order to enforce this blockade,” the message said, according to a recording later broadcast on Israeli radio.

Then around midnight the flotilla co-ordinators appeared to become worried and Lubna Masarwa, a Palestinian Israeli on board the Marmara issued a series of urgent messages via Twitter.

“We didn’t expect them now,” she said. “We thought they will arrive at the morning, please stay in touch with the other boats … People here put there life jackets [sic], everybody preparing here. We are in international waters … Three boats are coming, not two, Three Israeli boats, we are 78 mile from Israel … Two Israeli ships coming toward us … they contact the ship asked who we are and disappeared, getting close to the ship we can see them.”

The Free Gaza campaign was worried enough to issue “a call to the world from the people on the boats”. “This flotilla is bringing supplies the people of Gaza and are being met by military force,” it said.

Over the next few hours as the Israeli ships circled, the flotilla issued a series of brief messages through their spot locator, a telecommunications device which charted their progress on a web site.

“This is a HELP message,” it said at 12.30am. “We have been contacted by the Israelis but are still fine, don’t worry.”

Shortly afterwards another states: “Challenger 2 [one of the boats] contacted by Israeli Defence Force radio A/O approached by IDF ships”, and another: “Going ahead”. Three more “OK” signals between 1.30am and 2.30am were then replaced at 4.30am by a red exclamation mark stating: “Last position before IDF attack. 04:30 GMT, Latitude:32.64113, Longitude:33.56727” – around 70 miles from the coast of northern Israel and 90 miles from Gaza.

The assault had been under way for at least 30 minutes, according to Dr Arafat Madi, one of the European organisers of the convoy who spoke to the activists by satellite phone shortly afterwards.

“The Israelis took the phones from us as we were talking,” he said. “We heard from them that the Israeli army attacked all the ships at once with hundreds of soldiers.”

He said the Greek captain of one of the smaller vessels, the 8000, had been shot and two others were injured. But he had no information about injuries on the other vessels and said they were struggling to get any information from the Israelis to give to worried families of the activists.

Video footage of the assault on the Mavi Marmara showed at least half a dozen armed and masked commandos gathering themselves on the bow deck of the ship, apparently having been helicoptered on.

During the assault, which began in earnest 40 miles from the coast, several journalists continued to broadcast from the aft deck, sharing a microphone in a relay as they broadcast to the world.

Reporting for Press TV, an Iranian state-run channel, one said: “We are being hit by tear gas, stun grenades. We have navy ships on every side and helicopters ahead. We are being attacked on every side.”

Activists on the ship were shown on video mustering at the top of a flight of stairs, armed with makeshift weapons. The ship’s captain could be heard speaking over the tannoy, urging them to give up: “Please, all the brothers, go back to your cabin and sit on your seats. Stop your resistance. They are using live ammunition. We can’t protect ourselves.”

Over the noise of gunfire, Jamal Elshayyal, reporting for Al Jazeera, said two passengers had been killed. He claimed a white flag of surrender had been raised on board “after Israeli commandos descended upon the ship from a helicopter as well as surrounding it on all sides [in boats].” He continued: “Despite the white flag being raised, the Israeli army is still shooting, still firing live munitions.”

Shortly afterwards the broadcasts stopped and all internet and satellite phone connections were lost.

The Israeli military had been surprised by the resistance they met, according to an account by Ben Yishai. He said the commandos were carrying paintball rifles. He said they were equipped with handguns but were only authorised to use them in life-threatening situations.

“The navy commandos were prepared to mostly encounter political activists seeking to hold a protest, rather than trained street fighters,” he wrote on the Ynet News website. “The rioters on the top deck, whose number swelled up to 30 by that time, kept on beating up about 30 commandos who kept gliding their way one by one from the helicopter.”

He claimed activists stole a handgun from one commando and threw him 30 feet over a rail, causing serious head injuries. Only after this were commandos authorised to use live ammunition and then shot at activists’ legs, he said. He added that passengers pounded soldiers’ hands as they tried to climb on board.

Footage from inside the ship, broadcast on Turkish television, showed the impact of the battle. A woman carried a bloodstained stretcher, men were shown bleeding from wounds, people moved about tending the injured. People were stretched out on the floor and it was not clear if they were alive or dead.

Flotilla 13, the Israeli naval commando unit that intercepted the Gaza Freedom flotilla, is one of the country’s elite military formations, with rigorous selection and training procedures and a reputation for ruthless efficiency. It is known to have been involved in numerous clandestine seaborne operations, including many raids on neighbouring Lebanon. It works closely with the Mossad secret service.

It was also involved in a curious foreshadowing of the Gaza incident in February 1988, when Flotilla 13 is reported to have sabotaged an attempt by the PLO to highlight the issue of Palestinian refugees by sailing a ship to an Israeli port, forcing Israel either to sink it or board it or let it land the refugees. The night before the vessel, al-Awda (“The Return”) was due to sail, it was blown up and sunk in Limassol harbour, Cyprus — with no loss of life or political embarrassment.

In recent years the naval commando force has played a key role in intercepting arms shipments from Iran and Syria to Hamas in the Gaza Strip and Hizbullah in Lebanon. Flotilla 13 is often compared to the US Navy Seals and Britain’s Special Boat Service.