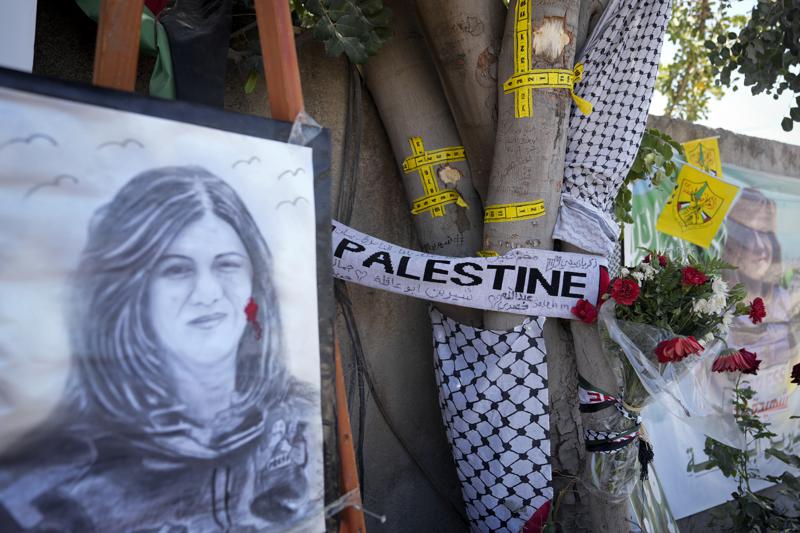 Yellow tape marks bullet holes on a tree and a portrait and flowers create a makeshift memorial at the site where Palestinian-American Al-Jazeera journalist Shireen Abu Akleh was shot and killed in the West Bank city of Jenin, May 19, 2022. The Israeli military acknowledged for the first time today that one of its soldiers likely killed Shireen Abu Akleh, saying its own investigation shows she was shot by mistake and that no one will face punishment. (AP Photo/Majdi Mohammed)

JERUSALEM (AP) — The Israeli military on Monday announced the long-awaited results of its investigation into the deadly shooting of Al Jazeera journalist Shireen Abu Akleh, saying there was a “high probability” an Israeli soldier had mistakenly killed her during a raid in the occupied West Bank last May.

It was the closest that Israel has come to accepting responsibility for the shooting. But in a report that seemed to raise as many questions as it sought to answer, the military revealed no new evidence to back its claim that the Palestinian-American journalist might have been killed by Palestinian gunmen during a battle with Israel troops and Palestinian gunmen. It also said that no one would be punished for the shooting.

The conclusions were unlikely to put to rest an issue that has worsened what already were badly strained relations between Israel and the Palestinians. Both Palestinian officials and Abu Akleh’s family accused the army of evading responsibility for her killing.

“Our family is not surprised by this outcome since it’s obvious to anyone that Israeli war criminals cannot investigate their own crimes. However, we remain deeply hurt, frustrated and disappointed,” her family said in a statement.

Abu Akleh, a 51-year-old Palestinian-American, was killed while covering an Israeli raid in the Jenin refugee camp in the northern West Bank on May 11. She had covered the West Bank for Al Jazeera for two decades and was a well-known face across the Arab world.

In a briefing with reporters, a senior Israeli military official said there was a “very high likelihood” that Abu Akleh was mistakenly shot by an Israeli soldier positioned inside an armored vehicle who thought he was aiming at a militant.

“He misidentified her,” the official said, speaking on condition of anonymity under military briefing guidelines. “His reports in real time… absolutely point to a misidentification.”

“We know that he fired, but it could very well be that this happened from other fire,” he added.

Jenin is known as a bastion of Palestinian militants, and Israel has carried out raids there almost nightly since a string of deadly attacks inside Israel earlier this year, some of which were carried out by assailants from the area.

Repeating previous Israeli claims, the military official said the soldiers had been under continuous fire for almost an hour from multiple directions before Abu Akleh was shot. The army released several videos showing Palestinian militants firing automatic weapons and soldiers coming under fire that day.

But the military provided no evidence to support its claim that a fierce gunbattle was under way at the time that Abu Akleh was shot. Amateur videos as well as witness accounts have shown no evidence of militants in the vicinity and the area appeared to be quiet for several minutes before she was shot.

It also was unclear how Abu Akleh, who was wearing a helmet and vest marked “press” at the time, could be mistaken for a militant. The official only said that the soldier’s vision from inside the vehicle was “very limited,” causing Abu Akleh to be misidentified in a split-second decision.

He said the findings of the investigation had been turned over to the chief military prosecutor, who was satisfied with them and decided against a criminal investigation. That means no one will be charged in her death.

Critics have long accused the military of doing a poor job of investigating wrongdoing by its troops. The Israeli human rights group B’Tselem accused the army of carrying out a “whitewash,” while Abu Akleh’s family and the Palestinian Authority both called for the case to be turned over to the International Criminal Court in the Hague. The ICC has opened an investigation into possible war crimes by Israel in both Gaza and the West Bank.

Nabil Abu Rdeneh, spokesman for Palestinian President Mahmoud Abbas, dismissed the announcement as “another Israeli attempt to evade responsibility for her killing.”

He said all evidence proves that “Israel is the culprit, that it killed Shireen, and it must be held responsible for its crime.”

The PA, Abu Akleh’s family and Al Jazeera have accused Israel of intentionally killing Abu Akleh, while a series of investigations by international media organizations, including The Associated Press, have found that Israeli troops most likely fired the fatal bullet. The United States concluded that an Israeli soldier likely killed her by mistake, but it did not explain how it reached that conclusion.

The Committee to Protect Journalists called the Israeli findings “late and incomplete.”

“They provided no name for Shireen Abu Akleh’s killer and no other information than his or her own testimony that the killing was a mistake,” said Sherif Mansour, the group’s Middle East and North Africa program coordinator. “That does not provide the answers — by any measure of transparency or accountability — that her family and colleagues deserve.”

The U.S. ambassador to Israel, Tom Nides, declined to comment when asked about the investigation at a news conference.

The AP reconstruction of Abu Akleh’s killing lent support to witness accounts that she was killed by Israeli forces. Subsequent investigations by CNN, the New York Times and the Washington Post reached similar conclusions, as did monitoring by the office of the U.N. human rights chief.

Abu Akleh rose to fame two decades ago during the second Palestinian intifada, or uprising, against Israeli rule. She documented the harsh realities of life under Israeli military rule — now well into its sixth decade with no end in sight — for viewers across the Arab world.

Israeli police drew widespread criticism from around the world when they beat mourners and pallbearers at her funeral in Jerusalem. An Israeli newspaper reported that a police investigation found wrongdoing by some of its officers, but said those who supervised the event will not be seriously punished.

Israel captured the West Bank in the 1967 Mideast war and has built settlements where nearly 500,000 Israelis live alongside nearly 3 million Palestinians. The Palestinians want the territory to form the main part of a future state.