Today, tech worker organizer Ariel Koren, active in our #NoTechForApartheid campaign, resigned from Google. Her resignation letter cited Google’s retaliation and the silencing of Palestinian, Muslim, Arab, Jewish, and other workers speaking up for Palestinian freedom at the company.

Make noise by sharing this huge moment in the No Tech for Apartheid campaign on Twitter and on Facebook. 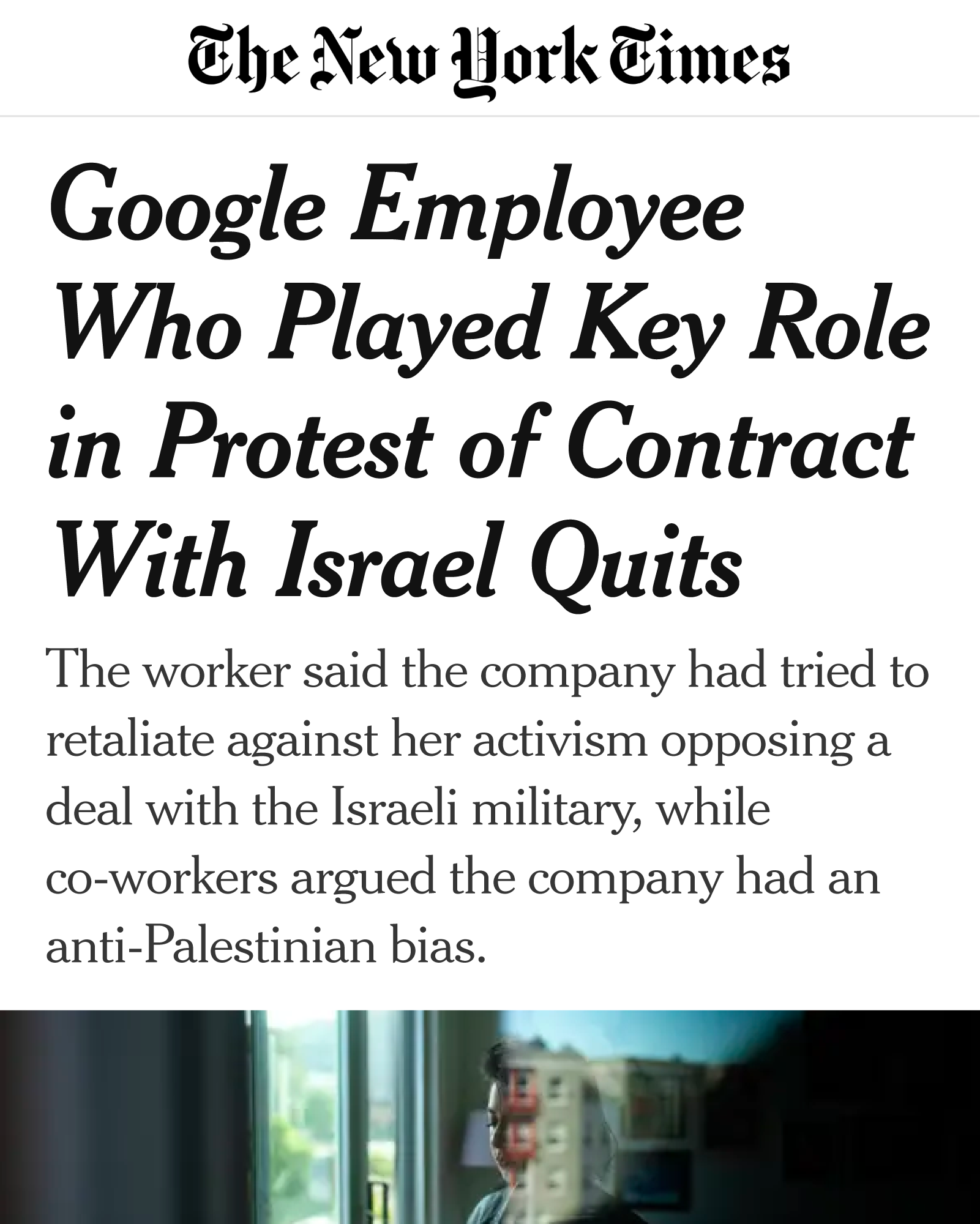 The New York Times spoke to workers like Ariel organizing against a $1 billion contract with the Israeli military and apartheid government that enables surveillance and violence against Palestinians.

For the first time, Palestinian workers at Google publicly described the retaliation they’ve faced: “Project Nimbus makes me feel like I am making my living off my family’s oppression,” one of them said. But if they speak out, they face retaliation and threats of termination from Google.1

Google and Amazon workers are organizing against corporate contracts that fuel Israeli apartheid and state violence, and our solidarity with these workers is a show of power that increases the pressure to cut these contracts.

Google is trying to silence workers to protect their business interests, but next week, we’re turning up the pressure in solidarity with tech workers by holding direct actions at Google and Amazon offices across the country.

If you live in San Francisco, Seattle, or New York City, RSVP here to join a No Tech For Apartheid action next Thursday, September 8th!

Tech worker organizing pressures Google and Amazon to end their contract with the Israeli military and government. Their divestment demands are clear: either stop harming Palestinians or face a devastating public relations and labor crisis.

As Ariel told the Times: “When Google and other folks retaliate against workers, it’s about creating a culture of fear. I think the opposite is true in this case — more workers took a stand.”

Amazon and Google want to believe they can get out of this by pushing workers out and creating a culture of fear to stifle worker organizing. Let’s make sure they know it’s not going to be that easy to avoid accountability.

Join us at a #NoTechForApartheid Day of Action next week, or if you don’t live in any of these key tech hubs, join us by making noise on social media today.

Thanks for all you do to further justice.

In solidarity,
Lau, Granate, Linda, and the MPower Change team