The text reads: Palestine, 1948. That’s all you need to know to understand what’s coming. A year earlier marked the start of the Palestinian Civil War between Jewish and Arab residents after the United Nations recommended the land’s separation in a Jewish and Arab state. Israel declared independence in May of 1948 and, as some history books describe it, a mass exodus arose to render about half the nation’s pre-WWII Arab population (700,000) into refugees without a home. To simply call it an exodus, however, is misleading. Most of these people didn’t choose to leave as a means of finding settlement elsewhere. They were driven out by Israeli military forces who in turn destroyed villages and murdered so-called “rebel forces” in an ethnic cleansing that continues today.

As anyone following the news knows, using the term genocide for what happened / is happening has always been a hotly disputed topic thanks to some people’s inability to separate anti-Zionism from anti-Semitism. And being that America is a huge Israeli ally, advocating for the lives and freedoms of a Palestinian people who had their land stolen from them—only to subsequently be treated like second-class citizens upon the land they were given (that was then also stolen despite agreements made)—is likely to get you labeled the latter. We’re accordingly taught to dismiss Palestinians as terrorists like many other Muslim groups. It’s thus important for Arab artists and historians to dare combat that stereotype by telling their stories too. Darin J. Sallam’s drama Farha is one.

In it she details the real-life tale of Radiyyeh, a 14-year-old girl whose village was destroyed during the Al-Nakba (Catastrophe). Names are changed and events dramatized, but it remains the same tale this young woman told upon reaching Syria that’s endured for generations. At its start is our introduction to the renamed Farha’s (Karam Taher) headstrong teenage rebellious streak in telling her Quran teacher that women should be worrying less about marriage and more about education. Her cousin / best friend Farida (Tala Gammoh) is lucky enough to live in the city to experience the latter while life in the village leaves Farha with many fewer options. Her father (Ashraf Barhom’s Abu Farha) is their mayor, however, and thus has means to send her too.

They’re living in tumultuous times, though. The British are leaving and the Arab villages have no means of defending themselves from the progressing Israeli forces coming to fill that void. On one hand Abu Farha wants his daughter to remain close as they await the Arab League’s promised assistance. On the other, he knows her potential and desire to learn could ultimately help them all in the long run. There just isn’t enough time to get affairs in order before the explosions start. Suddenly Farha is left with a choice of her own: flee with Farida’s family north or stay by her father’s side. Why she picks the latter comes with additional motivation, but it hardly matters once desperation leads her to being locked inside the pantry. 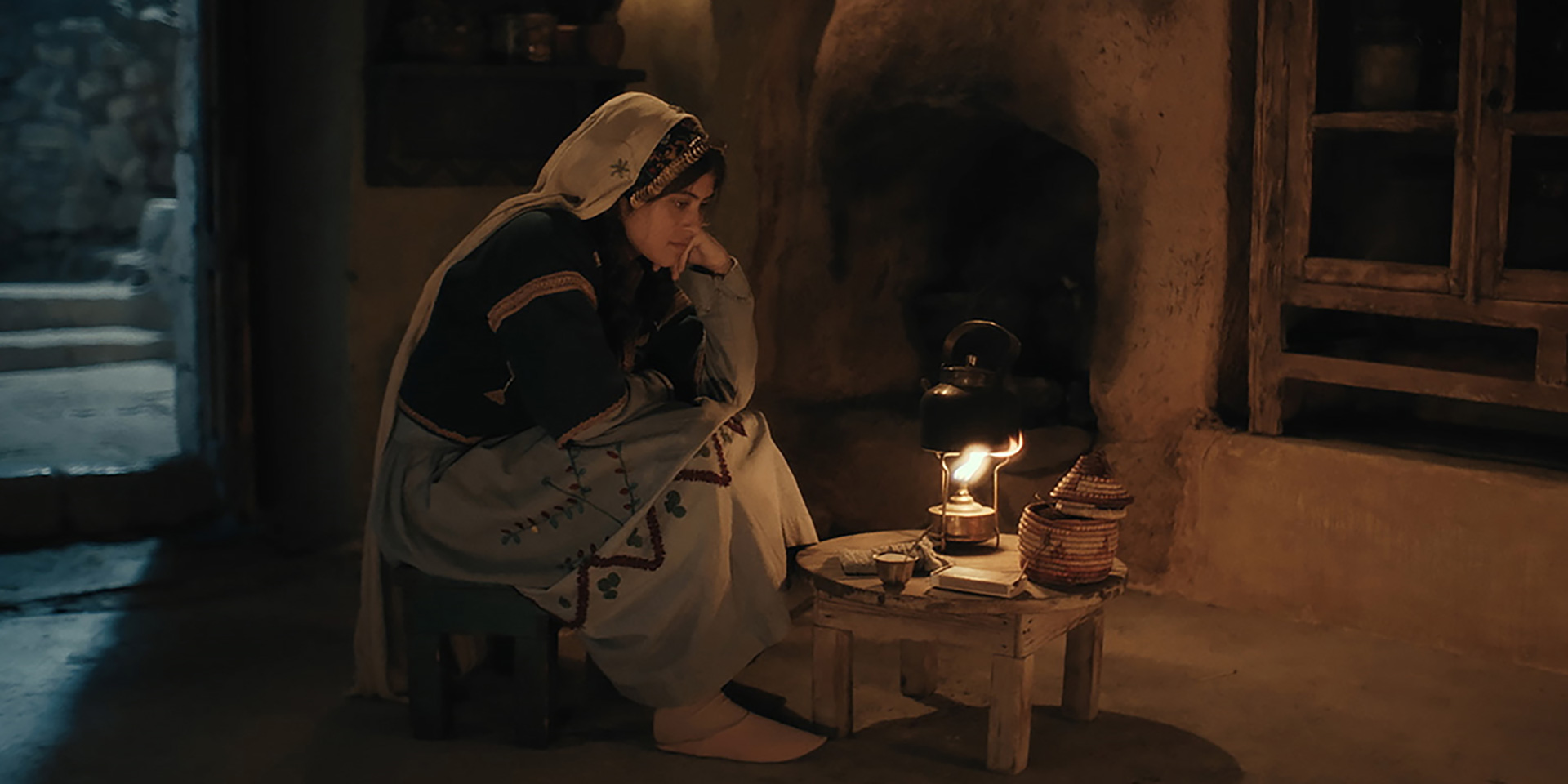 This is how we experience the horrors of what went on: through the cracks of a wooden door and gaps between stones. Abu Farha says he’ll return for her, but that’s hardly a guarantee. And while hiding in this room will keep her safe (and fed), the prospect of what she might have to face with only a dagger left behind for protection remains unknown. Sallam’s film turns from the hopeful sun-drenched days of a hillside community thinking towards the future to a claustrophobic thriller forcing Farha (and us) to helplessly watch the present depravity of war. Whether smoke from fires set to burn the village down or Israeli soldiers cornering fleeing Arabs with unprovoked malice, what she witnesses will invariably alter her entire outlook on humanity.

Sallam pulls no punches in her depictions of the callous nature of this endless battle in the Middle East. It’s no coincidence that she shows young boys chasing after the British with toy gun slingshots, propelling tiny stones at the soldiers before cutting to a scene between Abu Farha and his brother-in-law (Ali Suliman’s Abu Walid) where they discuss the audacity of those pretending like they possess an armed militia. It’s no different from today with Israelis firing into crowds of unarmed civilians because someone threw a can. Oppressors will utilize whatever excuses are at their disposal to continue their oppression; their zealots will believe the flimsiest of them if doing so serves their needs. Everything is a weapon for those itching to respond with deadly force.

I doubt the obvious allusions to Holocaust films (sans concentration camps) are unintentional, either. We’ve seen countless depictions of Jewish Europeans hiding from Nazis as the Third Reich stormed into homes with impunity to line people up against the wall and organize a firing squad. Farha becomes that innocent made to watch as people who look and talk like her are butchered feet away. That one would happen so soon after the other is therefore something to contemplate and discuss; one people’s suffering should never validate the conscious acts of causing another people to suffer in similar ways. As the broken Arabic of loudspeakers states that all Arabs must vacate or be killed in their homes, however, nothing about this diaspora’s commencement was ever voluntary.

Farha‘s success is thus predicated on our ability to watch what unfolds and believe its veracity. That will probably be a tall ask for those who deny Palestinians their right to be angry about what was done to them. Hopefully seeing it through the eyes of a child will help sway hearts and minds to reality, though. First-time actor Taher is fantastic in the eponymous role, struggling with allegiance to her village and dreams of enjoying the city. Just because one wishes to escape their simple life doesn’t mean they aren’t intrinsically bonded to it. We leave for our educations in the knowledge that home will remain, either as a time capsule or a siren calling us back. For too many Palestinians today, returning to theirs became impossible.

Jared Mobarak is a Rotten Tomatoes-approved film critic for The Film Stage, Art Director for the Buffalo, NY film series Cultivate Cinema Circle, and member of OFCS and GWNYFCA. You can follow his cinematic viewing habits at Letterboxd.