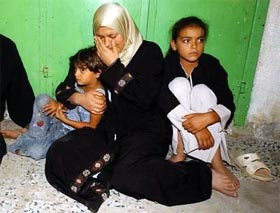 Then the streets started screaming and we were running almost without thinking, down the edges of the street around the people who had lost their fear, around donkey carts loaded full, ran until we fround a corner to turn into and then we ran past families and children, through narrow streets far enough from the main street not to know the worst, far enough that we were the ones spreading the news that the army had come back.

Old men’s eyes opened wide and mothers pulled their children inside, casting weary gazes in the direction from where we had come. We found Sea Street and a taxi and headed towards Block J. A machine gun fired from a tank as it entered Yibneh. It was maghreb time. The sun burning a hole in the sky as it fell behind the wall at the edge of town.

When we’d come to Yibneh the camp was already in exodus mode. Donkey carts piled high with furniture, men removing the doors of their homes from the hinges, children holding the keys to their homes on neon green keychains, the modern picture of a refugee descended from refugees, meeting exile every other generation.

The army had come during the night leaving a city stripped bare, the broken bones of houses like twisted bodies reaching up to heaven. Trees and streets, power lines and water pipes, broken, twisted around each other, uprooted. A graveyard of life things. The real dead had been carried out on stretchers, mostly after lying on the street for hours between tanks and the fearful closed doors of curfew, while the ambulances negotiated with the army to gain access. It was a perfect autumn day, soft clouds dotting a sky blue as swimming pools.

The army had come during the night in the sound of thunder rumbling down the border frightening the whole town. It left, not through the streets as it had come, but by creating a path through the homes still standing in Yibneh, demolishing anything in its way and driving over the remains.

It left 10 people dead and upwards of 80 injured; over 100 homes demolished and 2,000 people homeless, according to the UN’s estimate. And even then, the army left incompletely and provisionally, remaining stationed along the border, and Moshe Allon calling to deploy more reserves. The word on the street is that the army has left just long enough for the frightened families to leave the camp, an empty shell for the army to finish demolishing.

That night I stayed with Noura and the family down by Salah el-Deen gate. In the morning we peeked over the balcony. A tank was still sitting by the Block O tower. It didn’t stop shooting either. All day in spurts.

Most of the dead were teenage boys with more curiosity than fear who went outside just to see what was in their street keeping them inside their homes. They were wheeled out on stretchers to sit in the hospital refrigerators for days, waiting for their family to identify them, some unidentifiable. Held in limbo waiting for the army could leave so their families could bury them.

When they did hold funerals it was not in the camp where the army was threatening to reinvade, but far away, in the center of the city, in Hay Il-Ijnena. But not far enough. An Apache dropped a missile on an empty field next to a funeral on the second day of invasion, the funeral for someone who lives in Hay Il-Ijnena, the most expensive part of town, known for its distance from the border. They died when an Apache fired explosive bullets through the roof of his home.

When the army entered we were on the roof passing aroung stories and dreams. The Apaches came in like a foreboding signal of the end of the world, dropping fist-sized bombs — boom boom boom, explosions every several minutes from the planes and the tanks. We spent the night in the office waking with fear and coffee, every bullet sounding like it was coming through our windows. We are in the center of the city. All the shooting comes from the borders, and even if it doesn’t reach our walls it shoots in our direction, it sounds awful, like wretching rain.

People filled up the hospital and in the morning it was already low on supplies. Nobody could get to the European Gaza Hospital, the only descent facility in the area, where tanks had been parked for days not letting anyone out or in. The dead waited in the refrigerators for identification. The beds were full and overflowing.

My friend Adwan was the first to identify his friend since 12 years. 19-year-old Mabrouk, whose name means “congratulations”, was shot three times in the head and five in the back while walking home.

In the mosque, men gathered for prayer and sharing information. Mohammed came back with news. The sheikh at the library, the one we all know, had been killed while walking down the street, a bullet in the heart. One of the ambulance drivers that drove Rachel Corrie to the hospital had also been killed on his way to rescue the injured. His was one of two ambulances the army shot at that night.

Down the street from my friend Feryal in Block J, an eight-year-old boy — her neighbor’s son — was killed at the door of his home when a tank backed into his home and then shot him as he ran out, and then denied the ambulance entrance for two hours while he bled to death. Feryal was pregnant and expecting her fifth child any day. Four tanks were parked at each corner of her block.

I went with the municipality workers to negotiate with the army to let them fix the water and electricity on a street that hadn’t had for days. The real heros here are the municipality workers and the ambulance drivers who have lost their fear in order to keep the city together. I spoke from a distance of ten yards with a soldier in an APC, to see if the workers could fix the water system. He gave me a thumbs up sign. He appeared to be trying to understand. Parallel universes colliding. I couldn’t believe I was talking with a real person inside this massive machine, I was so hungry for human contact, to put a face with the military machinery. We shouted to each other from opposite sides of a road block the army had put up, the divide was a gulf none of us could cross. I stood for too long, gawking at him, wishing I could talk to him for hours until he left his tank, feeling naive and silly in the afternoon sun.

The army had uprooted the entire street. Water was filling the sand everywhere in the places water pipes had been broken. People had run out of food, had no water or electricity for two days at that point. Two women who wanted to bring clothes for their children inside the militarized area were denied entry. The municipality, who wanted to bring food relief to the people in the sealed-off area and to fix the water and electrical systems there, was denied entry.

The night before I had slept with Naela’s family. The invasion was one day old. Jenin was the word on everyone’s lips, Bb’eyn Allah (“God sees”).

The army used some kind of nerve gas for the first time in Rafah, leaving people in convulsions for days.

And last night, I ran from Yibneh’s streets as the army came back in and found my way directly to Feryal’s house in Block J, better to be with her under curfew than to worry from outside. The army didn’t come as it had before but drove in enough to scare the people into exodus and then shot all night long. I began to mix all loud noises with gunfire, the way I used to when I first arrived here.

We slept incompletely. Outside, everything around had been demolished. The morning was still. Families were sitting on the doorsteps of their neighbors’ homes gazing at the damage. The area had gone from a crowded lively neighborhood to a strange antique gallery, children rummaging through the best climbing spots of twisted cars and broken homes. A few more weeks and the army will finish its work and “clean” the area — dig away the dead bones of the city – until nothing remains but a flat, sandy expanse, a military parking lot. Even the ghosts will leave the area, searching for better horizons.

Even as I sit by Feryal now in the crowded clinic benches full of pregnant women and screaming children, tanks shoot into the camps. It hasn’t stopped all morning or all night, and there are four new injuries. The whole town is frightened, afraid to let out its breath. The sadness is dry and wordless. People are staying in tents on the street, some families have room to take in the new homeless.

The army is lying as usual, saying only 10 homes were destroyed and that the people killed were gunmen. Journalists are trying to get here but with difficulty and under the guidelines that they follow military instruction. The ultrasound machine sounds like gunfire to my frightened ears. Feryal looks forward, eyes cynical, sarcastic, watching from a distance.

Laura Gordon is a 20-year-old American Jew who came to Israel in December 2002 with the Birthright Israel program and proceeded, three months later, to begin work with the International Solidarity Movement in Rafah.