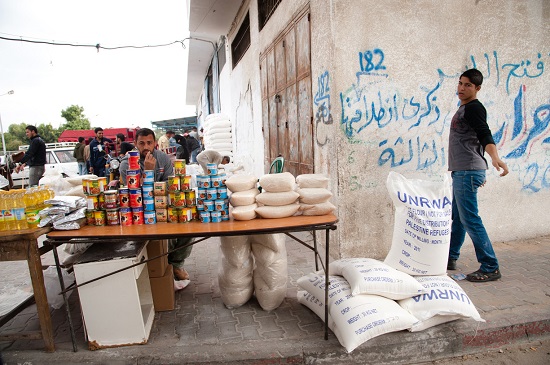 Last month, President Trump announced his administration’s reckless, one-sided decision to recognize Jerusalem as the capital of Israel and eventually move the U.S. embassy there. Now the administration is threatening to cut off U.S. aid to the Palestinians — a move that would have disastrous consequences for the Palestinian refugees who depend on it.

Take action today by signing the AFSC petition urging Congress
• to reject any cuts to vital aid for Palestinians and
• to oppose the decision to recognize Jerusalem as Israel’s capital.

We must oppose the administration’s actions, which undermine prospects for peace, threaten to harm security for both Israelis and Palestinians, and could make daily life harder for the most vulnerable Palestinians.

The Trump administration’s threat to cut assistance to UNRWA came after the Palestinian Authority understandably rejected the U.S. decision on Jerusalem and announced that it would no longer accept the U.S. as a mediator for peace talks.

U.S. aid to the Palestinians includes bilateral assistance for programs in the West Bank and Gaza and annual contributions to the United Nations Relief and Works Agency for Palestine Refugees (UNRWA). Although it was unclear which aid will be targeted for cuts, the administration has already announced that only $60 million of a $125 million dollar funding installment will be released to UNRWA, with conditions placed on any future U.S. funding to UNRWA.

If UNRWA cannot deliver services, half a million Palestinian children will suffer, according to spokesman Chris Gunness.

While we urge Congress to protect aid for Palestinians, we must also continue to press them to address the core issue of Palestinian refugees continually denied their fundamental rights, specifically the right to return to their lands and homes.

Contact your members of Congress today and ask them to:

• Support constructive political action to achieve a just and lasting peace that will include a fair resolution to all outstanding Israeli and Palestinian concerns, including the status of Jerusalem and the rights of Palestinian refugees.

• Advocate for the U.S. administration to reverse its decision to recognize Jerusalem as Israel’s capital and to begin the process of moving the embassy there.

• Reject any cuts to U.S. funding for UNRWA.