Representatives Mark Pocan, Dan Kildee, and Hank Johnson Jr. were denied the opportunity to witness conditions on the ground firsthand 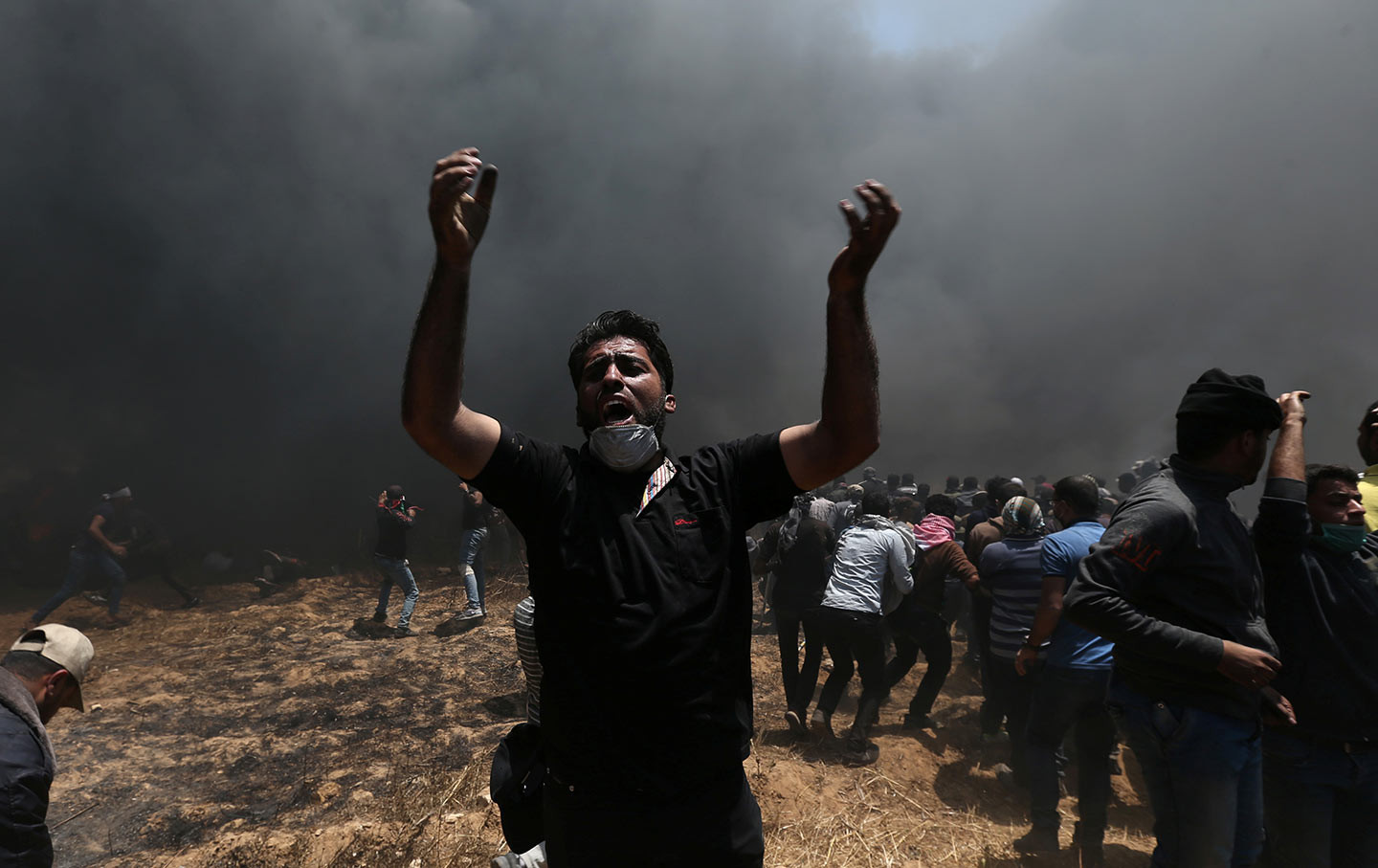 A Palestinian demonstrator shouts during a protest at the Israel-Gaza border on May 14, 2018. (Reuters / Ibraheem Abu Mustafa)

The Trump administration’s response to the killings of dozens of Palestinian demonstrators by Israeli soldiers was to fault the organizers of mass demonstrations by people who are living in nightmarish conditions on the Gaza Strip. While a White House spokesman claimed that “the responsibility for these tragic deaths rests squarely with Hamas,” the man Donald Trump has charged with renewing the Middle East peace process, presidential son-in-law Jared Kushner, literally faulted protesters amid reports of the mass killing and wounding of Palestinian men, women, and children who were objecting to Israeli policies. “As we have seen from the protests of the last month and even today, those provoking violence are part of the problem and not part of the solution,” Kushner claimed at a ceremony marking the opening of the new United States embassy in Jerusalem.

But responsible members of Congress—many of them with long experience observing the Middle East—saw the circumstances more clearly, and responded in more realistic terms.

“This is horrific.”
— Barbara Lee on the killings of Palestinians this Monday

Noting the juxtaposition of the embassy opening and the killings, Congresswoman Barbara Lee (D-CA) tweeted: “This is horrific. My prayers are with those killed & injured in Gaza. The U.S. should be laying the groundwork for peace—not fueling conflict in the region with an unnecessary & counterproductive embassy move.”

Senator Bernie Sanders (I-VT) called for urgent diplomatic action. “More than 50 killed in Gaza today and 2,000 wounded, on top of the 41 killed and more than 9,000 wounded over the past weeks. This is a staggering toll,” said Sanders, who explained that: “Hamas violence does not justify Israel firing on unarmed protesters. The United States must play an aggressive role in bringing Israel, the Palestinian Authority, Egypt and the international community together to address Gaza’s humanitarian crisis and stop this escalating violence.”

Congressional Progressive Caucus co-chair Mark Pocan (D-WI) announced: “There are better ways to deal with the tensions in Gaza than bullets.” Along with CPC co-chair Raúl Grijalva (D-AZ) and key members of the caucus such as Pramila Jayapal of Washington, Keith Ellison of Minnesota, and Hank Johnson Jr. of Georgia, Pocan issued a statement that expressed shock and dismay at “the lethal force used by Israeli troops against mostly unarmed protesters demonstrating at Gaza’s border” and called on Israeli Prime Minister Benjamin Netanyahu’s government to “show utmost restraint, allow for unfettered medical attention for those who have been wounded, and ease the 12-year blockade on Gaza, which has contributed to grave food insecurity, unemployment and a humanitarian crisis for Gaza’s two million inhabitants.”

At the same time, Pocan renewed his call for the opening of the Gaza Strip to congressional delegations. In order to advance the cause of diplomacy, and to ensure that there is proper oversight of federal spending in the Middle East, the lawmaker wants members of Congress to be allowed to visit Gaza.

Along with Congressmen Johnson and Dan Kildee (D-MI), Pocan recently called on the the Israeli government to permit them to enter the Palestinian region. The three congressmen, all of whom visited Israel in 2016 but were denied the opportunity to cross into the Gaza Strip by the Israeli Coordination and Liaison Administration, wrote in late April to Ron Dermer, the Israeli ambassador to the United States. They explained:

As you know, the humanitarian crisis in the Gaza territory is quickly worsening, with nearly 1 million Gaza residents now dependent on emergency food assistance, in large part due to a decade-old land, sea and air blockade. In addition to nearly half of Gaza’s 2 million inhabitants being unemployed and on food assistance, the United Nations has reported that “Gaza’s only water source will be depleted, and irreversibly so by 2020, unless immediate remedial action is taken.” Furthermore, the provision of electricity remains well below what is needed to provide critical services, like health care and wastewater treatment.

Noting that the past denial of entry had “obstructed” them in their “obligation to exercise oversight over US tax dollars,” Pocan and his colleagues concluded the letter with a clear ask. “Given the current situation in Gaza, our attention is required now more than ever,” they wrote.

We can think of no reason to deny us access to Gaza again, short of making sure that outside officials not see the worsening conditions. With that, we respectfully request that the Israeli government expedite and approve our request to enter the Gaza Strip for the purpose of observing and evaluating the U.S.-financed humanitarian work.

Pocan told The Nation on Monday that he and his colleagues had yet to receive a response to the letter. But, as the Gaza death toll was reported, the congressman said he was more determined than ever to press for permission to visit the Palestinian region. “We’re still doing everything we can to get to Gaza,” said Pocan. “It’s more important now.

John Nichols is The Nation’s national-affairs correspondent. He is the author of Horsemen of the Trumpocalypse: A Field Guide to the Most Dangerous People in America, from Nation Books, and co-author, with Robert W. McChesney, of People Get Ready: The Fight Against a Jobless Economy and a Citizenless Democracy.