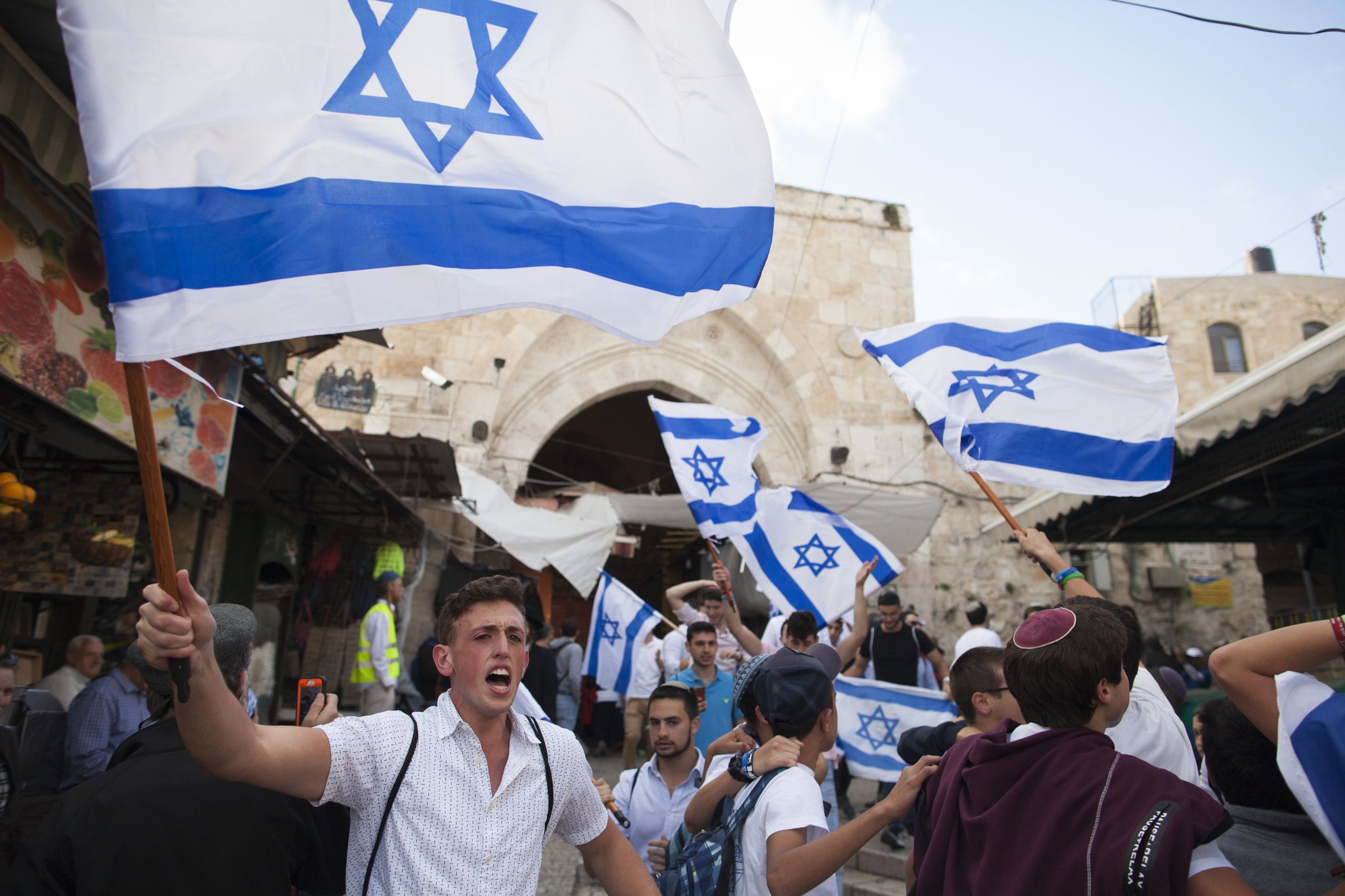 Israelis marching at Damascus Gate in Jerusalem in May to mark the occupation of East Jerusalem in 1967 (Lior Mizrahi/Getty Images).

We were driving our rental car out of Ben Gurion Airport near Tel Aviv.

“Dad,” my oldest daughter said as we listened to the radio, “what’s the Nationality Law?”
“It’s a law that says Israel is a Jewish state,” I replied.
“But wasn’t it always that way?” she wondered, and rightly so.
“Yes. Bottom line, it’s always been that way.”
“I don’t get it,” my middle son said. “I thought you said we were citizens.”
“We are,” I answered.
“But we’re not Jewish, right?”
“No, we’re not.”
“Then I don’t get it,” my youngest son complained.
“It’s a little complicated,” I tried to explain.

And it really was complicated to explain the law that Israel’s Parliament passed earlier this month without using terms like “racial segregation,” “discrimination” and “supremacy.” How was I going to explain to a 12-year-old that he is a citizen of a state that holds that he is inferior because of his non-Jewish origins? “Not everyone in the country is Jewish,” I said. “At least 20 percent of the citizens are not. But it’s a country where Jews enjoy rights that others don’t have. Meaning, non-Jews are less equal than Jews.”

“Can’t we be Jewish then?” my youngest son asked, as if he’d instantly solved the inequality problem.

“Sorry,” I told him, “that’s not up to me. According to Israeli law, in order to be Jewish you have to have a Jewish mother. So it’s not my fault; it’s your mom’s.”

“Great,” my wife protested, “now you’re shouldering me with your children’s inequality?”

When Israel was founded on the ruins of the Palestinian people in 1948, it was defined as a Jewish state. The Israeli flag was always a Jewish one, bearing a Star of David; the national anthem invokes the “Jewish soul,” excluding anyone who is not Jewish from these national symbols. The Palestinians who became Israeli citizens when the state was founded — like my family — have always been viewed as an undesirable demographic burden and subjected to discrimination.

So what does the issuance of the Nationality Law change? In essence, perhaps not that much. It has turned de facto racism into de jure racism.

The law asks progressive Israelis — both Jewish and Palestinian — to suspend our fantasies of equal rights and a future in which all the country’s citizens, regardless of religion, race or gender, have a sense of belonging. It seeks to legislate what Israel has been effectively telling non-Jewish minorities all along: You will never be a part of this country, you will never be equal, you are doomed to be unwanted citizens forever, to be inferior to the Jews to whom the state belongs and for whom it was founded. A state in which Judaism is the only national expression permissible by law will, by definition, reject any minority member who wishes to be part of it, even if he is, like me, fluent in its culture or, as I do, writes literature in its language, respects its laws, serves its society.

Israel’s message to its Arab citizens is that it does not wish to be our state. Moreover, it prefers to be the state of people who were born elsewhere, who do not speak its language, have never visited it or paid it taxes or served it in any way. The State of Israel will welcome these foreigners, wherever they are from, as long as they are considered Jewish by Orthodox Jewish law. Individuals who are lucky enough to have been born to Jewish mothers can — practically overnight — receive Israeli citizenship, join the ruling race and become masters of the native population.

The Nationality Law prevents the possibility of multiculturalism in Israel and rejects any collective history or memory other than the Zionist one. By revoking Arabic’s status as an official state language, the law delivers yet another blow to the culture that has been vying for a position since Israel was founded. Article 7 of the Nationality Law, whereby the state shall regard Jewish settlement as a national value and work to advance it, has a distinctly colonialist tone, addressing Jewish settlement without any mention of the 20 percent of the population who are Arabs and who live in crowded conditions, under continuous threat of having their land appropriated.

While the message to Arab citizens within the State of Israel is unequivocal, the Nationality Law is murky when it comes to the Palestinians who reside in the West Bank and Gaza. What are the limits of the law, and to whom does it apply, in a state that avoids declaring its borders and refuses to accept those determined by international law? Doesn’t the fact that Israel controls the Palestinians in the Occupied Territories through military rule mean that it is now a state in which one population has civil rights and a second population is under occupation and lacks civil rights?

The powerful right wing in Israel wishes to annex the West Bank, or large parts of it, and some voices have been saying that Israeli law should be instated in the Occupied Territories, too. If this were to occur, how would the Nationality Law apply to the millions of Palestinians under occupation? Would there still be a prohibition against any definition other than the national-Jewish one? Does this law not aim to prevent any possibility of national Palestinian fulfillment in the State of Israel as conceived by the right wing — namely, one Jewish state from the Mediterranean Sea to the Jordan River, in which only Jews are permitted self-actualization and granted a national identity?

It seems the only hope for the remaining millions of Palestinians to avoid losing what is left of their home is to find a Jewish mother who will agree to adopt them.

Sayed Kashua is a writer and a Palestinian citizen of Israel. Mr. Kashua is the author, most recently, of “Native: Dispatches From an Israeli-Palestinian Life.” This essay was translated by Jessica Cohen from the Hebrew.