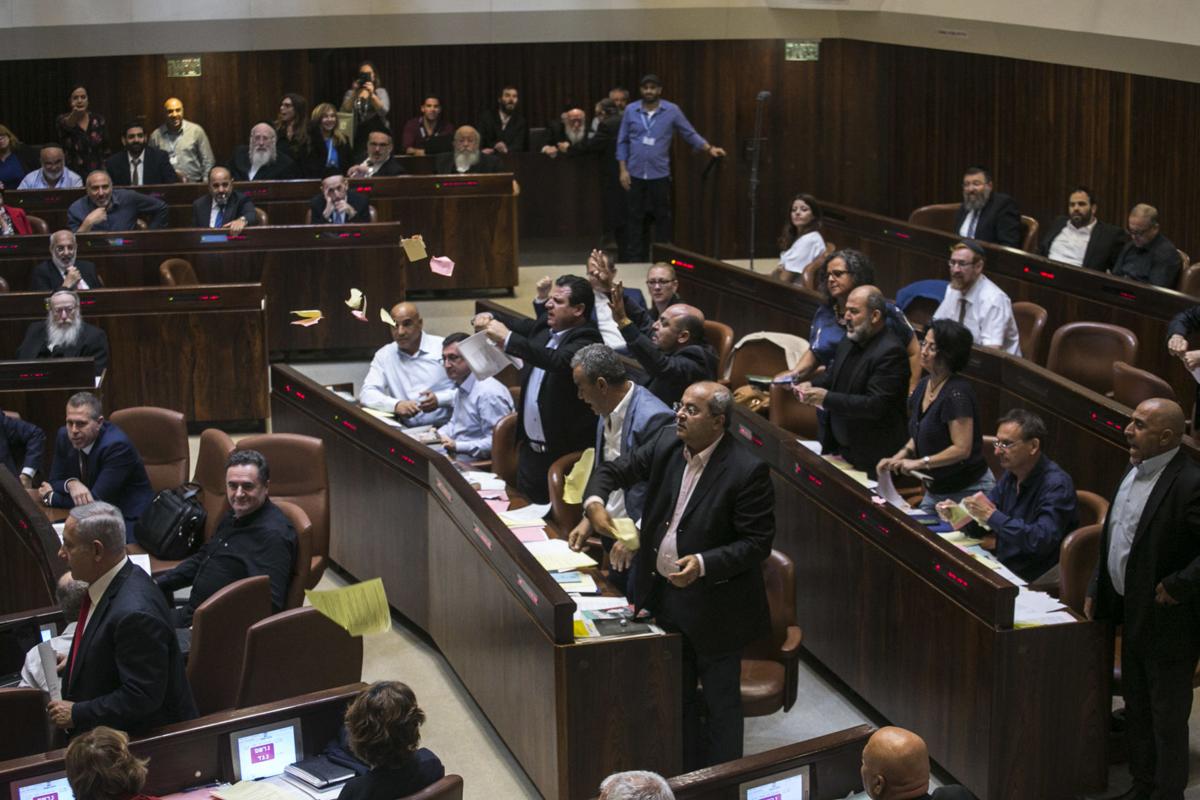 Arab lawmakers protesting as Parliament passed a law on Thursday that defines Israel as the “nation-state of the Jewish people.” (Olivier Fitoussi/Associated Press)

JERUSALEM — Prime Minister Benjamin Netanyahu of Israel has long demanded that the Palestinians acknowledge his country’s existence as the “nation-state of the Jewish people.” On Thursday, his governing coalition stopped waiting around and pushed through a law that made it a fact.

In an incendiary move hailed as historic by Mr. Netanyahu’s right-wing coalition but denounced by centrists and leftists as racist and anti-democratic, Israel’s Parliament enacted a law that enshrines the right of national self-determination as “unique to the Jewish people” — not all citizens.

The legislation, a “basic law” — giving it the weight of a constitutional amendment — omits any mention of democracy or the principle of equality, in what critics called a betrayal of Israel’s 1948 Declaration of Independence, which ensured “complete equality of social and political rights” for “all its inhabitants” no matter their religion, race or sex.

The new law promotes the development of Jewish communities, possibly aiding those who would seek to advance discriminatory land-allocation policies. And it downgrades Arabic from an official language to one with a “special status.”

Since Israel was established, it has grappled with the inherent tensions between its dual aspirations of being both a Jewish and democratic state. The new law, portrayed by proponents as restoring that balance in the aftermath of judicial rulings that favored democratic values, nonetheless struck critics as an effort to tip the scales sharply toward Jewishness.

Its passage demonstrated the ascendancy of ultranationalists in Israel’s government, who have been emboldened by the gains of similarly nationalist and populist movements in Europe and elsewhere, as Mr. Netanyahu has increasingly embraced illiberal democracies like that of Hungary — whose far-right prime minister, Viktor Orban, arrived in Jerusalem for a friendly visit only hours before the vote.

With the political opposition too weak to mount a credible threat, and with the Trump administration providing a never-before-seen degree of American support, Mr. Netanyahu’s government, the most right-wing and religious coalition in Israel’s 70-year history, has been pressing its advantages on multiple fronts.

It has sought to exercise more control over the news media, erode the authority of the Supreme Court, curb the activities of left-wing advocacy groups, press ahead with moves that amount to de facto annexation of parts of the West Bank, and undermine the police by trying to thwart or minimize the effect of multiple corruption investigations against the prime minister.

The police have already recommended that Mr. Netanyahu be charged with bribery in two inquiries.

But none of these expressions of raw political power has carried more symbolic weight than the new basic law.

“This is a defining moment in the annals of Zionism and the annals of the state of Israel,” Mr. Netanyahu said after the bill was enacted in the early morning after hours of impassioned debate, just before the Knesset, or Parliament, went into summer recess.

“We have determined in law the founding principle of our existence,” he said. “Israel is the nation-state of the Jewish people, and respects the rights of all of its citizens.”

Opponents say the law will inevitably harm the fragile balance between the country’s Jewish majority and Arab minority, which makes up about 21 percent of a population of nearly nine million.

If the new law was meant to give expression to Israel’s national identity, it exposed and further divided an already deeply fractured society. It passed in the 120-seat Parliament by a vote of 62 to 55 with two abstentions. One member was absent.

Moments after the vote, Arab lawmakers ripped up copies of the bill while crying out, “Apartheid!” Ayman Odeh, the leader of the Joint List of predominantly Arab parties, which holds 13 seats and is the third-largest bloc in Parliament, waved a black flag in protest.

“The end of democracy,” declared Ahmad Tibi, a veteran Arab legislator, charging the government with demagogy. “The official beginning of fascism and apartheid. A black day (another black day),” he wrote on Twitter.

Yael German, a lawmaker from the centrist opposition party Yesh Atid, called the law “a poison pill for democracy.” 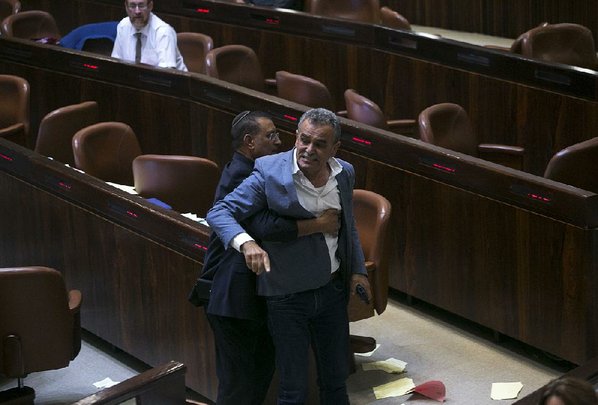 Jamal Zahalka, an Israeli Arab member of the Knesset, is removed from the chamber in Jerusalem as he protests Thursday’s passage. (Olivier Fitoussi/Associated Press)

The law is now one of more than a dozen basic laws that together serve as the country’s Constitution and can be amended only by a majority in the Knesset. Two others, on human dignity and on liberty and freedom of occupation, both enacted in the 1990s, determine the values of the state as both Jewish and democratic.

The basic laws legally supersede the Declaration of Independence and, unlike regular laws, have never been overturned by Israel’s Supreme Court.

Dan Yakir, chief legal counsel for the Association for Civil Rights in Israel, said that while largely only declaratory, the new law “will give rise to arguments that Jews should enjoy privileges and subsidies and rights, because of the special status that this law purports to give to the Jewish people in Israel.”

He noted that a right to equality in Israel had been derived, by interpretation of the Israeli Supreme Court, from the Basic Law on Human Dignity, but that the new law was explicit in elevating the status of Jews.

“There is a plausible argument that the new basic law can overrule the right of equality that is only inferred, and is not specified anywhere in our constitution,” he said.

Adalah, a legal center that campaigns for Arab rights in Israel, warned that the law “entrenches the privileges enjoyed by Jewish citizens, while simultaneously anchoring discrimination against Palestinian citizens and legitimizing exclusion, racism, and systemic inequality.”

Some supporters lamented that many of the law’s more polarizing clauses had been diluted to assure passage. Critics decried it as a populist measure that largely sprang from the perennial competition for votes between Mr. Netanyahu’s conservative party, Likud, and political rivals to its right.

“I don’t agree with those saying this is an apartheid law,” said Amir Fuchs, an expert in legislative processes and liberal thought at The Israel Democracy Institute, an independent research group in Jerusalem. “It does not form two separate legal norms applying to Jews or non-Jews,” he said.

But he added, “Even if it is only declarative and won’t change anything in the near future, I am 100 percent sure it will worsen the feeling of non-Jews and especially the Arab minority in Israel.”

The law, which also was subtly changed where it addresses the Jewish diaspora to mollify ultra-Orthodox leaders, who feared it could promote Jewish pluralism in Israel, also drew protests from overseas.

“We will use all of the legal means available to us to challenge this new law and to promote Reform and Progressive Judaism in Israel,” said Rabbi Rick Jacobs, president of the New York-based Union for Reform Judaism.

Many North American Jews have grown increasingly alienated from Israel over the Netanyahu government’s hawkishness and coercion by the strictly Orthodox state religious authorities. They remain angry nearly a year after Mr. Netanyahu reneged on an agreement to improve pluralistic prayer arrangements at the Western Wall in Jerusalem, once a hallowed symbol of Jewish unity, and promoted a bill enshrining the Orthodox Chief Rabbinate’s monopoly over conversions to Judaism in Israel.

The new law stipulates that Hebrew is “the state’s language” and demotes Arabic to “special status,” though it is a largely symbolic sleight since a subsequent clause says, “This clause does not harm the status given to the Arabic language before this law came into effect.”

Another highly divisive clause in the draft version, which experts said would have opened the door to legalized segregation, was replaced by one declaring “the development of Jewish settlement as a national value” and promising “to encourage and promote its establishment and consolidation.”

Some critics argued the replacement clause was even worse, because while the previous version allowed for separate but equal communities, the new one could be interpreted to allow for discrimination in the allocation of resources.

Proponents of the new law cite continuing demographic threats: Some in Israel’s Arab minority are demanding collective rights and already form a majority in the northern Galilee district. Others view it as a largely pointless expression of nationalism that lays bare basic insecurities in a hostile region and will serve only to fan tensions at home and beyond.

Avi Shilon, an Israeli historian who teaches at Ben-Gurion University of the Negev and New York University’s campus in Tel Aviv, noted that Mr. Netanyahu and Likud were the ideological heirs of the right-wing Zionist Revisionist movement of Zeev Jabotinsky, which believed that words could shape reality.

That view is in contrast with those held by the Labor Zionist founders of the state, led by David Ben-Gurion, the first prime minister, who placed more faith in deeds and actions.

“The great spirit of Ben-Gurion and the founding fathers was that they knew how to adjust to the times,” Mr. Shilon said. “Mr. Netanyahu and his colleagues are acting like we are still in the battle of 1948, or in a previous era.”

A former Labor Party legislator, Shakeeb Shnaan, a member of Israel’s small, Arabic-speaking Druze community, whose men are drafted for compulsory service in the military, pleaded emotionally for the bill’s defeat. His son was one of two Druze police officers killed in a shooting attack a year ago while guarding an entrance to Jerusalem’s holiest site for Jews and Muslims. The perpetrators were Arab citizens of Israel.

“The state of Israel is my country and my home, and I have given it what is most dear to me, and I continue, and I will continue, to serve it with love,” he said, before adding: “The nationality law is a mark of Cain on the forehead of everyone who votes for it.”