“You live in a democracy, and suddenly you understand it is not a democracy any more” 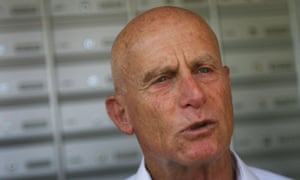 Two former heads of Israel’s powerful domestic intelligence service, the Shin Bet, have made an impassioned and powerful intervention ahead of events to mark the 50th anniversary of the country’s occupation of the Palestinian territories in June.

One of the pair warned that the country’s political system was sunk in the process of “incremental tyranny”.

Ami Ayalon and Carmi Gillon were speaking ahead of a public meeting at a Jerusalem gallery which is threatened with closure for hosting a meeting organised by the military whistleblowing group Breaking the Silence, one of the main targets of the rightwing government of Benjamin Netanyahu.

During his recent visit to the UK, Netanyahu also asked Theresa May to cut UK government funding to the group – a request that baffled diplomats as no direct UK funding exists.

“Incremental tyranny [is a process] which means you live in a democracy and suddenly you understand it is not a democracy any more,” Ayalon told a small group of journalists, including the Guardian, ahead of the event. “This is what we are seeing in Israel. The tragedy of this process is that you only know it when it is too late.”

Ayalon cited recent moves by ministers in the Netanyahu government to change the laws to hit groups such as Breaking the Silence by banning them from events in schools and targeting their funding, while also taking aim at the country’s supreme court and independence of the media.

Issues of freedom of speech and expression have become one of the key faultlines in Israeli society – in everything from the arts to journalism – under the most rightwing government in the country’s history.

The Babur gallery is under threat of closure after being censured by the country’s culture minister, Miri Regev, for holding an event with Breaking the Silence on publicly owned property – a group which Regev claimed “hurts Israel’s image”.

Gillon was equally bleak in his analysis of Israel’s trajectory, saying that the country was being “driven by this occupation towards disaster”.

He added: “This country was established on the values of liberal democracy, values written in the only kind of constitution we have – which is our declaration of independence – values we don’t fulfil any more. You can analyse what happened to us in the last 50 years, but everything is under the shade of occupation. It has changed us a society. It has made us an unpleasant society.”

“I am here,” added Gillon, “because I think that Breaking the Silence and groups like it are completely legitimate organisations. Sometimes I don’t like what they say, but the mission they took on themselves, through interviews with soldiers, should give a better understanding [about] what it means to occupy another people.”

The decision by Ayalon and Gillon to make such a public show of support, was seen as a big coup for the human rights group, which has been facing increasing official efforts to limit its activities.

The two also criticised the unwillingness of the Israeli media and senior opposition politicians to speak up for freedom of speech, in particular concerning the moves against groups like Breaking the Silence.

“They do what they do because they understand it is their moral duty. They are soldiers who serve and like every gatekeeper they hold up a mirror image of the Israeli reality in the occupied territories. What they see is very ugly. So we hate the mirror and blame the mirror and don’t hear what they say,” said Ayalon.

They added that they were also deeply concerned about a growing apathy in Israeli society where, after so many years, an occupation justified by the Israeli courts and legal system as temporary had come to defy the meaning of the word.

Ayalon suggested an Orwellian dynamic that supported Israelis in a state of fear for political ends. “What is necessary to pave the way for this concept of incremental tyranny is an ongoing war. It is like 1984. There is always an enemy.”

Just days ago Regev, a controversial rightwing minister, said that Breaking the Silence and others who supported it “had no place in Israel”.

The two former Shin Bet chiefs were speaking as it was revealed that one of Israel’s main official ceremonies to mark the anniversary of the six-day war would controversially take place in the settlement of Gush Etzion in the West Bank.

The two ministries will spend a total of 10m shekels ($2.74m) on events marking the anniversary of what the education minister, Naftali Bennett, and Regev described as “Israel’s glorious victory in the six-day war, and the liberation of Judea and Samaria [the West Bank], the Golan Heights and the Jordan Valley”.