“This is what happens to Palestinians every day. You can’t be a democracy while you keep millions of people under siege and military occupation.” 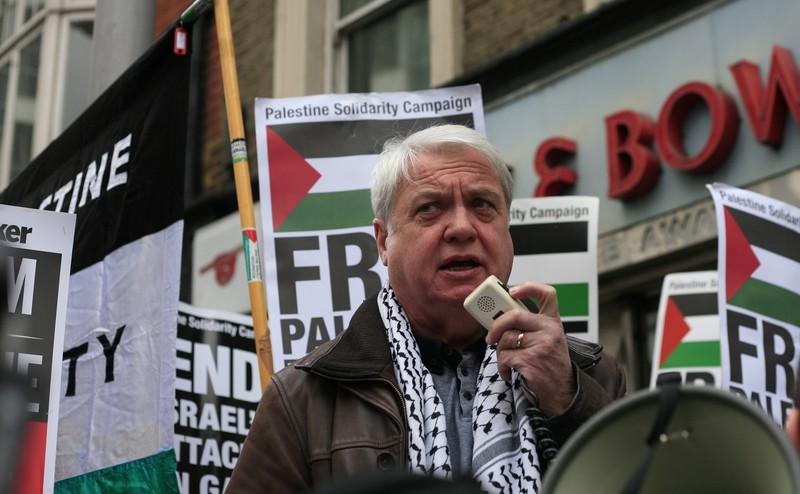 Less than a week after Israel’s parliament passed a law barring entry to supporters of the boycott, divestment and sanctions (BDS) movement, Israel has sought to make an example of a prominent UK activist.

Hugh Lanning, chair of the Palestine Solidarity Campaign, told The Electronic Intifada that he was planning a four-day visit in occupied East Jerusalem.

But he was denied entry when he flew into Israel’s main airport near Tel Aviv on Sunday.

A few days earlier, Israeli police detained anti-occupation activist Jeff Halper, on suspicion of “incitement.” Police said they had been informed that Halper, co-founder of the Israeli Committee Against House Demolitions, was distributing “materials related to BDS.” They released him after concluding he had committed no violations.

A 2011 Israeli law allows advocates of boycott to be sued for damages.

Israel’s crackdown on critics is escalating just as a landmark UN report has found that Israel is guilty of the international crime of apartheid. The report calls on governments around the world to support BDS.

Israel is also showing its anger against the government of South Africa. It is reportedly planning to summon Pretoria’s ambassador for a dressing down over comments made by South African officials likening Israel’s treatment of Palestinians to apartheid.

After being held for over seven hours, the Palestine Solidarity Campaign’s Lanning was told he would be denied entry because his activities were “hostile to Israel.”

No further explanation was provided to Lanning at the time he was expelled, but before he returned to London the following morning, Israel’s immigration authority and the ministry of strategic affairs had released a statement saying Lanning was deported because of his efforts to advance the boycott of Israel.

Strategic affairs minister Gilad Erdan, who leads the country’s effort to thwart the Palestine solidarity movement, said he was working with the interior ministry to deny entry to those “acting against Israel.”

“Reality is changing,” Erdan said. “No sane country would permit entry to the main activists calling for its boycott and who work to leave it isolated.”

“They do see us as a threat and I don’t think they know what to do,” Lanning told The Electronic Intifada.

The Israeli ministries called the Palestine Solidarity Campaign a leader in the efforts to “delegitimize Israel” in Europe, adding that its website was “rife with calls to boycott Israel,” the newspaper Haaretz reported.

Lanning said he has travelled to Palestine about a dozen times since he became chair of the Palestine Solidarity Campaign in 2009 but has never experienced any problems.

On Sunday afternoon, however, he was pulled aside as he attempted to go through passport control.

“I’ve never gone through a second round of questioning after passport control, so I assumed a flag came up,” he said.

Lanning said he was questioned by three different officers, each several times. He says the interrogators were repetitive but polite.

An official told Lanning that he had never received so many phone calls from various government officials regarding a single person attempting to enter the country.

“They were seeking guidance,” Lanning observed. “It wasn’t a decision being made by airport people.”

Lanning said he was questioned about his political activities and contacts and if he was a BDS activist.

The Israelis were clearly searching the internet for information about him.

At one point, an airport interrogator presented an image from 2012 of Lanning with a delegation entering Gaza from Egypt. The photo showed Lanning speaking at a podium at a reception ceremony that allegedly included representatives of the Hamas government.

The interrogators also asked Lanning to confirm whether an entry on Wikipedia crediting him with “a major role” in building trade union support for Palestine was about him.

The Palestine Solidarity Campaign has been a frequent target for Israel advocates since the Reut Institute, an influential Israeli think tank, identified it as a leading “delegitimizer” of Israel.

In 2015, it was revealed that Israeli military intelligence was collecting information on left-wing organizations that promote the boycott of Israel in other countries.

During his interrogation, Lanning said he remained upbeat, even making sarcastic jokes.

But he told The Electronic Intifada he is deeply sad to be turned away, possibly never to be allowed entry again to a place he has formed friendships and alliances. Lanning was told that if he wants to enter the country in future he would have to apply for permission.

“Israel keeps on saying that they’re a democracy and then proving they’re not,” Lanning said.

“It feels like I have been cut off,” Lanning added. “This is what happens to Palestinians every day. You can’t be a democracy while you keep millions of people under siege and military occupation.”