Dark money groups like AIPAC have spent millions of dollars on misinformation ads to take down progressive Democratic candidates. Democratic leadership has yet to condemn this anti-democratic meddling in our primaries.

After AIPAC spent nearly $2 million in dark-money attacks on progressive congressional candidate Jessica Cisneros in TX-28, she came up 289 votes short last night against Henry Cuellar — the only anti-choice Democrat in the House.

Sign our coalition petition to Nancy Pelosi and other House Democratic leaders: Take a stand and make clear that anyone who is part of corporate dark-money misinformation ads are persona non grata with Democrats in Congress and the DCCC.

MSNBC’s Chris Hayes is calling out AIPAC and other corporate-funded groups spending millions on misinformation campaigns against progressive candidates like Summer Lee and Jessica Cisneros. 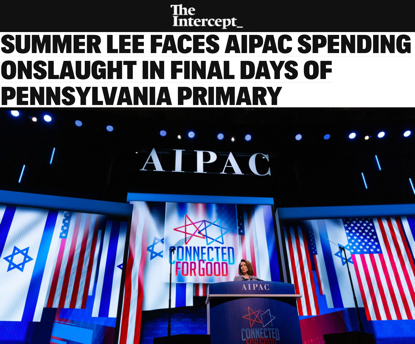 These groups don’t run ads on the issues they purport to care about — such as Israel, low corporate taxes, and slashing business regulations. Instead, they falsely accuse popular progressive candidates of being bad Democrats. This is a rich accusation from corporate-funded groups like AIPAC that “went Full Trump” and endorsed over 30 pro-insurrection Republican members of Congress.

Here’s Chris Hayes in his segment this week:

“But there’s also something else I find insidious about this particular use of big money. The issue they care about is whether the US is strong and unflinching in its support of Israel. But here’s the thing, crucially: that is not the issue that this PAC is engaging in when it gets involved in these races. They recognize Israel is not the top issue for the voters and Pennsylvania’s 12th district. So what they did instead was launch an almost comically disingenuous attack, claiming Lee is not a real Democrat.

So here’s this group you’ve never heard of, and they’re saying, like, ‘Summer Lee is bad because she’s not a real Democrat. We want authentic Democrats.’ But they don’t care who a real Democrat is. Their spokesperson was exceedingly clear about their motivations in a recent statement to the Washington Post, saying “Our goal is to build the biggest bipartisan coalition in Congress for the US Israel relationship.” Again, that’s their stated goal. That’s what they care about. They care about that, over everything else, to the point where they have endorsed over 100 Republican candidates who voted to overturn the 2020 election results after the insurrection.”

Many Democratic leaders, consultants, and agencies have cozy relationships with the groups spending these millions of dollars of dark money trying to stop progressive candidates.

Ask Speaker Pelosi and other House Democratic leaders to take a stand.