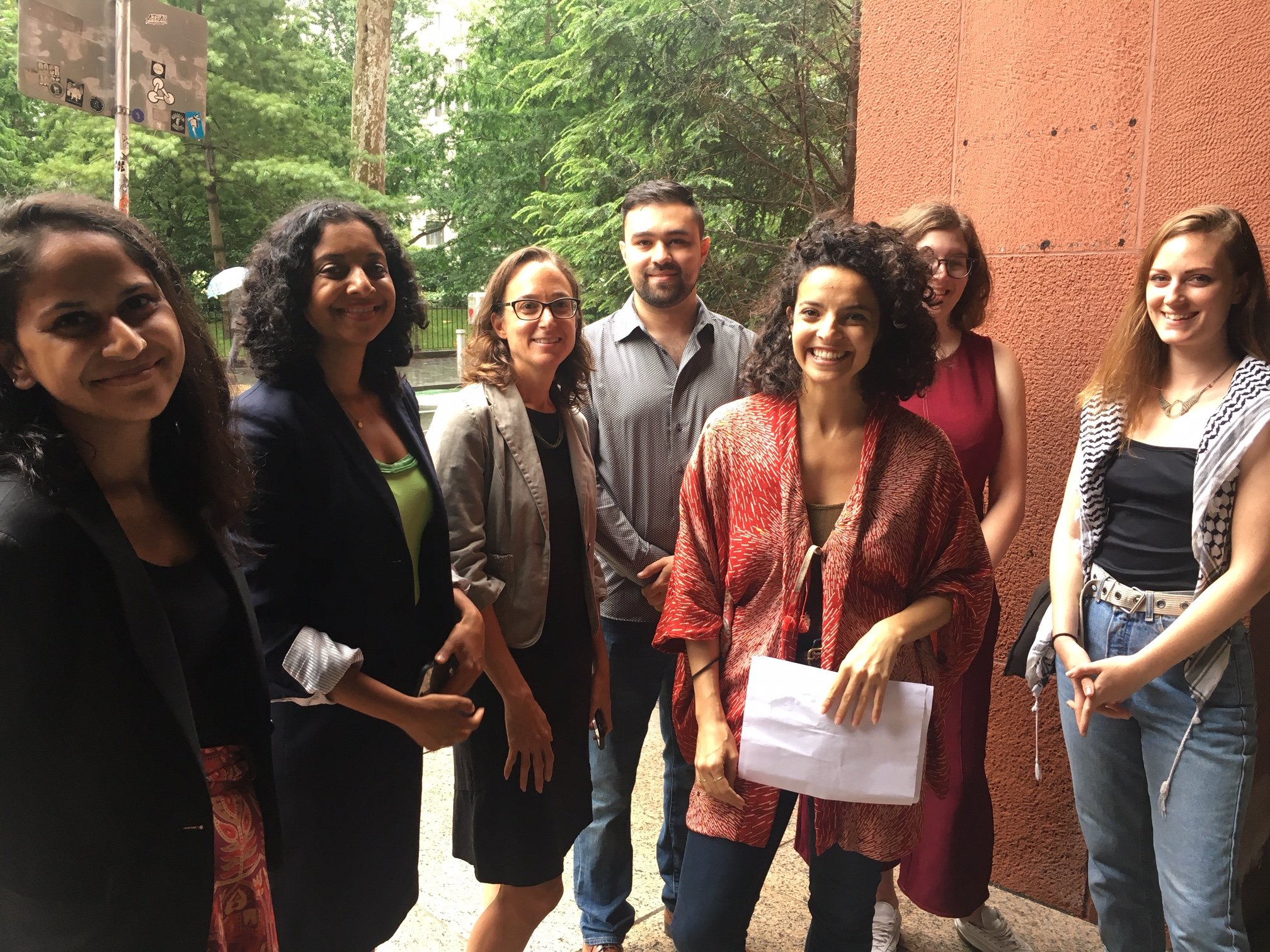 Students for Justice in Palestine at Fordham University

The court annulled Fordham’s decision to deny SJP club status, finding it arbitrary and capricious, as nothing in Fordham’s rules permitted it to “reject an application of a student club because it criticized the policies of only one nation.” In her ruling, Justice Nancy Bannon stated that “it must be concluded that [Fordham University’s] disapproval of SJP was made in large part because the subject of SJP’s criticism is the State of Israel, rather than some other nation, in spite of the fact that SJP advocates only legal, nonviolent tactics aimed at changing Israel’s policies.”

Awad, et al. v. Fordham University is the first lawsuit in the country challenging institutional censorship of students advocating for justice in Palestine, and this win marks the first major legal victory for free speech for advocates of Palestine on college campuses.

“The administration unfairly hindered my and my fellow classmates’ abilities to advocate for the human rights of Palestinians,” said Ahmad Awad, who graduated from Fordham University in 2017. “Although over 1,000 days have passed since we initiated the process for club status, I did not give up on my fight for human rights and free speech. I continued to advocate for justice in Palestine, and now because of Justice Bannon’s order, no Fordham student will be restricted or prohibited from advocating for justice in Palestine.”

Said Veer Shetty, whose attorneys argued on his behalf in February to add him to the complaint since the last remaining original petitioner graduated in May, “I am beyond happy that Justice Bannon chose to uphold the supposed values of our university and academic freedom. A huge thank you goes to everyone who worked on our behalf. Fordham’s Students for Justice in Palestine would not exist today without all of their tireless efforts. We, as a new club, will be equally tireless in our efforts to fight for the rights and dignity of the Palestinian people.”

Said Sapphira Lurie, who graduated from Fordham University in 2017, “When universities promise they are ‘committed to research and education that assist in the alleviation of poverty, the promotion of justice, the protection of human rights and respect for the environment,’ as Fordham defines its university’s characteristics, they must allow students to pursue this education. Rather than allow Fordham’s administration to impose its backwards and imperialist politics on us, we were victorious in the fight for students’ rights to organize for justice for Palestine. This victory shows that when we fight back, we can win. Free Palestine!”

The lawsuit, filed in April 2017, argued that Fordham’s veto of the student government’s approval of SJP was arbitrary and capricious, violating its own policies. In November 2017, the students filed a motion for a preliminary injunction asking the court to direct the university to recognize SJP urgently, as some of the students had graduated and others would soon graduate. Last night, Justice Bannon granted the students’ petition and unambiguously ordered Fordham University to “recognize Students for Justice in Palestine at Fordham University as a university-sanctioned club…”

“We are thrilled that students at Fordham will finally be able to form a Students for Justice in Palestine club,” said Center for Constitutional Rights Deputy Legal Director Maria LaHood. “The students’ support for Palestinian rights and their demand to freely express that support truly exemplify Fordham’s stated values, unlike the Administration’s shameful actions here.”

Said Levine, “Fordham’s decision to deny recognition to Students for Justice in Palestine was so utterly arbitrary and irrational that it can only be understood in the context of the nationwide effort to silence those voices seeking justice for Palestinians. In succumbing to those forces, Fordham abandoned its obligation to foster critical points of view on matters of public concern. Justice Bannon’s principled decision reasserts the judiciary’s role to ensure that voices of marginalized communities will be heard. Nothing could be more important at this moment.”

Said Radhika Sainath, senior staff attorney at Palestine Legal, “The judge rightly recognized that students trying to start an SJP were being singled out for censorship because they cared about Palestinian freedom. But yesterday’s decision makes clear, there can be no Palestine exception to speech at Fordham.”

Palestine Legal and the Center for Constitutional Rights have documented “the Palestine Exception” to free speech, the broad and growing pattern of suppression of activism for Palestinian rights across the United States, particularly on college campuses. Tactics used to suppress Palestine advocacy include administrative disciplinary actions, harassment, firings, baseless legal complaints, legislative attacks, and false accusations of terrorism and antisemitism. Palestine Legal has documented 1,247 incidents of suppression targeting speech supportive of Palestinian rights between 2014 and 2018.

Palestine Legal is an independent organization dedicated to protecting the civil and constitutional rights of people in the US who speak out for Palestinian freedom. Our mission is to bolster the Palestine solidarity movement by challenging efforts to threaten, harass and legally bully activists into silence and inaction. Visit www.palestinelegal.org and follow @pal_legal.

The Center for Constitutional Rights works with communities under threat to fight for justice and liberation through litigation, advocacy, and strategic communications. Since 1966, the Center for Constitutional Rights has taken on oppressive systems of power, including structural racism, gender oppression, economic inequity, and governmental overreach. Learn more at ccrjustice.org.