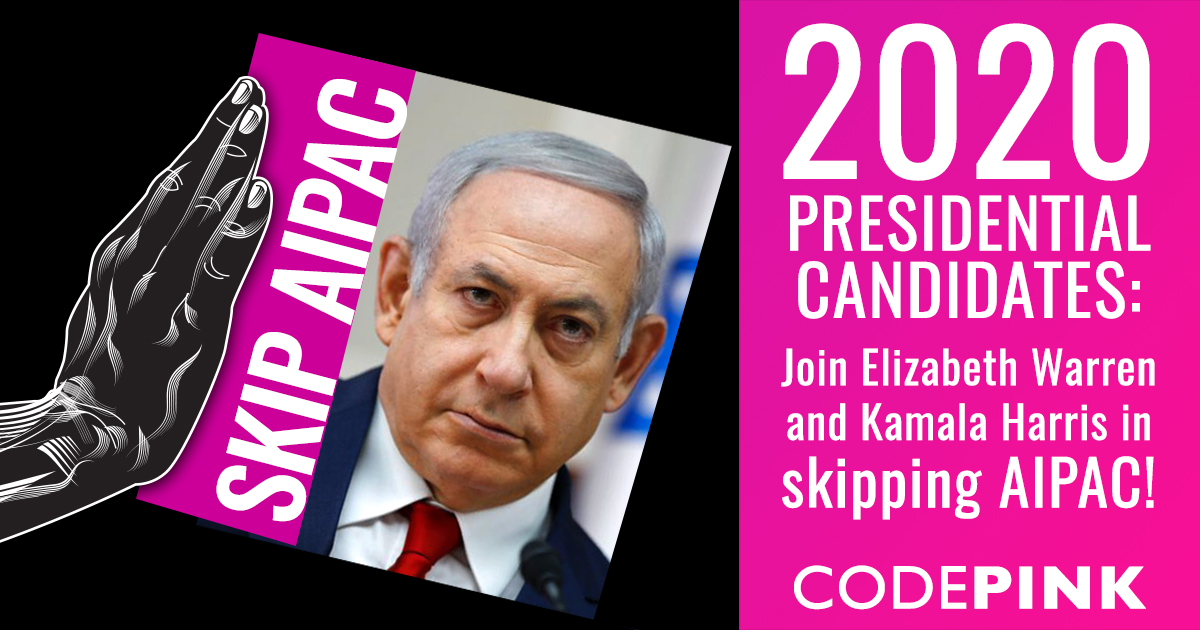 You did it! Just moments after we emailed you that Sen. Elizabeth Warren would not be attending AIPAC’s annual conference this weekend, we got the GREAT NEWS that Sen. Kamala Harris and Beto O’Rourke will be skipping AIPAC as well.

Send a message now to the rest of the 2020 election candidates telling them to flaunt their progressive values as well by joining Warren, Harris, and Beto in skipping the 2019 AIPAC conference.

Last year when Senator Harris attended AIPAC she told an audience of thousands that the history of the US Civil Rights movement is what inspired her to support a strong U.S.-Israel alliance. So for the past few weeks we have been relentless in asking Harris to change her position and start supporting Palestinian rights. The fact that she responded so quickly is a sign of the hard work we have been putting in for years, together.

AIPAC’s headliner, Prime Minister Benjamin Netanyahu, recently formed an alliance with an Israeli political party so extreme they are referred to as the Jewish KKK. Last month he made the openly racist statement, “Israel is not a state of all its citizens. It’s the nation-state of the Jewish people — and them alone.” Also speaking at this year’s conference will be Oded Revivi, Mayor of the illegal settlement of Efrat. It will be the first time ever for AIPAC to host a representative of the settlement movement.

Senators Harris, Senator Warren, and Candidate O’Rourke have expressed their rejection of AIPAC. Join us in asking the rest of the 2020 candidates: Which side are you on?

We’ve been opposing AIPAC for years and we remember protesting alone outside the conference. But thanks to all of our hard grassroots work, the Democratic party is transforming into a tidal wave of support for Palestinian rights. Today Warren, Harris, and O’Rourke came out on the side of freedom and equality. We can’t wait to update you about who joins them next!