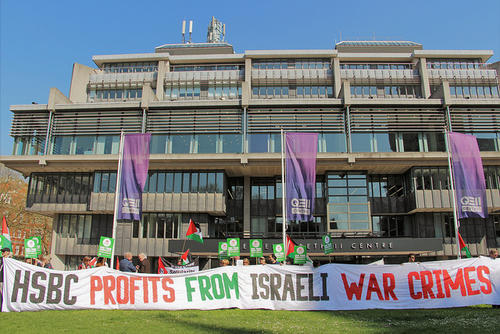 The exciting news comes on the heels of several victories for Palestinian rights in just the past couple of month — NYU ending its relationship with Tel Aviv university, Airbnb withdrawing from illegal Israeli settlements, and newly elected Congress members announcing support for BDS and that they will skip the trip to Israel with AIPAC.

Inspired by the UK’s victory and ready for lots more wins in 2019, we are calling on Wall Street-based Bank of NY Mellon to follow HSBC’s lead and divest from Elbit.

Bank of NY Mellon claims to be committed to socially responsible investment and the UN Sustainable Development goals, but holds over $6 million worth of shares in Elbit Systems. Elbit manufactures drones and surveillance technology, cannons for internationally banned cluster munitions, and white phosphorus, used on the people of Gaza in 2008-2009. Elbit also contracts with the U.S. Department of Homeland Security for surveillance along the U.S.-Mexico border.

Last month we visited BNY Mellon’s headquarters in lower Manhattan to hand deliver our letter to Chair of Corporate Social Responsibility Heidi DuBois outlining the many ways that Elbit is responsible for death, repression, and war crimes. Her response was that they take the issues we raise “very seriously” but that investments reflect fiduciary responsibilities to clients.

Help us tell BNY Mellon there is nothing sustainable about war crimes, surveillance, and occupation. Divest from Elbit Systems!

Last week’s victory by UK campaigners shows that persistent organizing works. Let’s put the pressure on BNY Mellon to live up to the corporate social responsibility values they claim to hold. Join us in telling them to divest from Elbit. 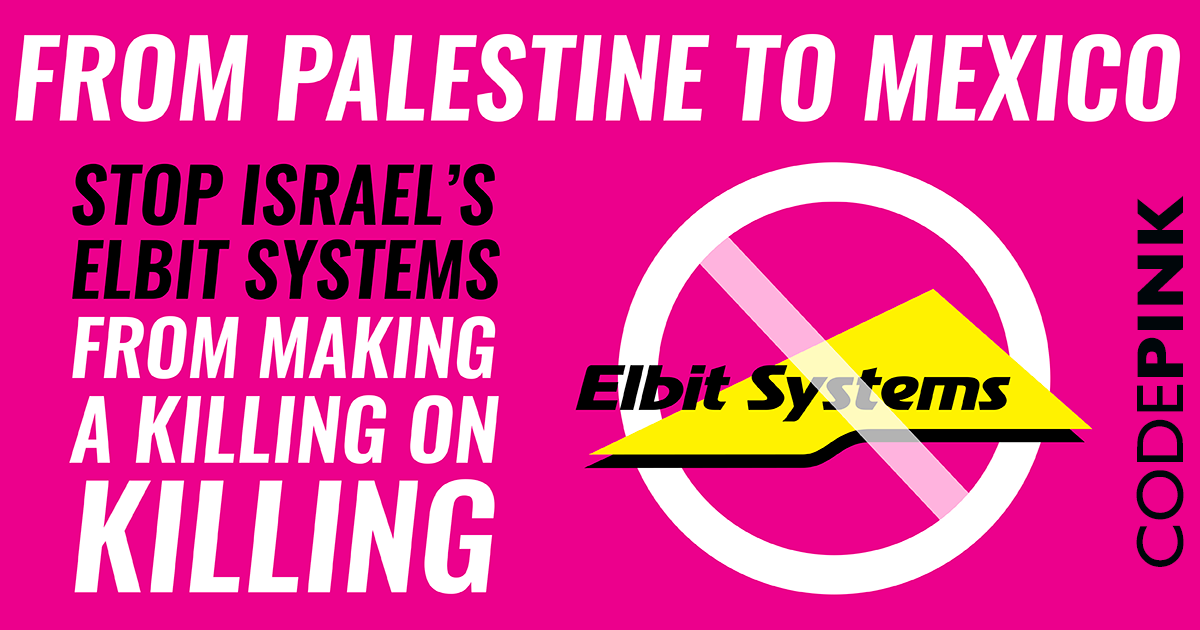 The Israeli military is able to maintain its oppression of Palestinians due to military hardware created by Israeli weapons company Elbit Systems and financed by international banks. Bank of NY Mellon claims to be committed to socially responsible investment and the UN Sustainable Development goals but holds over $6 million worth of shares in Elbit Systems.

Elbit manufactures surveillance and weaponized drones, surveillance technology, and white phosphorus, a substance of chemical warfare. They recently sold Israel cannons for internationally banned cluster munitions. In the U.S., Elbit contracts with the Department of Homeland Security for surveillance along the U.S. Mexico border.

From Palestine to Mexico, Elbit is profiting from war crimes, repression, and death. Tell BNY Mellon to divest from Elbit Systems and all companies that profit from violence.

It has come to our attention that BNY Mellon is invested in Elbit Systems, Israel’s largest arms company.

Elbit Systems has been involved in all of the major assaults Israel has undertaken against the Palestinian people in Gaza including the 2008-2009 assault on Gaza which killed over 1,400 people; the 2011 assault which killed over 150 people; and the 2014 assault which killed over 2000 people. In each of these assaults the majority of those killed were civilians. For example, in the 2014 assault, over 550 children were killed by Israel. Since March 30, 2018 Israel has used snipers to kill more than 200 Palestinians including children, medics and clearly marked press while thousands more have been seriously injured.

Investing in Elbit Systems undermines efforts for a peaceful solution between Israel and the Palestinian people and ignores guidance from the U.N. and human rights organizations.

In April 2018, Amnesty International stated that an arms embargo against Israel was needed because they continue to shoot unarmed protestors in Gaza. An arms embargo of Israel begins with banks like Bank of New York Mellon divesting from Elbit Systems. We strongly urge you to follow the example of HSBC in 2018 and Dankse Bank in 2010 and end your investments in Elbit Systems.