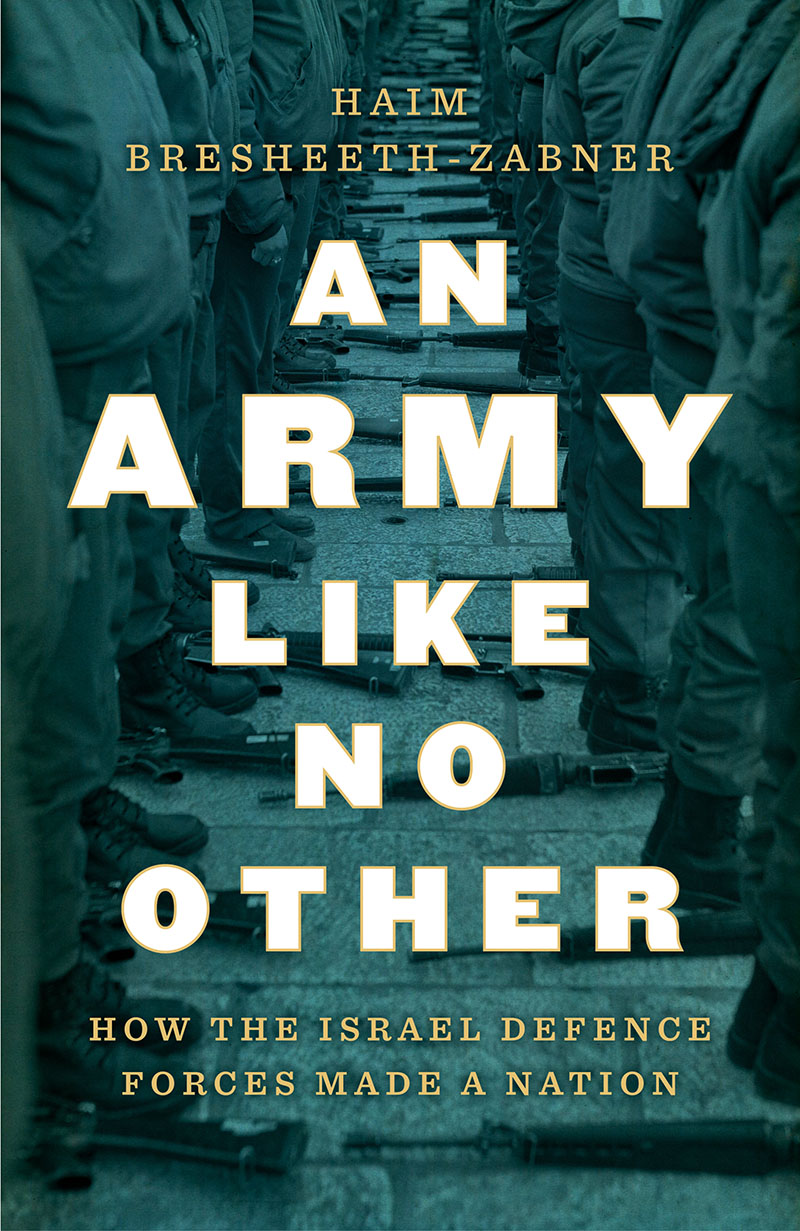 The Israeli army, officially named the Israel Defence Forces (IDF), was established in 1948 by David Ben-Gurion, Israel’s first prime minister, who believed that “the whole nation is the army.” In his mind, the IDF was to be an army like no other. It was the instrument that might transform a diverse population into a new people. Since the foundation of Israel, therefore, the IDF has been the largest, richest and most influential institution in Israel’s Jewish society and is the nursery of its social, economic and political ruling class.

In this fascinating history, Bresheeth-Zabner charts the evolution of the IDF from the Nakba to wars in Egypt, Lebanon, Iraq and the continued assaults upon Gaza, and shows that the state of Israel has been formed out of its wars. He also gives an account of his own experiences as a young conscript during the 1967 war. He argues that the army is embedded in all aspects of daily life and identity. And that we should not merely see it as a fighting force enjoying an international reputation, but as the central ideological, political and financial institution of Israeli society. As a consequence, we have to reconsider our assumptions on what any kind of peace might look like.

“It is said that Israel is an army with a state. This book validates fully this assumption. With a clear and accessible style and with illuminating of many hidden chapters in Israel’s history, Bresheeth exposes fully the militarizationof the Jewish State. The book unpacks successfully the military grip of the IDF on every aspect of life in Israel and Palestine, from crucial decisions of going to war to the formulation the policies towards the Palestinians. Even if you are a knowledgeable reader on the topic, this book will be an essential contribution to your library.
– Ilan Pappe, author of 10 Myths About Israel

“Israel’s drive to become a modern-day nuclear Sparta could only be ensured by An Army Like No Other—an army at the centre of illegal occupation, the creation of settler-colonial facts on the ground and Israeli identity self-fashioning. Thoroughly researched and painstakingly documented, this book is a must for those seeking to understand the centrality of the most powerful institution of Israel and for those who wish to see a just and lasting solution in Palestine–Israel.”
– Nur Masahla, author of Palestine: A Four Thousand Year History

“An original and a remarkable interpretation of the wide-ranging impact of the military on Israeli society and one of the most insightful and challenging works on Israeli society from 1948 to our days. His book traces the ways in which military power acquired legitimacy in the civilian society and how the use of organized violence became an acceptable solution to all conflicts in the Arab-Israeli history. Anyone interested in understanding the Middle East should read this book.”
– Shlomo Sand, author of The Invention of the Jewish People

“Israeli left-wing critics of the Zionist state have long described it as ‘an army with a state, instead of a state with an army.’ And yet they have produced very few studies of the Israeli military-industrial complex over the years. In helping to fill this gap, Haim Bresheeth makes a crucial contribution to the critical study of the Zionist enterprise.”
– Gilbert Achcar, author of The Arabs and the Holocaust

“Bresheeth—one of the most important anti-colonial intellectuals of our era—takes the Israeli army as an entry point to undertake a deep analysis of Jewish-Israeli society. The original contribution of the book lies in its ambitions and scope: Bresheeth brilliantly describes the way an army whose ethos is rooted in Jewish historical trauma, has grown to become the occupation arm of zionism, the motor of its settler-colonial domination and the basis of its politics of separation.”
– Eyal Weizman, author of Hollow Land

“This book places the Israeli army under an uncompromising lens. It reveals a yawning gap between the propaganda about ‘the most moral army in the world’ and the dark reality. Through a wide-ranging historical survey, studded with little known facts, it exposes the army for what it really is: a brutal police force of a brutal settler-colonial state. Essential for understanding the political sociology of Israel today and the reasons for the impasse in the Israeli-Palestinian so-called ‘peace process.’”
– Avi Shlaim, author of The Iron Wall: Israel and the Arab World

“A hard-eyed look at the role of Israel’s army in the creation of the Jewish state.”
– Kirkus

“This is a very important book, offering a highly timely and rigorously documented view of the military/nation-state nexus in Israel, its links and dynamics, and its global sources of power. In the process it unavoidably affords us a view of the workings of the contemporary global order, in which Israel’s role as policeman and instrument is becoming more critical to the repressive, discriminatory and surveillance operations that are being increasingly developed and deployed today.”
– Lena Jayyusi, Journal of Holy Land and Palestine Studies

“Bresheeth-Zabner has written a comprehensive and well-researched history of the Israeli military. In doing so, he has also issued an indictment of its brutal tactics, its political power and its destructive effects on the Israeli state.”
– Ron Jacobs, Counterpunch

“An Army Like No Other is a real page-turner, combining history and analysis with firsthand tidbits from within the belly of the beast … Bresheeth-Zabner deserves substantial praise for his pursuit of truth.”
– Belén Fernández, Jacobin

“An insightful look into the history of Israeli militarism and the military ethos that marks both state and society.”
– Rod Such, Electronic Intifada

“Discredits the propaganda of ‘the most moral army’ meticulously, revealing an institution that is historically violent and which needs the perpetuation of further violence to sustain itself. This is a must-read book.”
– Ramona Wadi, Middle East Monitor

“By looking at the army as a way to understand Jewish-Israeli society, Bresheeth-Zabner has produced an insightful analysis, a key to why this state is a problem for the Palestinians, the region and for a world where a militarised, racist nuclear state will not look for peace.”
– Miriam Scharf, Socialist Review